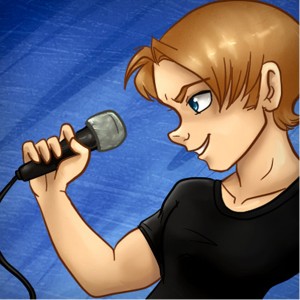 I’ve always been interested in Media, Cartoons, Anime, various Geek things, and news. So what did I do? I combined all of them into one thing!

My Geek Confessions is an evolution of a show I started back at Weber State University called Webertainment Weekly. (If you want to hear some past episodes you can for now.) There it was voted the number one program while on KWCR 88.1 Weber FM.

At Weber State, I graduated with a Bachelor of Arts in Communication – Electronic Media with an emphasis in Entertainment. At KWCR, I was the Sponsorship Director (Sales/Marketing Director) as well as a reporter for the Signpost, the University newspaper, as well as for Weber State News, the television news program.

In my spare time (aside from the show and blog) I like to weight lift, sing, write, act, be a fledgling voice actor, and many other hobbies. I love to identify voice actors from their voice alone and direct people occasionally as well.

I’m well versed in computers, marketing, accounting, learning to create websites, and many other different talents. So if you’re wanting help or advice on anything, drop me a line.

Also you can stop by my portfolio website ZachJenkins.com, where you can find out a lot more about me. 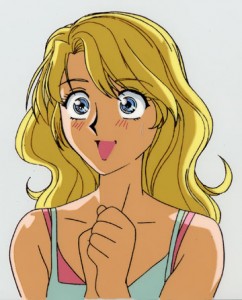 Still a California girl at heart, I long to return to the beach and Disneyland. My greatest loves in life are cartoons/anime, movies and the voices that come from them, music and writing.

I’ve always loved the craft of animation since I was little. I can’t get enough cartoons. Growing up I watched every Disney movie multiple times and read books on animation and Walt Disney himself. My childhood was spent studying the screen and attuning my ears to the voice actors. From a young age I could tell you who voiced who. Now that I’m older, I go to conventions to meet voice actors. As much as I love meeting my anime voice actor idols, someday I hope to meet the voices of my childhood like Rob Paulsen, Jeff Glen Bennett and Jim Cummings. My biggest dream is to meet Miyano Mamoru, however.

Along with my Krista’s Korner, I also have a novel series that’s been in the works for coming on eleven years – Sci-fi/Fantasy YA (sometimes I wonder, though!). I’ve completed three consecutive years of NaNoWriMo and attend a weekly writing group with my friends where we give feedback on each other’s works.

With my love for music, I play the piano. New Age artists like David Lanz and Jim Brickman and composer Hans Zimmer are major inspirations to me. Easy listening love aside, my favorite bands include Goo Goo Dolls, Coldplay, Anberlin, Keane and Switchfoot. I cannot function without music – classical, new age, alternative, rock, foreign. At work, at home, at play, on a drive I’ve got to have it. Going to concerts is seriously one of my favorite things I do. I can’t get enough of the energy the bands give off live.

My dream goal is to have a summer home in Maine, have a comic book shop wherever I end up settling and have a place for geeks alike to hang out, and publish my novel series.

As great lover of unicorns, books, and supernatural television shows, I am selective about my geekdom. Obviously, unicorns run quite high on the geek snobbery scale.

I have seen every episode of Buffy the Vampire Slayer, Angel, Charmed, and Veronica Mars in existence. I am also a huge musical theatre geek, having studied vocal performance and theatre in college, and have seen Les Miserables on-stage way more times than I should probably confess.

When I am not reading, I am writing depressing YA, and when I am not writing depressing YA, I am fangirling over One Direction (shut up, they’re totally cute). While my favorite authors are Orson Scott Card and John Green, I will read pretty much anything except epic fantasy (not a fan of authors who take 20 pages to describe the scenery — it’s the 21st century, people! We have movies, books, and Google to fill in the blanks of even the most imaginative landscapes. This is all your fault, Tolkien. ALL YOUR FAULT).

When I am not being a geek, I like to shop for shoes, travel, and annoy the heck out of my cat.