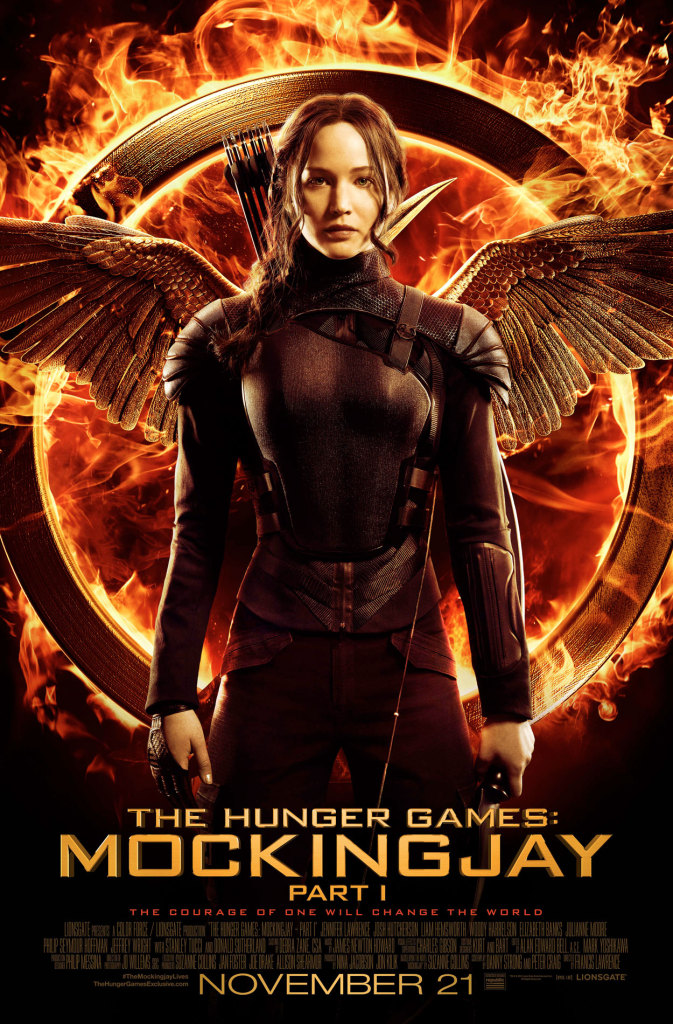 Mockingjay Part 1 starts off right where Catching Fire left off – Katniss waking up to the nightmare of Panem in war over what she had done at the Quarter Quell. District 12 is gone, save for her mother and Prim, who Gale was able to rescue before the Capitol bombed their district. The film takes the majority of its place in the underground District 13 which is a highly structured society, lead by a woman named Alma Coin (Julianne Moore). Visually I was satisfied with what I had pictured when I read the book.

Coin and Plutarch are heads of the rebellion against the capitol and they want Katniss to basically be a figurehead in the war to rally the other districts. She is hesitant about this for sometime – overwhelmed over everything, understandably, and rightfully not thinking she’d make a difference in the state of Panem. Eventually she agrees under the pretense that they will rescue Peeta, Johanna and Annie and they will be pardoned being traitors. Eventually Coin folds, and they begin to shoot propaganda videos to broadcast how the capitol is effecting all the Districts and that their “Mockingjay is still fighting, and they should, too.”

In between their efforts and their plannings for physical attacks, Peeta is televised with Ceaser as a form of interview and it shows just how disconnected from things he has become, not to mention tortured. Seeing this get to Katniss, as is planned by Snow, and her reactions often override the decisions that need to be made.

Gale leads a team to the capitol and they rescue the victors, only problem is is that Peeta has been tortured with Tracker Jacker Venom and has gone crazy and tries to kill Katniss! The film fades with Katniss watching him struggle in a gurney while being strapped down.

For a lot of things not happening, there sure was a lot of movie. I worried about the announcement of Mockingjay being split into two books as I knew it would have the same problem as the last Harry Potter adaption – Part one would be long, actionless things that are drawn out and Part Two will be action-filled and busy and invasion of senses of sorts. The first part of the last book didn’t have me raging, so I didn’t mind the film of Part One. Quite enjoyed it and it even made me cry a little.

Overall I’d say the movie was the less painful way through the book. I know I’m of the minority in saying I did not enjoy Mockingjay, but I literally threw it across the room when I finished it, but those reasons won’t be happening until Part Two. I say less painful because you are out of Katniss’ head. The books are first person, so all through this you get to read her confusion with the war and stupid love triangle debate of Gale or Peeta and miss out on a ton of information that is much easier expositioned on film.

Throughout the series you see her social indifference’s evolve overtime, but I always felt she didn’t care much about what happened to people she didn’t know. So when she goes to the other districts, it does feel real to her. In relation to the movie, when they are starting the prop videos they find her acting to be terrible and decide her most endearing moments are when she acted of her own accord. And not just on her own, but for her own benefit and it’s not exactly the best qualities you want in an acting figure of a rebellion. If Katniss had her way, she’d take her family, Gale and Peeta and abandon the world and it’s that that makes seeing her as a hero or role model as wrong. At least in the movie you don’t get to see/read her thought process as much so she seems much more pure hearted. But her actions strike a cord in the public eye and I guess that’s all that matters.

Visually speaking, you could tell the budget difference from the first film. It was very well done effect and set wise. Kudos to all the actors as well.

We’ll see how I end up liking Part Two, but I know I’m not all that excited about it.