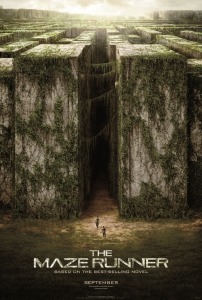 In a world where we are fascinated by a post-apocalyptic world and putting our faith in younger generations, we have another title to add to the list – The Maze Runner. This isn’t a slam on the genre as I’ve read some and enjoy them, but over the years they’ve become over-saturated. However, Maze Runner had some things in it that I appreciated.

Immediately you are thrown into confusion as our main character, whose name has yet to be known by him or anyone, is in a dark rising elevator shaft. Once he reaches the surface, he’s greeted by a large group of boys. His mind in disarray, he resists against them, struggling for answers and escape and is thrown into a makeshift prison in the ground until he calms down. His calming is enough where he doesn’t run away, but still asks a lot of questions, such as “Why can’t I remember anything?”, “Why are they all in this field surviving together?” and “What is that huge wall?”

That night a party is held for the new comer and he gets in a bit of a tussle with the local brute/muscle  and he hits his head and remembers his name, Thomas.

The next morning Thomas wakes up and goes straight to the wall as he sees a few guys go inside the opening. Chuck, a tubby little kid who used to be known as the Greeny, slips that within the walls is actually a large maze. Every day they send a group of runners through the maze to find a way out, unfortunately every night the maze shifts. For three years the runners have tried to find a way out and no success, or so we are lead to believe.

Thomas wants to volunteer to be a runner as he seems to be the only person that wants to have answers and be out of there immediately, which kind of leads you the viewer to believe that maybe he is different.

As the movie progresses Thomas eventually gets into the maze and uncovers clues that someone is purposefully keeping them there for a reason. The gathered boys must do more than just survive and be content with their lives and find their way out.

Considering I’d only seen one trailer and hadn’t yet read the books (I know, I’m bad) I didn’t know what to expect. I knew it was YA post-apocalyptic and written by an author that wrote some books from the publisher I worked for. I’ve met the author, even. These YAs seems to be written by women, so it was refreshing to have a male take on it. I did get a little weary as soon as a girl showed up that we’d get into love-triangle territory and we did not, thus I was grateful – cause I’m cool not having romance all the time.

I also appreciated a young cast. There were some liberties, sure, but for the most part they were close to the age they should have been or at the very least convincing. Not only that, the acting was really good for these young and budding actors.

For book to movie films is when I’m thankful having not read the book. I could tell maybe there was a little more details and exposition in pages, but for what was presented I was pleased and had enough information to get the plot and motives of the characters.

I was very impressed with the effects as well. I thought this movie was going to be more on the low budget side, but it totally wasn’t. The Grievers were the creepiest thing in existence.  The Q&A we had the pleasure of seeing after the preview revealed they were indeed in the outdoors the whole time and I love real locations.

The action and tension really kept my attentions. No shaky cam! I’m not going to spoil any more because I really enjoyed this film and I’d hate to ruin the unveiling even if it’s become kind of an obvious trope of late.

For a year with dud middle-of-summer films, this really could have made money being released in July! But here we are near done with September with the movie season dropping off. SO, since there is nothing else out, definitely got see The Maze Runner! If you love The Hunger Games, Lord of the Flies and LOST, you’ll definitely enjoy this. If you like mystery, survival, decent characters and a good time, you’ll also like this movie.

I’d give it four stars!