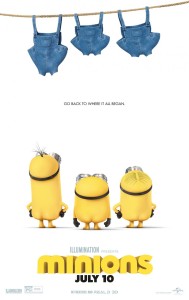 – The stand-alone Minions movie that is a retcon of Despicable Me and Despicable Me 2, where instead of the minions being created by Gru, they evolved from single-celled organisms and wish to serve the most evil, villainous person around. The only problem is that they have a tendency to KILL those that they serve throughout history. This means that this should be the saddest children’s movie ever created since the minions keep killing those they love while actually doing the world a favor by taking out the worst of any species and ensuring that survival of the fittest would be a force for good. After the rest of the minions move to Antarctica, 3 minions set out in the world to find a new master and go to Villain Con (a San Diego Comic-Con equivalent YEARS before something like it existed. Also strange how much everyone seems to love villains but not like them that much by the time that Despicable Me comes around)  and start to work for the female super villain Scarlet Overkill and her husband Herb Overkill. They are tasked with trying to steal the Royal Crown jewels from the Queen of England, and through regular mishaps, fail to do that and only make matters worse and depose the Queen before setting things right (on accident) before they meet Gru, who we should by all accounts, be surprised actually is alive by the time Despicable Me comes around. 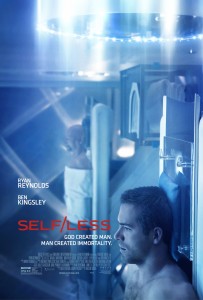 – A rich billionaire Damian Hale (played by Ben Kingsley) is diagnosed with incurable cancer and is presented with a new medical procedure called “shedding” that’s basically body-switching into a younger healthy body that is supposedly brain-dead and has no relations. Given a new life as Edward (played by Ryan Reynolds), Damian discovers that the body that he now inhabits has more of a past than he was told and the actions of the those that perform the body-switching are actually performing criminal acts and now that he knows, they are trying to kill Damian and any others that might know their secret. 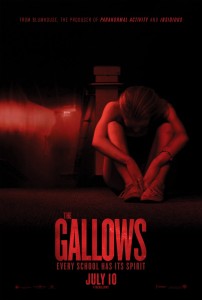 – The Gallows is already infamous as it’s the source of the Charlie Charlie Challenge that was sweeping the internet earlier this year but ended up being only a viral marketing stunt that ended up catching on for a short moment. The whole Charlie Charlie Challenge is linked to the death of the student Charlie Grimille that happened at a high school play 20 years ago and his spirit that now haunts the school. A group of stupid teenangers break into the school at night as the school is attempting to restage the play (in an of itself a dumb idea) and find the ghost of Charlie is out for blood and revenge.