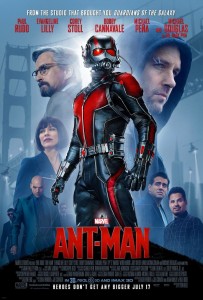 – The latest addition to the Marvel Cinematic Universe. Instead of the usual origin of Ant-Man with Hank Pym (who originally was the one that created Ultron in the comics but changed in the cinematic universe) the movie focuses on Scott Lang but keeps him as the second Ant-Man. After serving time for a burglary but wanting a chance to go straight for his daughter, Scott Lang (played by Paul Rudd) is recruited by a retired Hank Pym (played by Michael Douglas), the former Ant-Man, to pull a complicated heist to steal and destroy another shrinking particle and super suit before it gets out and could threaten the safety of the world. There are two different end credit scenes plus some great cameos so be sure to pay attention and stay to the end. The movie was originally was to be directed by Edgar Wright but was replaced by Peyton Reed but has kept a lot of the humor and style of the original but keeping it more in line with the rest of the Marvel Cinematic Universe. 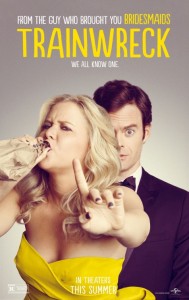 – Though you’d expect something completely different from the poster (at least I did thinking they were getting married or met at a wedding), Trainwreck is about a woman who has the free wheeling lifestyle that most guys like to have until she meets a sports doctor that actually likes her and changes her viewpoint on relationships. The newest Judd Apatow movie (which explains a lot there too) is also written by Amy Schumer and also surprisingly stars both John Cena, who I’m still surprised to see him in a mainstream film, and LeBron James,who I’m surprised to see acting in a film at all and seems to be fairly capable.