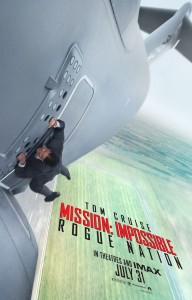 – The IMF (which means Impossible Missions Forces but seems like it’s never explained) is shut down just as the team finds evidence of the existence of The Syndicate, their legendary evil counterparts that are carrying out terrorist attacks around the world in an attempt to overthrow governments and establish a new world government. Ethan Hunt (played by Tom Cruise) gathers the rest of the now disbanded IMF team to track down The Syndicate and stop their plan for world domination. Be warned that they stopped the filming of this movie halfway through so they could “come up with a better ending” so it still may be rough.

– Rusty Griswold, now all grown up and with a family of his own, tries to create his own memories by taking his family on a cross-country vacation to Wally World, apparently learning nothing from his previous family adventures. However from the looks of it, instead of being a critique of family vacations with some irreverent humor, the movie seems full of modern gross out humor.