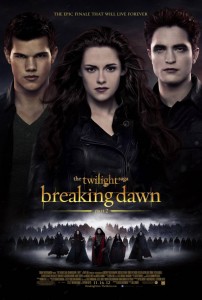 – Finally the last movie (though there are talks of a TV series. God I hope not.) of this franchise. Bella has a bad childbirth and is turned into a vampire. Their daughter (whose name I’m sure I can’t pronounce) Renesmee grows incredibly fast. There is a misunderstanding and the Cullens and everyone else has to fight. Oh an apparently vampires also get like mutant powers for some reason. Even in the trailer the fight scenes look ridiculous so have fun watching that.