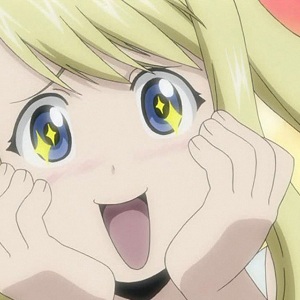 I’ve recently been asked how I decide to watch an anime. There are so many out there I haven’t watched that are several years old and more and there’s more each year. So what kinds do I find worthwhile?

I’m not any sort of expert or critic. I’ve just come to know over the years of being an anime fan, what I like. And how to recognize a series I won’t like. In the last few years I’ve used randomc.net to check out their “Season Previews” and they list the upcoming series that are 12 to 52 episodes long at a time, brief description of the anime, a sample image, and cast.

First thing I look at is the Art of the poster image. I can usually tell a lot about a series on that alone. If the characters are teens and look like they are five, I will not watch it. I do not like over-bearing anime art with huge eyes and tiny mouths. If the art is too jagged and square it turns me off. If the women are wearing next to nothing and their boobs are larger than their heads, then I’m inclined to say no. I’m typically open to unique styles, however. Most of the time the art will tell you what the genre is, but sometimes not, which leads me to-

Genre. If the art catches my eye, I’ll glance over the summary and see what the genre is. If it is Fanservice/ecchi or slice of life, I won’t touch it. If it says Action/Suspense/Thriller/anything else, I read a bit more into it and my curiosity is more piqued by-

Cast. There are instances when the cast is what makes it or breaks it for me. If I don’t recognize any names, I wait it out to see a hype of a series. If it has several voices that I love, you bet I’ll watch the first few episodes to check it out. There’s many times I don’t regret it, either.

If at least two of the three of these are savvy to my eyes, I will download or stream the first three episodes. If the pacing of the plot turns out to not be as the summary described or I don’t care about the characters, I drop it or put it on hold to finish later. I rarely do this, however. I tend to stick it out and just rate it low. I have a handful of titles I’ve tried and given up.

However, there is one name that will make me watch it no matter what it is. I’ll blog about him in a later entry. 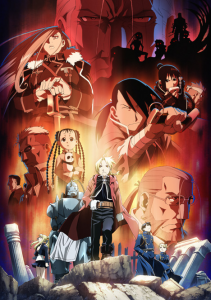 Two brothers perform the taboo of human transmutation to bring their mother back, only to find there are consequences. Through their journey to find a way to retrieve what they have lost of themselves, they discover how corrupt the government is and the evil that lurks underneath the city that controls them.

To me, FMA has everything anyone could ever want in a series – diverse characters, rich storyline, gorgeous art and music, drama, politics, comedy and romantic implications. It’s the series that people have been and always will talk about for years to come. Back when it was airing and the manga was still being published, I’d spend hours theorizing. And after it was over, I’d spend hours in awe thinking of how perfectly constructed it all was. 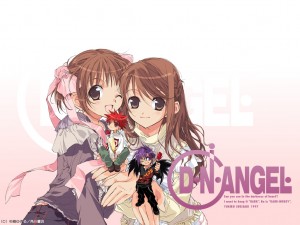 Daisuke Niwa is an average boy, until his fourteenth birthday and he inherits the Niwa Family Curse to become Phantom Thief Dark and steal art and artifacts to seal away ancient power. In order to break the curse, Daisuke has to find his Sacred Maiden to love him.

I don’t tend to like school life/romance anime, but there’s just something charming about the series for me. Before it was licensed in the states I was enamored by the art and premise. Watching the anime and reading the manga (comic) side-by-side I’ve come to love it. The anime and manga are very different each other as it is incomplete, unfortunately. 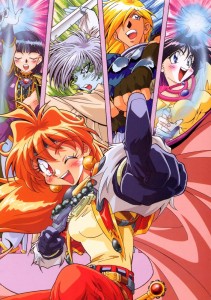 Lina Inverse is self-proclaimed sorceress extraordinaire and ‘bandit killer’. But really all she wants is money and always a good meal. When the Dark Lords show up, it’s up to her and her band of unlikely heroes to save the day. As long as there’s a feast waiting for them at the end.

Slayers will always be a classic anime. If you mention it to those that have seen it, there’s always a nostalgic sigh. It’s a fun series. Hilarious banter and magic? What more can you ask for? 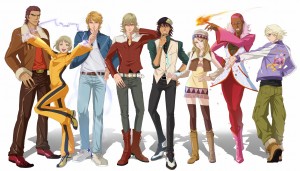 The veteran hero Wild Tiger has always preferred to work alone, but now he’s been assigned a rookie as his partner, who has a different perspective on being a superhero. Their heroic duties are documented on a television program for all the city to see and they battle other heroes to be at the top, until more serious things start happening and the points don’t matter.

Admittedly, I started watching this series out of love for Studio Sunrise’s original series’ and I was thoroughly pleased at how good it was. It has a very Westernized feel about it. Like one of those shows you wake up to watch on Saturday mornings. And Kotetsu is pretty much the best character in existence. 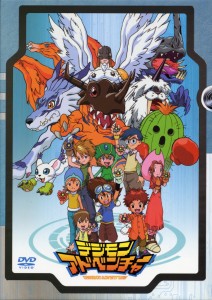 Each season of Digimon is different, but basically children are called to the Digital World to save it from destruction, because if it is destroyed, so is our internet and electronics!

Digimon is like Slayers in the nostalgic category for me. It never gets old, despite it being twelve years running and aimed at children. There’s just something magical about watching a bunch of silly children have talking pets fighting the bad guy(s)! 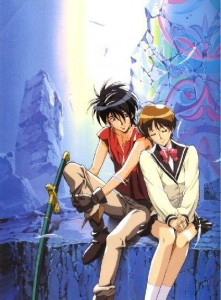 Hitomi is transported from Earth to the magical world of Gaea, where she meets a prince, Van Fanel, and is caught up in his quest to unite the countries of Gaea against an evil empire. On the way, she discovers a hidden ability and strives to unravel layers of mystery surrounding Van, his past, and the giant machine known as Escaflowne.

Escaflowne is the main inspiration for my novel that has been in development since I saw this series thirteen years ago. It’s a sweet unexpected love story filled with lots of action and mystery and epicness.

A group of friends have customized their microwave into a device that can send text messages to the past. As they perform different experiments, an organization named SERN, tracks them down and now they have to find a way to avoid being captured by them. Once the text messages start to work, they discover that messing with time isn’t the best of ideas.

If you’re looking for an intense series, this is one for you. The first half of the series is a bit slow in the set up and intro to the characters, but episode twelve to the end, it’s a nonstop emotional ride. 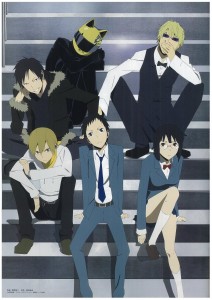 In Ikebukuro, amidst many strange rumors and warnings of anonymous gangs and dangerous occupants, one urban legend stands out above the rest – the existence of a headless the “Black Rider” who is said to be seen driving a jet-black motorcycle through the city streets. Mikado has always wanted more excitement in his life, and he moves to Ikebukuro to be with his childhood friend. But as supernatural events begin to occur he gets mixed up in the commotion breaking out in the city.

This is a series that suffers from the ‘incomplete status’ of the manga. While some plots are conclusive, there are many that are not, and it leaves you wanting more! 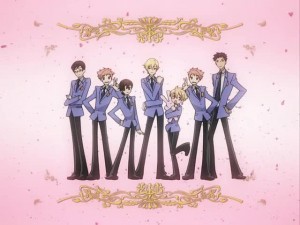 Haruhi Fujioka wins a scholarship to attend Ouran Academy, a school reserved for the rich and prestigious. In an attempt to find a quiet place to study, she stumbles upon the Host Club – a group of boys that entertain and please the girls at the school. Through hilarious turns of events, she knocks over a vase worth more than her life and is forced to join the Host Club – as a boy – to pay back the debt.

Ouran never fails to make me laugh! It’s really silly and makes fun of the harem genre of anime and life in general. Very tender and touching in some parts. 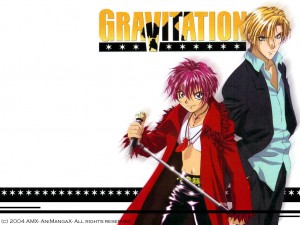 Shuichi wants to be a successful musician like his idol Ryuichi Sakuma. One night in writing lyrics to a new song, the wind blows his paper into a novelists hands who tells him his lyrics are crap. Offended by his comment and unable to let it slide for days, Shuichi confronts the novelist in a fit of rage only to be kissed! Conflicted by his feelings for a man, Shuichi has to come to terms with his love and still debut his music.

It’s a guilty pleasure more than anything, since it’s more or less about a gay couple. But, Shuichi is such a girl, it’s fairly easy to look past it. However, the thing that I love about the series is how hilarious and random it is. The music is also awesome. All the characters are crazy.

As you can see, my favorites are similar and different in a few aspects. Sci-fi mostly, but it’s all about the tone and direction it goes. I love them because the story is engaging, the characters are relatable and wonderful, moving music, or just downright funny – something for every mood. Honestly I could expand more and dissect more of these series for you all, but that would be spoiling things and I’m not going to do that 🙂

If you’d like to see my complete list of animes I have completed, you can view them here at MyAnimeList.