It’s summer and that means it’s convention season! First convention of the year is A-Kon 29. We’d like to thank the staff for having us once more to cover the event and arrange for us to interview guests and sit in on special events.

When A-Kon moved to the Fort Worth Convention Center, we knew there would be some adjustments to the location. After one year, we see the improvements! While nothing can be done about the long walk around to the Exhibitors Hall, the hall was divided in half by exhibitors and artists. Last year the artists were placed behind the dealers, forcing clients to be halted by official merchandise and unsure if there was an artist alley. Table letters and numbers were clearly marked by hanging banners above, making it much easier to visit artists one would come through specifically for. This small change in arrangement left the artists booming with business and the atmosphere was much better overall. This shift also gave easier access to the food court as well and one didn’t have to walk through Exhibitors Hall to find food. The divide in the exhibitors hall also made for more exits so one wouldn’t have to walk all the way around .

The hallways were less cluttered with music and dancer performers, making movement through the walkways more streamlined. The convention space spread across it and the four surrounding hotels, it never felt too crowded. A full panel room was rare. I think the only panel we were turned away from was the Critical Role one with Matt Mercer. We had the annual guest Li-Sync Battle (at least when Kyle Hebert is in attendance), annual Cold Read (now with Take One Improv troop), Ita-Bag sharing, Name that Tune with Vitamin C, industry showcases with Sentai Filmworks and Aniplex, voice over workshops, and guest Q&As. A-Kon 29 brought Richard Epcar and his infamous 18+ Outtakes throughout his career, as well as Cassandra Lee’s. One of my favorite panels this year was the 3 Vs 3: USA vs Japan Voice Actors. It brought three from each side to share the differing experiences in their fields across the ocean from each other. And FYI, Toru Furuya-san doesn’t mind voicing anyone as long as they are a fine ikemen like himself. This year also brought new comic artists to Texas, though the late hour on Friday made for a small crowd. The Awkward Yeti, Sarah’s Scribbles, Shen Comix, and Fowl Language shared their creative processes as well as how they broke into the business, keep in touch with fans, and keep pressing on despite varying anxieties.

We were impressed by the amount of Japanese musical guests A-Kon had this year. Every day there was one or two musical performances. Unfortunately, they were at odd times and under-hyped. I was elated at the announcement of Mika Kobayashi being in attendance this year, she was my main attraction for the year! I waited in line, got seated late with everyone and was shocked the Main Event room was not even half full. Did the con attendees not know who she was? She sang many vocal tracks for Attack on Titan, surely that would be a draw! But you say her name, and nobody knew. Regardless of the low-turn out, her performance was amazing, her voice is god(ess)ly. I really loved how her show was also a sword demonstration/drama with performers, Kamui! My suggestion for years to come is to try and hype the Japanese guests, especially the musical guests, so people will know who they are!

On the same day, was A New World: Intimate Music from Final Fantasy. This performance was an additional cost to attendees and it filled the room! From the producers of Distant World, New World is indeed a more intimate look into the music with its much smaller orchestra and no choir, but that doesn’t mean these guys didn’t pack a punch! They put on a beautiful concert, showcasing beloved tunes from the franchise. Definitely a highlight of the convention for me and fellow press pals. Please continue to invite guests like these… those that make us love an appreciate what the masters have given us. 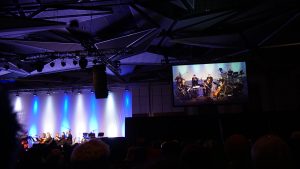 Masquerade had the least amount of entries I had seen at a convention ever. The judging process seemed to take longer than the actual runway and skits. Here’s a collection of the great cosplay we saw this year!

Stay-tuned for our podcast interviews with Andrew Love, Keith Silverstein, and Michelle Rojas! See you at A-Kon 30!