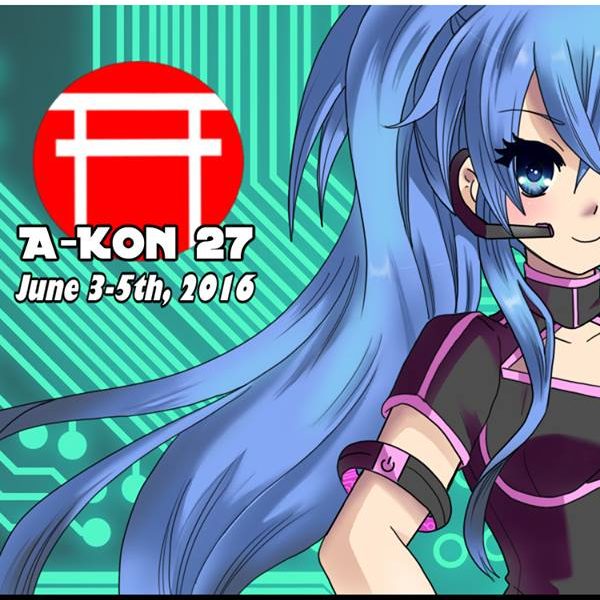 Held at the beautiful Asian-themed Hilton Anatole in downtown Dallas, it continues to hold the 4th largest anime convention’s attendees. I noticed a slight decline in attendance and that’s probably due to Dallas Comic Con (Fan Expo Dallas) being held the same weekend. I’d love to see the numbers as well as see how many people attended both!

One of the things that made our con experience a lot better this year was the mass change in staffing! This new team is working towards making the effort to improve the convention for attendees, guests, staff, and us as press and we couldn’t be happier about this.

Please stay tuned for our interviews in the coming weeks!

A-Kon has always been good at providing a variety of merchandise in the Dealers Hall and, from my own personal knowledge, the largest Artist Alley! Always a plus when lovely artists are familiar faces for me.

Panel rooms not being big enough for the demand is a problem with this growing convention. No shouting from volunteers this year as the biggest panels operated on a ticket system. This helped a great deal. I still feel there needs work done on the scheduling as a lot of guest panels and industry announcements overlapped with each other. I know Saturday is the highest attendance day, but I appreciate them to be spread out. (It also makes it easier for us as press!) Also, all the bands limited the amount of space. Content of the panels, of the ones we were able to get to, were fabulous! Standard Voice Actor Q & A, sneak peeks, fan-run panels, AMV contest, writing panels, etc. We were unable to go to it, but FUNimation brought along Psycho-Pass: The Movie and The Boy and the Beast (a packed house!)

After last year, we’d become weary if we would attend the full weekend or at all, and I’m glad we decided to come. We thoroughly enjoyed ourselves and hope this progress continues!

Check out this year’s foray of cosplay!

See yourself? Leave a comment! We’ll give you credit and a link!

Izuku & Ochako from My Hero Academia

Mako & Asami from Legend of Korra

Bakugo Katsuki from My Hero Academia

A group of Robins

Two Caps and a Winter Soldier

Plasmagica from Show by Rock!

Izuku from My Hero Academia

La Muerte from The Book of Life

Lina & Xellos from The Slayers

Shuu from Show by Rock

Guillmon and Squad car from Digimon

Adventure with Words with Todd Haberkorn