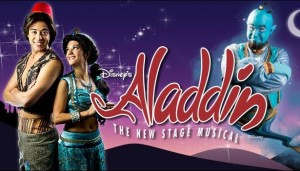 I had the opportunity to travel to St. George with Zach and fellow co-host Melissa and her hubby to see the Aladdin Musical at Tuacahn Center for the Arts this weekend. We’re wanting to make the trip an annual thing as in recent years they have gotten Disney productions there and they are the best, so 🙂

It was very different from the 1992 animated classic, but apparently it was closer to the original earlier drafts of the story. I had to keep telling myself to stop expecting it to be exact to the film. Afterall, Lion King, Beauty and the Beast and Little Mermaid all had extra scenes and songs that made them different. But I guess Aladdin was so different it had a different feel. Not bad, just unexpected, I suppose.

Abu was replaced, or rather replaced them in the final version of the film, three friends of Aladdin – Omar, Babkak and Kassim. They are a group of traveling performers and when they don’t make enough doing that, they resort to stealing. Aladdin’s deceased mother is mentioned by ways of he wanting to live a better life and not wanting to be a thief – be the son she’d be proud of. (And yes, this Aladdin sung a much better “Proud of Your Boy.”) I’m not sure if this is the case with the original draft of the movie, but without Abu, Aladdin faced the Cave of Wonders all on his own. I thought this was an interesting take as Aladdin had to caution Abu about not touching anything but the lamp, then in the musical he was like “Oh, Imma just yoink this treasure 😀 uh… that was a bad idea, oops!” 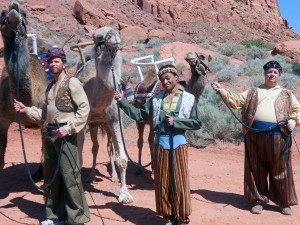 Omar, Babkak and Kassim served more as plot devices and scene movers more than anything, as well as occasional commentators and breaking the fourth wall. They stole the show. I found them funnier than Genie. Makes me wonder if they dropped them so only Genie was the comic relief in the film version. With new characters, brings new songs as well. They opened the play with Arabian Night (whilst riding in on REAL camels!) and had three or four songs that they sung for scene transitions and to Aladdin’s aid when Jafar throws him in the dungeons (rather than being thrown off into the ocean). 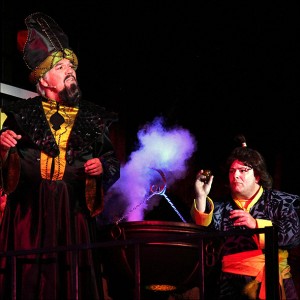 Jafar was fantastic. With all the Disney musicals I’ve been able to see, I enjoy the villains the most. Something about seeing an evil person on stage in an awesome costume is appealing for some reason. They also tend to bring their own sort of comedy as well. Jafar and Iago already had the humorous dynamic master/servant thing going on, but when Iago is no longer a parrot and just a little evil man it’s downright hilarious. We got to hear the abandoned second Jafar song and a few reprises as well. Anyone know if Iago was always supposed to be a parrot?

Jasmine came off as more of a brat and wanting her way than actually wanting to marry for love and it made it harder for me to sympathize with her situation. Being the only female lead, I was hoping for more.

“A Whole New World” was handled nicely. A wooden carpet with Aladdin and Jasmine perched on top of it were hovered over the audience on a zip-line… with no restraints. It would have been horrible if they fell. “One Jump” was extended with more ducking the guards and a double was used for Aladdin to be likened unto cartoon gags. “Friend Like Me” and the Cave of Wonders scene was in 3D. Yes, this was weird. No I don’t hope it becomes a thing. Fortunately it wasn’t a horrible experience.

Tuachan is an outdoor amphitheater and they haven’t shied away from doing what they can with it. The stage is equip with trapdoors, zip lines, fireworks and water lines. The water was used for a projection screen much like World of Color at Disneyland these days. When we saw Little Mermaid last year, the entire play the stage was flooded. With Aladdin being in the desert, the water wasn’t utilized all that much. But, St. George and its red sand was still a great ambiance.

I very much enjoyed this play. It took sometime to get over my initial expectations and take it as its own thing. The cast was amazing. It definitely was a more comical take on the tale. Highly recommended if you want something silly and family friendly and fantastic. You got one more month left! Go GO GO!!!