It’s hard to believe that a year has already gone by and it’s Anime Fest again! Well, it’s short a few weeks before it was last year, but still, this makes this our second Anime Fest since our move to the DFW area!

This year was super busy for interviews and con activities and I did enjoy the lovely balance. I felt at A-Kon we were mostly working and didn’t get to participate much/wasn’t much TO participate in anyway.

2013’s theme was a bit uncertain. The Japanese guests were there for the new Cyborg009 film, but the English guests didn’t compute well. This year it was all centered around Space Dandy and it was great. Not only were the guests the voice talent from the dub, several animators and directors from the series from Japan came! Having the American and Japanese staff interact via translators was really neat. Ian Sinclair (Dandy) had many fanboy moments. On Saturday evening, a watch party was hosted to view the week’s newest episode an hour before its broadcast. The room was far too small for the crowd, but that didn’t make the experience any less enjoyable in the long run. Both the English and Japanese (with subtitles) version was shown and added bonus for awesome episode and small Q&A afterwards.

Also on Saturday evening, speaking of Japanese guests, we got to attend FLOW’s concert. I’m only vaguely familiar with their work as it seems most anime they’ve done openings for I haven’t watched! But I thoroughly enjoyed rocking out at their concert and being deaf for a few hours and praying the floor wouldn’t collapse or the lighting fall on the band! So much energy and great tunes. And they spoke a surprisingly good amount of English! I’m sad I missed out on nabbing their album in the Dealer’s Room.

The cosplay masquerade was on Sunday and probably is the shortest one I’ve attended! I’m used to them being at least three hours and somehow not many people entered (or something) and was only an hour and a half with the small break for judging. I was helping our friend at Comic Attack do video and I was expecting to be sitting for much longer! That isn’t to say the costumes and performances weren’t good, mind you. Anime Fest always seems to have some amazing cosplayers every year.

Throughout the convention you had your usual fan panels, industry, guest, and crafting panels. The Artist Alley/Bazaar was an open space with no real close time as the space was left for con-goers to wander with the Dealers Room having a close time, daily. Again, the hotel and convention space is accommodating for the attendees, even though it seemed there was less this year. Normally it is held Labor Day weekend and I’m certainly curious how it has effected numbers. I know the downpour on Sunday left scarce attendance.

I’d call 2014 a great success! Thank you to all the staff and volunteers that make this show possible every year. Thank you to all the guests that came out as well and gave us some time for interviews – those will be up shortly, so please stick around for interviews with all the American and Japanese industry guests and FLOW!
Sadly, I lost a lot of the photos I took as my cellphone where I had them on decided it was done. Thanks to Kristin at Comic Attack and some from Zach, I’ll include the ones I do have! 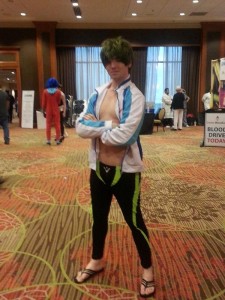 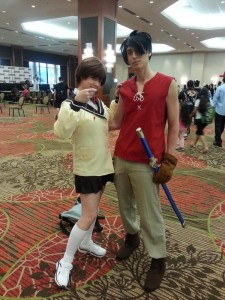 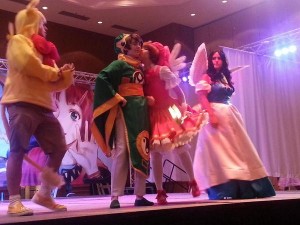 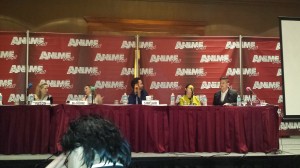 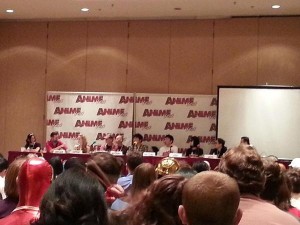 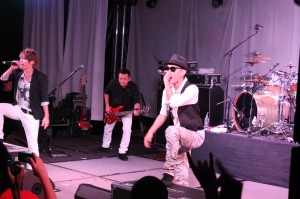 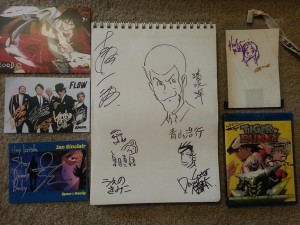 And just for fun: have a progressive gift of our photos with FLOW!