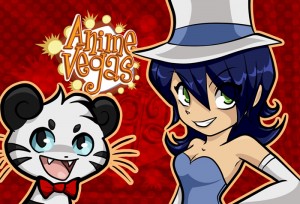 In past years I’ve really enjoyed my time at Anime Vegas. This year, sadly, no. While Anime Banzai has been on the incline of progression, Vegas has been on the decline. As to why, I really can’t say.

While the location makes a difference, the way the convention is run is more important. The feedback panels have always been about where to have it and when. Well… I’d like some more quality people running the place. I think I saw a total of five staff members and like three volunteers the entire weekend. Panels were going over and not monitored, i.e., panelists were not given warnings of when their panels were up and people were coming in for the next panel before the present one was over. While some people stayed in for the next panel, the new people were rude and stood in the back making conversation with no attempted whispering. Attendees behavior is not the staff’s business, but making sure they don’t do stuff like that is part of their job.

Guests had their own panels, but space was limited. Main Events was held in a room that was 1/4th the size of the Alexis. It was ridiculous. There is a theater next door that easily could have turned into Main Events, but there was another event going on that was booked at the Cashman Center at the same time. This is why it’s so important to book your events VERY MUCH in advance. Also with the guests, Zach or I couldn’t locate any of the guest liaisons to conduct our interviews. Thankfully we were able to get in on Press Badges, but we were totally bummed that we weren’t able to contact the guests. But since most guests were only there for a day, it was pretty lame. Was this mentioned in the program? Only two were.

I stood in line on the first day for autographs. The guests of honor were Tara Strong and Tabitha St. Germain, so, you know, a huge deal if you’re familiar with cartoons and the recent mass obsession of My Little Pony: Friendship is Magic. Thankfully with my interest in getting Tiffany Grant and David Matranga’s autographs, I was able to get the ticket for my place in line for Tara and Tabitha. I don’t know if it was their request, part of their contract, their agent or Anime Vegas, but to take a photo with them was $20 and any additional signature was $10. It was off putting. I wanted a photo, but not for that price. I guess when you’re a big voice actor like them people will charge that, but still… going to anime conventions I’ve never had to pay money for a signature. I got my one item signed after waiting in line for an hour and a half.

I’m not sure what has changed at this convention. My first year was fun because I met up with a bunch of online friends and hung out with Vic Mignogna a majority of the time. I remember going to a ton of panels because there was seriously twenty guests. Two years ago I went with a different group of friends and it was also really fun (the only disappointing thing was not getting to go to Little Kuriboh’s panel). Last year wasn’t all that great, but there still managed to be a few fun panels and at least something to go to and the space to go sit in a panel without being overwhelmed by con funk and obnoxious attendees full force and voice actor encounters (like sounding like a creeper to Todd Haberkorn!) Although, last year the only panels that were available after 6pm were 18+. While that’s fine and dandy, it just doesn’t go with the whole “family friendly” environment this convention claims it goes for. Nor allowing a Yaoi booth, but whatever. But when that is THE ONLY option, just meh. This year there were more options, but none that interested any of us.

Maybe the volunteers and staff are just tired of the stale enthusiasm and micromanagement of the con head. Melissa is on staff as graphic designer (that’s her art as the header!) and hearing the inside scoop is ridiculous. Or I’ve just gone to so many cons, better ones, I’ve become jaded. Compared to Banzai’s experience this year, Vegas was just plain awful. There are four conventions in Las Vegas now and all seem to be making better decisions than Anime Vegas has – aka the date and location is decided nearly 9 months before the events and several guests already confirmed. Vegas has been incredibly bad at booking venues in advanced. I know there’s attempt to please attendees, but it’s not going to work if you wait to take polls and you only have three months before the event even happens and you’re still announcing guests two weeks before the convention because you haven’t ‘gotten around’ to posting it. This is when you know you need help.

Not really the con’s fault, but there were two dealers that were up-selling their stuff like whoah. Claiming it was out of print and rare and I call bull crap. But at least it prevented me from spending more money.

Ultimately, the people you go to cons with makes it the best experience. But when no one is having a good time, well… This year, we had more fun hanging out in my time share and perusing Las Vegas. Even though it was freakin’ cold.

But hey! I managed to get an adorable Kotetsu figure (of which Zach assisted in picking the magical blind box)! And a commissioned Okarin button from Melissa! And, and, and several people recognized my cosplay! :D? (I’m the derp in the pink wig) 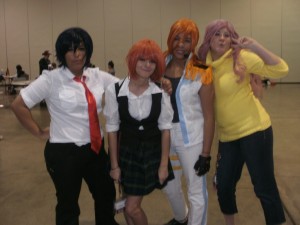 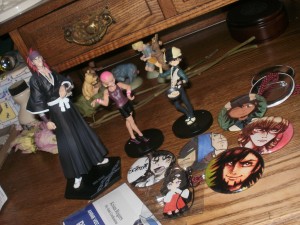 PS: Looks like 2013 is confirmed for Labor Day Weekend and already has Jerry Jewell and Colleen Clinkenbeard as guests. Huh.