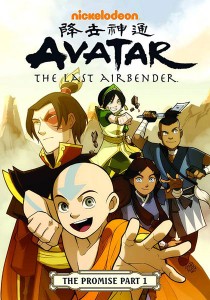 If you’re a fan of Avatar: The Last Airbender, then I’m sure you’ll like the new graphic novel series, “The Promise”. It takes place after the events of the series and, supposedly, leading up to The Legend of Korra.

Aang and Zuko are working together to unify the nations and soon find themselves needing to relocate the Fire Nation colonies in other nations to The Fire Nation. After an encounter with an assassin, Zuko starts to question his decision of initiating this act and expecting his people to comply willingly. Will Aang be able to convince his friend that this is for the greater good?

Plot aside, we have Aang and Katara being gushy at each other, giving Sokka the “oogies” and Toph has started a Metalbending school. Oh, and Zuko is growing out his hair 😉 The gang is back like old times. I really enjoyed reading it. It’s a fun read and has the same tone as the series.

The downside to this publication is that it’s really short. It’s just under a hundred pages. It’s in full color and the art is beautiful, but I was disappointed in the length in relation to the price of the book. But don’t let that stop you! Read it! If you need your Avatar fix, read this! 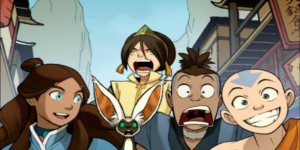