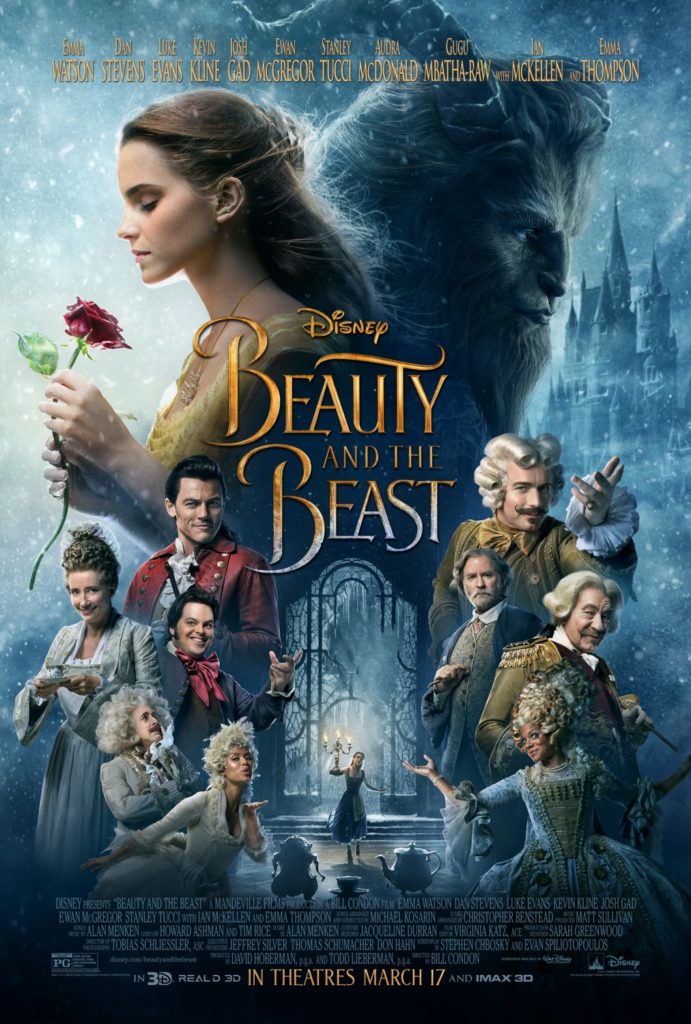 Beauty and the Beast is the latest in Disney’s live-action remakes that may or may not need to be a thing. The beloved animated classic takes to the screens once more, but with real actors in elaborate customs and sets filled with CGI figures.

Due to Beauty and the Beast being 90% a replica of the animated film, unlike Cinderella and Jungle Book, I am going to talk about the differences that were made, as well as my likes and dislikes.

The Prologue: The scene with the prince and his subjects is expanded with a ball of dancing and an aria. The old beggar woman knocks and stumbles inside from the storm. The prince is cruel before she even asks for shelter and throws the rose in disgust. There’s a little more backstory throughout the movie, saying that his father had a temper and got progressively worse after his mother passed away, thus the prince developing said temper, painting him more sympathetic when the servants of the castle speak of their master of old.

One change that improved and clarified the original, was that the Enchantress made it so that the prince and all the subjects in the palace and in attendance for the party being held, were forgotten by the world. Which, when you think about it, does make it very difficult for someone to fall in love with the prince, but it at least explains why the country isn’t at all concerned that their prince has disappeared from society. In the revised lyrics to Be Our Guest, it is changed from “Ten years we’ve been rusting” to an ambiguous “too long we’ve been rusting”.

Belle: Belle is still a bibliophile and the smartest and objectively the prettiest girl in town. In this remake, she is also the one who is the inventor instead of her father, Maurice. Maurice is more of a tinkerer and seems to come up with smaller, not as useful inventions, while Belle invents practical things like a washing machine with a horse and town fountain. She also tries to teach children in the village to read. All of this is frowned upon by the village and why they consider her odd.

It is also revealed that Belle was born in Paris. Her mother died of the plague.

Le Fou and Gaston: In the animated classic, it’s implied that the pair have some history. Here it’s revealed they fought in the war together and Le Fou acts as Gaston’s anchor through his PTSD. When Disney came out to say that the movie would have an openly gay character, of course it had to be Le Fou. But for me, it was insinuated in the original that he had feelings for Gaston. I didn’t find the portrayal particularly overt. Had Disney not said anything prier to the premier, I doubt anyone would have batted an eye towards it.

Gaston is crueler in this film, his insensitivity and daftness a dangerous weapon. Not only does he try to send Maurice off to the insane asylum before the mob, he tied him to a tree in the forest for the wolves to eat him after knocking him out when he couldn’t take them to the Beast’s castle. You see Le Fou’s loyalties waver in the third act and it’s wonderful to see his change of heart.

Magic Mirror: The mirror not only shows you what you want to see, it also transports you.

Agathe: Agathe is a hermit woman in the village, when in realty, she’s the Enchantress who has been keeping watch over Belle so she’d eventually get to the castle.

Songs: Alan Menken and Tim Rice return to create three new songs. “Days in the Sun” seems to replace the Broadway song “Human Again”. Odd, considering the big deal they made it out to be with the new animated scene on the first release of the DVD. Not sure what the reasoning behind it was, other than toning it down to match the melancholy atmosphere of the rest of the film. “How Does a Moment Last Forever” is a song sung by Maurice and it’s a sweet reflection piece. Celine Dion returns to since the title version. “Evermore” is a solo song by The Beast, lamenting the loss of Belle as she goes to save her father. Josh Groban sings the title version and it makes me happy.

All of the changes and additions I was pleased with. The changes and differences added enough to the remake that it felt fresh. I can’t explain the emotion that overcame me at the sound of the updated “Prologue”… The piano and strings and ahhhh. I know this is the third time Alan Menken has revisited Beauty and the Beast, but I’ll never get over the masterful score. Even knowing that the sets and the moving inanimate objects were CGI, the visuals are absolutely stunning.  The Rocco-era French costumes are always beautiful. Josh Gad’s performance as Le Fou made me happier than I expected.

Emma Watson. She was the weakest part of this movie, which is sad when she’s the main character. I’d listened to the new soundtrack before seeing the film and I wasn’t impressed. Seeing on screen helped, but her acting was so wooden. Luke Evans was lackluster in the singing department, but he made up for it for being a ham. I liked Dan Stevens as The Beast (as well as an actual handsome prince) but I didn’t like The Beast’s design in the remake. So flat and boring in comparison to Glen Keane’s expressive design.

In conclusion, do I think that Disney needs to remake every single animated film into live-action? No. Have I enjoyed them? For the most part. The only one I can say was terrible and not worth watching was Maleficent.