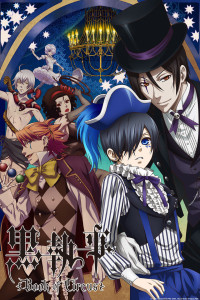 Next is the odd episode numbered, Black Butler: The Book of Circus. Okay, confession time: I have not seen the previous Black Butler series. “Why would you watch this, Krista?” you may ask. It’s simple – Miyano Mamoru. Sigh, yes I’m sad, carry on.

A few months ago Zach and were able to see the Live action Black Butler movie at the Dallas Asian Film Festival. While the movie is set in the future and the new master is a descendant of Ciel’s, a lot of the events still played out the same and I got a general idea of what it all was about. And with how anime goes, I wasn’t completely lost in watching the third (and canon) installment of the animated series.

Noah’s Ark Circus comes in to town and wows London with their grandeur and spectacular stunts. However, children are mysteriously disappearing from the towns the circus has had previously visited. The Queen then, sends Ciel on an investigative mission to retrieve the missing children. Ciel and Sebastian infiltrate the circus and join with them in their circus to display to gain information. As things go, they discover the circus has been kidnapping children and taking them to a person they call father. This very person took part in the ritual that lead to Ciel summoning Sebastian.

For not having seen the previous series, I actually liked what I saw. From what I’d gathered of the other ones there’s lots of fillers and craziness that is just weird, while Book of Circus seemed to keep things more grounded to the plot. Sure humor was dotted throughout as any anime tends to have, but nothing to the degrees of Grell and the manor’s staff running rampant (they make appearances, though brief). The plot continues from the first season and stays on track, and I imagine that’s why it stayed with the ten episodes than becoming disappointing fillers for a span of 26?

A-1 Pictures does have a nicely animated series for sure and that’s up there with my favorite aspects of letting my Mamo temptation win. With the circus thing, there was bound to be a circus inspired soundtrack fit with creepy and happy. The circus character’s designs were also nice, it’s a shame they all end up being villains. Well, people that work for the villain and think they are doing good when they realize they are not. This ends in their fairly tragic demise, so be warned to not grow too attached!

Now that another series has been announced, will I watch it? Possibly at some point, but not likely while airing. It’s hard for me to not watch a Mamo series that people are talking about, honestly. I’ve always been mildly curious about Black Butler as a whole and for me, Book of Circus was a nice indication of what is good and true about the franchise. 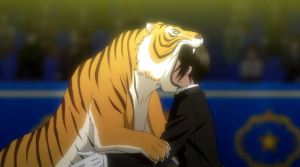