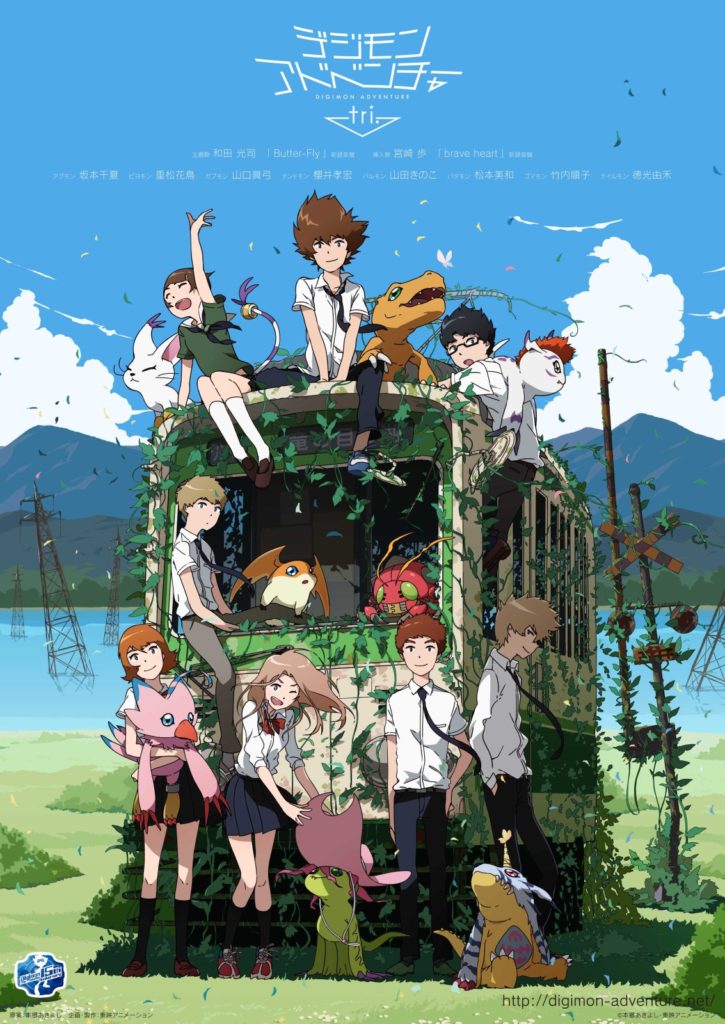 Digimon Tri is a six-part movie series project to celebrate the 15th anniversary of Digimon Adventure! I’m ashamed I hadn’t reviewed part one (Reunion/Saikai) back when it aired in November of last year, BUT, now I get to review it along with the theatrical English dub version.

Six years have passed since the events of Adventure 02 (minus the epilogue, so right after the Owikawa’s fall), landing Tai (Taichi), Matt (Yamato), Sora, Izzy (Koshiro), Mimi, and Joe in High School with Kari (Hikari) and T.K. (Takeru) in Middle School/Junior High. However, in this world, Davis (Daisuke), Yolei (Miyako), and Cody (Iori) do not exist, while Ken somehow does.

Lately Tai has been feeling he and his friends are drifting apart. He tries to invite them to his soccer game that weekend, only to receive varying excuses of being too busy. As he goes to his game alone, he sees a rogue Kuwagumon fly through Odaiba and destroy buildings, as well as confirming it being the cause of technological malfunctions in the last few days. Once Tai is backed into a corner, his digivice that he has always carried with him, activates and Agumon appears and digivolves into Greymon to take on Kuwagumon. Portals start to appear, and the two Digimon enter and exit them throughout the city until they are eventually at Haneda Airport. With his bike destroyed in the chaos, Tai’s teacher Mr. Nishijima gives him a ride. There he meets up with the rest of the Digidestined children who have also found their partners, except for Joe and Mimi. The six children fight the emerging Kuwagumons only to see a giant hand grab the remaining one into a portal and vanish. Mimi arrives from America and is reunited with them all and Palamon. Gomamon leaves them to find Joe.

Tai and Matt visit Mr. Nishijima at school to find out his involvement with Digimon. He explains he’s with an organization that specifically monitors Digimon that have become infected like Kuwagumon. With learning that the Digital World has opened to them once and the Digimon becoming a danger to the real world, Izzy develops an easy access to their partners and a way to see this distortions.

Since Kuwagumon’s appearance and the subsequent damage it caused, Tai feels uneasy about fighting, scared of people getting hurt in the cross fire, not just buildings. Digimon can be reborn into eggs, while humans cannot. His doubt causes friction within the group. He consults Agumon, who is too naive to understand, but believes his partner to do what he feels is right.

The Digidestined are alerted to a new Digimon, Alphamon, in downtown and rush to the scene. There they see the new transfer student, Meiko, with a Digimon in her arms that seems to be what Alphamon is after. They get Meiko to a safe place and all the partners Digivole, but Alphamon is too powerful. Tai is reluctant to evolve Augumon in fear of damage control. Eventually Matt gets through to him and they form Omnimon to defeat Alphamon.

CrunchyRoll streams Digimon Tri as four episodes instead of a feature length film. Seeing Tri in its movie form, I enjoyed it more. There was less time used for Digimon digivolving, less time wasted on Tai’s hesitation of attacking as he flashbacks to the wreckage in Odaiba. The first installment gets the ball rolling for more to come. My review on part two and three will be in time. And still three more to go after that!

I love dubs quite a bit, and going in knowing how Digimon has been in the past with the TV series (the cheesy one-liners, music, and cut scenes) I was expecting much different than what was given. From what I could tell, nothing was changed other than dialogue to fit mouth flaps and keeping their English dub names for consistency sake. Although, they pronounced Genai’s name the correct way. I thought they would alter Meiko’s name, but she remained Meiko. I also wasn’t expecting to hear ‘Braveheart’ play during the evolution scenes!

Hearing half the cast reprise their roles was a huge shot to my nostalgic heart! With each announcement that came in the month proceeding the theatrical release in the states I got so excited! Those that could not return to their roles were replaced with great talents in the business that pulled off some decent voice matching. It was like Digimon had never left us.

Minus my kerfuffle in being able to see this in the first place, it made mine and my best friend’s night! Thank you Eleven Arts for bringing this to the states. The wait was worth it!