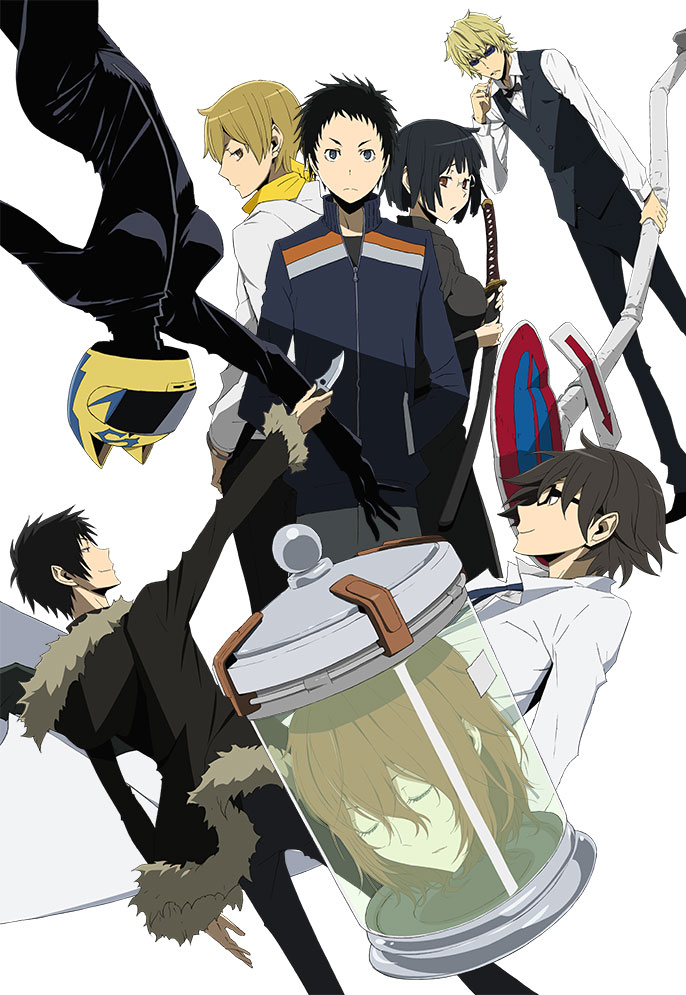 Durarara!! is a difficult series to review. I wasn’t blogging in 2010 when the first season happened, but I did review the second arc/season/chapter (even the season breaks/titles are confusing!). That review was a bit of a mess because, really, that season was sort of messy as it tried to pick up where the 24-episode predecessor left off while building up for more to come. I skipped reviewing the third installment because it still felt like build up where things were a continuous build and more characters were added that may or may not be important later. The fourth installment is where my love of the series started to come back.

Durarara!! has a very large cast with all singular or group of characters having their own side plots within the main plot(s). It’s essentially about a city and the people that live in it, but the general focus revolves around three friends and a Dullahan.

The second and third arc had very little interaction of the main trio and that was a lot of my reason for enjoying the first season so much – while still bouncing back and forth with non-linear storytelling, it still maintained a center about their friendship and their secrets.

As the arcs progressed, they drifted further apart, leaving more room for more characters to be introduced to take a back seat to. Even with the small individual arcs in the first season of the lesser characters, they all, in their own way, connected with the focuses. In part 2-4 I felt some characters did their thing for a handful of episodes and disappeared/became irrelevant to anything, such as: The daughter of the Awakusa Group, Izaya’s sisters and martial arts teacher, the idol star that gets with Shizuo’s brother, and the gang leader womanizer from Saitama. While the Yakuza groups talking to the teen gang leaders like they matter is really out there for me, they allowed Mikado perspective in his power trip as well as Shizuo’s arc, so I’ll forgive that.

Among characters that I felt were an improvement was the reveal of the true antagonist of the series. Kujiragi is better at manipulating people than Izaya due to her being the true owner of Saika (this also builds upon Anri’s arc as well). She hires out to try and kill Izaya to stunt his investigation of her group, as well as steal Celty’s head and move the ball on that story forward.

Durararax4!! is when everything pays off. Mikado has gotten himself into something bigger than he ever imagined. His wish to leave behind a normal, steady life escalated into people getting hurt, and the group he sought to create for escapism he then wants to destroy it. And not just the Dollars: Slowly he starts to bring in members from all color gangs so he can berid the city of them all. In order to atone for his mistake, he then plans to commit suicide as a final closure to the chapter in Ikebukuro. Masaomi makes his way out of hiding to find Mikado to put a stop to all of this. In the end it is Celty who stops Mikado from pulling the trigger on himself. With the injuries both boys sustained in the climactic battle in previous episodes, they are emitted into a hospital and are joined with Anri and there the trio reconcile their pasts.

Now for Celty: Throughout all arcs her head has been missing and she was slowly coming to terms that maybe she didn’t want her head back because it was likely the memories she created with Shinra would vanish. Unfortunately Kujiragi’s efforts forced the head near Celty and two became one. At first you’re lead to believe that her memories had been overtaken by her past Dullahan self, but when she saves Mikado from shooting himself in the head, it’s clear she is still in there. Even when Shinra finds her she tries to deny herself. In the end, Shinra uses the Saika he was cut with by Kujiragi to basically ensure she never leaves again and reverts to the Celty he has lived with for the last several years.

The other characters of the series don’t really have a whole lot of closure. Izaya gets away with almost killing Shizuo amongst a lot of other things he’s done, the Yakuza seemingly backing him up. The Van Gang is reunited with Kyohei once he releases himself from the hit and run (and he was practically off-screen an entire arc).

While there were lots of moments of mulling around with not a lot happening with a lot of things that I can’t recall if they were ever really important in the long run, the final arc and conclusion made up for it. I’d really like to read the books (I own the first one!) and see how they compare. I imagine a lot was condensed for the anime, and maybe the books will expand on some characters/plot lines that I was less inclined to care about that I may actually do so. With the breaks between the arcs, I’ve probably forgotten some details, and I do plan on re-watching the series as Aniplex has simulcasted the dub. Durarara!! is a type of series you almost need to watch a couple times to get the full pictures because of the several characters and intermingled plots within.

Can I recommend Durarara!!? Despite some of my annoyances in the later arcs, the first season in 2010 is among my favorite anime, being the intro to this zany world and being more grounded as a whole. On the surface the series seems like a jumbled mess, but upon further inspection it is several stories wrapped into one and you just have to latch on to the characters that interest you the most and stick with them. And, if you stop at the first season, there are far too many things left unanswered! It has a clever way of storytelling and is a decent addition to urban fantasy. The art style is favorable for the most part and I love the cast of both languages. I recommend Durarara!! to fans who maybe want something a little different.