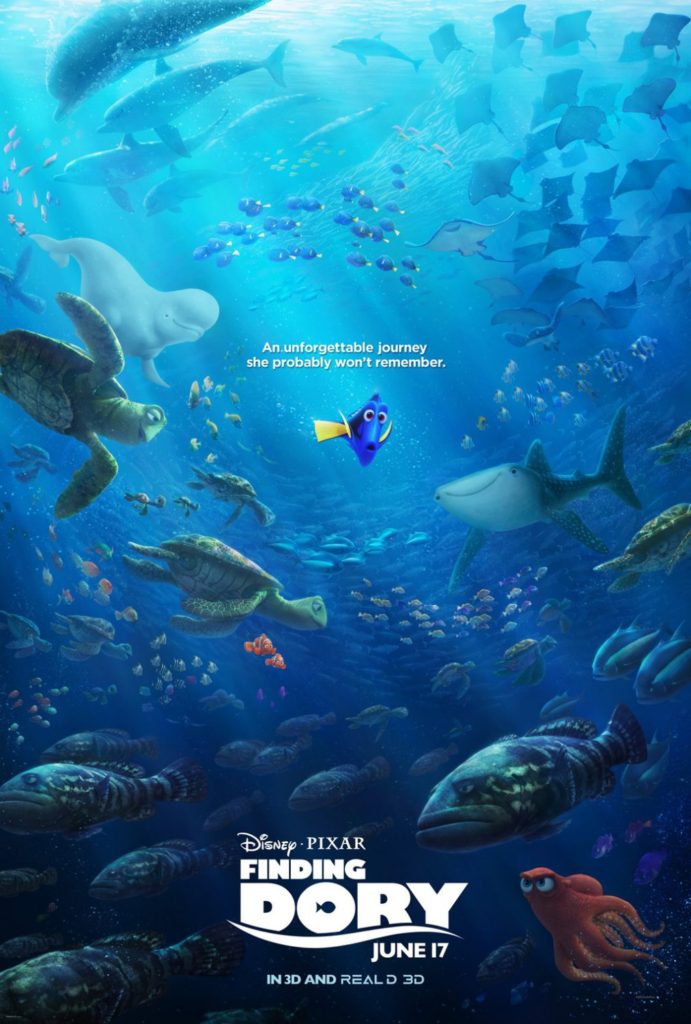 Finding Dory takes place a year after Marlin and Dory find Nemo. Dory is Marlin’s neighbor and often goes with Nemo to Mr. Ray’s class to “help” him teach. During a trip to the see the Stingray Migration site, it triggers a memory inside of Dory and she remembers that she has a mom and dad. Excited about remembering something , she decides she has to find her family and swims with what she believes is her instinct. The Jewel of Morro Bay is soon triggered within her memory.

With Crush’s help, they ride the currant to California. When they get there, they are chased by a giant squid and Nemo gets hurt! Frustrated, Marlin blames Dory’s carelessness. Feeling hurt, though still wanting to help Nemo, Dory swims to the surface and gets caught in six-pack rings.  Struggling at the surface, staff at the Marine Life Institute spot her and de-tangle her from the trash and take her to Quarantine.

Dory meets a cynical octopus with seven legs named Hank. Hank lived a traumatic ocean life and now that he’s healed, the Institute wants to return him to the sea. He’d rather live his life in a aquarium. He agrees to help Dory find her parents if she gives him the tag that she got when she was deemed well. Slithering and camouflaging through the facility, Hank follows Dory’s vague memories and they find themselves in the whale shark exhibit. When Dory starts speaking whale to the near-sighted whale shark, Destiny, the two realize they were friends growing up and would talk to each other through the piping. In the exhibit over is a beluga whale who claims to not be able to echolocate, named Bailey. From the whales, she remembers her home used to be in the Open Ocean Exhibit. Hank begrudgingly helps her get there.

Once Hank drops her into the exhibit, she tries to remember where her home was. Shells in the sand prompt her forward and she sees two crabs. They tell her that all the fish of her kind are being transferred to an aquarium in Cleveland. She asks how to get to Quarantine from here and they say through the pipes. It’s then that Dory remembers how she was separated from her parents all those years ago. Facing her trauma in hopes of finding her family again, she slips through the grates, forgetting the crabs directions. Marlin and Nemo reunite with her there, having had their own adventure in finding her there. Destiny and Bailey guide them through the piping to Quarantine.

They get to Quarantine and the blue tangs are already being loaded onto a truck. Hopping from tank to tank, they get onto the truck, only to find that Dory’s parents aren’t among them – they left to find Dory shortly after she disappeared. As the truck doors start to close, Hank grabs Dory, but forgets Marlin and Nemo. Staff members see Hank and restrain him and Dory is flushed down the pipes of Quarantine and into the ocean. She notices the familiarity of the docks and kelp around her and soon spots shells on the ocean floor. She follows a trail, only to see several trails all leading to one place. Her parents call her from behind, fins full of shells. They reunite with hugs and tears and explain they had been waiting there all that time and that every day a little at a time they left shells so she’d eventually find her way home to them.

While Dory is happy to be with her parents again, she quickly remembers that Marlin and Nemo are stuck in a truck bound for Cleveland. She swims with her family back to the institute and gets Destiny and Bailey’s help. With Bailey’s improving echolocation, they locate the route of the truck. By the power of Otter Cuteness, the truck comes to a stop and Destiny flings Dory into the truck. Dory convinces Hank to help her save her friends and come back to the ocean with her. They hijack the truck and drive it into the ocean, freeing all the aquatic life inside in a few comedic slow-mo montage.

Dory and her parents, old and new friends, all return to the reef.

Finding Dory doesn’t stray too far from Finding Nemo‘s tone or elements, but it is definitely its own movie. All characters from the previous film are in it in some way (just stay until the end of the credits!) It has been 13 years since Finding Nemo and you can certainly see the difference in the CGI rendering. Hank’s introduction scene alone took two years! Speaking of Hank, even if Ed O’Niell is always the perpetual grump with a secret heart of gold, I really enjoyed his character. I adore Ty Burrell in anything as he is generally without shame and it transitions so well in animation. Ellen DeGeneres really shined in this film – One minute I’m laughing and the next my heart is hurting.

This film does a good job making mental illness easy to understand in a careful and considerate way. What once was a joke in one film ends up being the heart in another. It’s clever, really. You can easily take Dory’s short-term memory loss and relate it to another illness in a safe way to help a child, or anyone, to accept themselves. Seeing how Dory was separated from her family and how she basically forgot them for many years and how they were trying to find them is incredibly tragic! Dory is officially the most tragic Disney character in my mind. I will freely admit that I cried when she reunited with her parents! Let’s also not forget how adorable baby Dory is.

I haven’t laughed that much in a theater since Deadpool. Sigourney Weaver as the announcer at the Morro Bay is hilarious in context. Idris Elba as a territorial sea lion was pure genius. A lot of visual puns.

If you liked Finding Nemo, you’ll be delighted by Finding Dory.