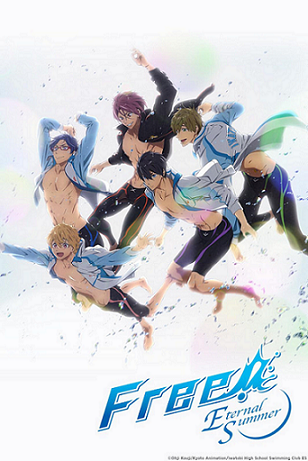 And now, without further ado, I bring you, finally, my reviews of Free! Eternal Summer!

The boys are back and they are noticeably more muscle-y and there’s two more boys at the rival school. (Is it accurate to say rival school when they are extremely chummy with each other?) With the drama with Rin resolved, the first episode almost lulls you into a false sense of security that it’ll be lighter than the first, and possibly the only thing you’d need to worry about was the dreaded Third Years graduating and possibility of not winning at nationals again like a normal sports anime, right? Well, this is not a typical sports anime as it has many slice-of-life elements where the boys talk about feelings and life, so prepare yourself.

ES progresses a lot like the first series, time spent at the practice, refining their skills and competing in the tournaments to advance them to, eventually, nationals, with characterizations and the friendship amongst the boys being more of the focus. The main character focus is still technically Haruka, but I’d say it’s split between Rin and his relationship with new character, Sousuke, who you think will be an antagonist, but really isn’t, and Makoto – the three Third Years. Makes sense, really.

The first episode starts and it’s crazy with all sorts of antics and it finishes with Rin asking Haruka and Makoto what they are going to do after graduation. Throughout the series it is brought up, Makoto trying to get Haruka to think about it, but Haru, being Haru, avoids things that require effort. Being an exceptional swimmer, Haruka starts getting offers from scouts from universities. He declines their offers much to the confusion of others. Shouldn’t Haru be over his weirdness by now? What’s he going to do with himself out of high school?

Both teams make it to regionals and the pressure of Rin and the scouts gets to Haruka and he completely freezes up during his individual event. He’s confronted by Rin and lashes out and becomes distant with everyone. In an effort to ease the confusion, finds out what Haru wants, and try to explain to Haruka that he doesn’t have to swim professionally if he doesn’t want to, Makoto approaches him. While all this drama has been going on, Makoto has also been trying to figure out what he wishes to do after graduation, and during this fight he reveals that he has decided to attend a university in Tokyo. Devastated by this news and feeling abandoned, Haruka runs away.

The next morning Rin shows up at Haruka’s door and takes him to Australia.  There he does some soul searching and sees a world very different from the one in Japan. He meets Rin’s stay-home parents and goes to Olympic park to see real professionals swim for a living. He comes to the realization that swimming is the life he wants.

They return to Japan and with Haru’s newfound purpose, swims with his team to victory. Cue prologue and he and Makoto go to Tokyo together and attend separate colleges.

Now I’m going to talk a bit about Makoto and Haruka’s fight. Fandom was very split on whether Makoto was being a huge jerk forcing Haruka out of his shell or if he was being a good friend. It shocked me so much that a large portion was okay with Haruka remaining stagnant with his life. This leaves me to believe that so many people think that being forced out of their comfort zone is pure torture and going out in the world because it’s scary and it’s perfectly okay to remain thinking that. Why would anyone want to stay sad and angry and feel abandoned or do nothing with your life when you’re very well capable of standing on your own and accomplishing anything you set your mind to?

It’s for this that I am grateful for what ES showed us and I hope anyone with the right mindset will see it as healing. Sure it was a quick turn around (an episode), but for the time that was given, I think it was effective for Haruka’s character arc. At the beginning of the first season, Haruka tells us that he can’t wait until he’s out of high school because his extraordinary skills will no longer be as such – he thinks not being looked at and doted over is what is preventing him from being free. The final episode of ES shows Haru realizing that being free is letting go of the restraints he placed on himself and accepting the responsibilities of being his own. I’ll also point out that he apologized for blowing up at Makoto, and that scene is one of my favorites of the series as it shows just how much they had been hurting and how much they want the world for the other.

I didn’t expect this dumb little series about half-naked boys that talk about their feelings to be fairly profound and sweet, but it was. One of my favorite things of the season was seeing how Rin became softened from the previous season into a confident and passionate swimmer and friend (Makoto totally called him to help talk sense into Haru. It’s brief, but it’s there). Seeing him help calm the storm of his childhood friend, Sousuke, was such a beautiful parallel. I love the friendship all of these boy’s share with one another, especially Haruka and Makoto and how well they understand each other and their happiness means so much to the other.

Kudos to Kyoto Animation’s gorgeous animation in the swimming segments and everything in between. Tatsuya Kato provides the score, again, and it’s serene and moving with piano and strings. I also can’t say enough about this cast. I know I’m biased with Mamo, like, all the time, but whenever he’s involved with a cast I just end up adoring them all as one large package.

As far as we know, this is the end of the swimming anime, minus whatever drama CDs keep being released and the one episode to be boxed with the final blu-ray in Japan. I’m sad to see it go, but I’m one to believe that all good things come to an end. Though I wouldn’t complain for College Free or an exact animation of the High Speed novels. Hmm, maybe I should review those…

But hey! Funimation will be releasing the dub on home video very soon!