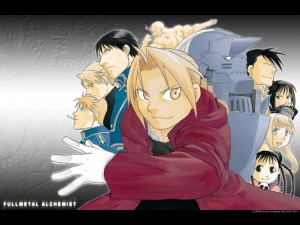 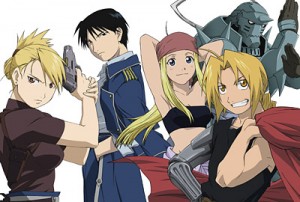 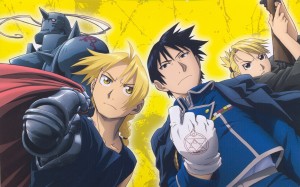 “Humankind cannot gain anything without first giving something in return. To obtain, something of equal value must be lost. That is alchemy’s first law of equivalent exchange. In those days, we really believe that to be the world’s one and only truth.”

WARNING: I will be spoiling the entirety of Fullmetal Alchemist 2003 and Brotherhood. Do not proceed if you have not finished either series and wish to do so. I know it’s been two years since it ended, but that doesn’t always mean anything 🙂 Also, warning for very text heavy.

Today I choose to use my corner to write about FMA, for Wednesday will be October 3rd. And for FMA fans, we know that is the day that Ed and Al burned down their home and started their quest. I love it when series have dates within them so you can have a day to be celebratory. And those of you that remember, I’ve mentioned that FMA is my favorite!

Most people nowadays like to renounce their love of 2003 since Brotherhood was the canon take. I am not like that. Both series have their strengths and lesser weaknesses (and in some cases preferences). Since I’m assuming all you readers have watched both series, I’m going to go right into comparing them.

When 2003 aired, there were roughly 20 chapters of the manga published (and I’m sure around 10 when the anime series got greenlit). For shonen mangas, 10/20 chapter/5 volumes is really small and premature for getting an anime adaption, but it somehow keeps happening… then you get angry fans about filler episodes.

Up until episode 25, 2003 stayed true to the manga (minus the humunculi speaking of “father” being completely dropped. It’s not until later we hear them speak of a master.) The chapters were stretched into that many episodes, which made them more dramatic and gave you time to let things sink in. Which wasn’t a bad call. Though some episodes had no manga basis at all, fit into the 2003 storyline just fine as well as extending the time we get to enjoy the series before things get really serious and what Ed and Al POSSIBLY were up to in their search for the stone in the few years that were fairly left undisclosed in the manga. Example – The fake Elric brothers, Clara the Phantom Thief, etc. All episodes have a character or group connected with the Philosopher’s Stone somehow and that’s why the brothers even go to that location in the first place.

By way of canon events, the Tucker and Nina chapters were extended to two episodes so you got to know them more and your heart and feels were murdered. Then in Ed’s grief, Winry is then kidnapped and he’s faced with fears of death and her death by the hands of Barry the Chopper (who is an entirely different man canonly and who we don’t get to see with his own consciousness in his right body), rather than being attacked by Scar right after. He does run into him at the library, but by then he had renounced his State Alchemist title (momentarily) due to the Nina incident, thus Scar sparing him. It’s not until Ed goes looking for Marcoh about the stone that Scar attacks him for reals.
Then they travel to Risembool for repairs, and on the way is one of my favorite episodes – meeting a war veteran that lost his leg in the. They then return to Central to uncover Marcoh’s notes and discover lab five. There they meet up with the humunculi for the first time and Ed is forced to use the large transmutation circle. Things go awry and Lt. Ross rescues him and takes him to the hospital – canonly he just got beat up a lot by #48 and Envy. I found the being forced to use the transmutation circle to be more gripping as it’s what he wants – to make the stone to return their bodies – and the fact that he declined to do it and it activated on accident… asfhalfjhaf feels.

After Hughes death is when the series started to take a major turn. He was silenced because he discovered the humunculi’s plan. In 2003 it was only for the sake of making a philosopher’s stone throughout time so their master could jump bodies by sacrificing cities/civilizations at a time. While Brotherhood/manga the massacres were for creating a giant transmutation circle throughout the entire world to become God. Course he only figured out the pattern of the bloodshed.

Ed and Co. still go to Rush Valley. What was interesting is in 2003 the birth of a baby that Ed and Al were present for was Hughes’ wife and it resulted in him discovering he could transmute without a circle, rather than Winry delivering a baby to a family in Rush Valley for character development and gaining an Automail apprenticeship.

Izumi is introduced in the same fashion in both versions, as well as Greed (the manga having caught up with itself a bit).

Now comes one of the major differences between the two – the humunculi’s origin. In 2003 when an Alchemist attempts human transmutation, a humunculi is born. I also really like this difference as the characters are forced to deal with their mistake. One thing is is that what if there are more attempts at human transmutation than the allotted seven sins? What then?? And I’ve always wondered what kind of life Gluttony lived before he died as he looks very unhuman. Bradley is still an aging humunculi but his name is Pride instead of Wrath, though. The role of Wrath is given to Izumi’s unborn child in 2003, Sloth is Ed and Al’s mother (which never made sense sin wise since she was never particularly slothful).

In Brotherhood a human transmutation brings back no life at all. The tried and failed transmutation allows the Alchemist to see “The Truth”, but unlike 2003, it is their own personal gate of truth that shows them all the alchemist knowledge… then takes away something from them and gives nothing back. The most heart-breaking scene is when Ed digs up their mother’s grave to know for certain if what they brought back was her or not. Awesomely enough, it’s then that Ed knows for sure it’s impossible to bring back the dead and will press on only to get Al his body back.

Second difference is the main villain. While both being connected to Hohenheim, their motivations are different. Dante was Hohenheim’s lover from centuries ago and they did alchemic research to extend their lives and live forever – the philosopher’s stones. Initially it was to be together forever, but then Hohenheim found Trisha and loved for reals. Not a bad tale, honestly. Makes me wonder if the anime intended for Lyra from way back in the beginning of the series that was an anime only character to become the main villain? Since she jumps bodies for her eternal youth, she could have been anyone.

As for canonly, Father used to be a created creature inside a flask created from Hohenheim’s blood and taught him all he knew. Then told the king how to obtain eternal life and once the transmutation circles were put into place, the entire kingdom died and were fused inside of Hohenheim and Father. Father is the creator of the seven sin humunculi as his quest is to become like God and he revokes the sins from himself to become the perfect being.

I love how in Brotherhood you are led to believe that Hohenheim is the ring-leader of the humunculi (not as heavily implied in the manga) until Ed and Al encounter Father and come to terms that he is not their father. Unbeknownst to Father, while he was making transmutation circles, Hohenheim was spreading souls from the philosopher’s stones from inside him into the earth to counter his plan. Pretty epic if I do say so myself.

Due to the main antagonists having different origins and motivations, the overall feel of the series differ immensely. 2003 is a bit more self-contained by the characters involved, while Brotherhood is more horrible as the world is larger and Father basically has control of the military. The military was pretty corrupted in 2003, but that was a small fraction of warmongers when Brotherhood involved all the higher-ups to carry out Father’s plan as they were promised eternal life for their service. King Bradley was hand-selected by Father to be the Fuhrer and to carry out the military actions to create the transmutation points. Can you say “messed up?” and “AWESOME!”

Thirdly, the Gate’s role. Briefly mentioned above, canonly it is what an Alchemist pays the toll at for their human transmutation. In 2003 it is approached the same way, additionally, if you step through it it leads to our world. Also interesting is the fact that Alchemists in Amestris and the rest of FMA world draw their alchemic powers from the lives of those in our world, rather than from the core of the earth.

Due to 2003 covering everything before Hughes’ death, Brotherhood pretty much rushed through those events to get to the new stuff. It makes sense for those that had watched the previous series since you’d be itching for the new material. But new viewers I find don’t have as much as an emotional attachment to Hughes or Nina.

Clearly the two series have their similarities and differences, but overall are still Fullmetal Alchemist. The similarities that happened later in 2003 that eventually came about in the manga was no coincidence. Hiromu Arakawa did have some say in what happened. By the time 2003 ended, the manga was around 36 chapters, just when the canon human version of Barry the Chopper showed up and #66/Barry had joined forces with the military to take him down. Right after 2003 ended I picked up the manga and read scanalations online right after Hughes’ death. Keeping up with it until its end in 2010 and it was amazing. And yes, I’ve now purchased all the domestic released volumes 🙂 Can you imagine waiting a year to read the conclusion?? When the announcement for Brotherhood came about I got so excited to see some of my favorite scenes from the manga be animated!

Hands down Fullmetal Alchemist is the series I suggest to people that want to watch a really good anime whether they have been watching anime for years or just starting. “Good” doesn’t cover it, honestly.

It has everything in it that I love when I watch any movie or TV series – action, comedy, drama with a side of romance. Combine that with gorgeous music, animation and a great cast (Japanese and English), you bet I’ll watch and love it. What gets me the most about FMA is how deeply gripping and emotional it is. It makes you think what you’d be willing to sacrifice and what would you give up to gain something greater. Both series convey this same message through differing paths.

I love this series so much. Nothing has come close to touching its masterful story and characters, and who knows if there ever will be, in my heart.

If you’d like to see some of my biases, you can head over to my Tumblr and read my answers to the 30 Days of Fullmetal Alchemist meme I participated in. 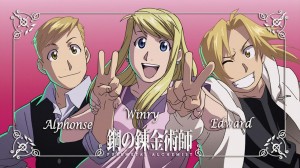