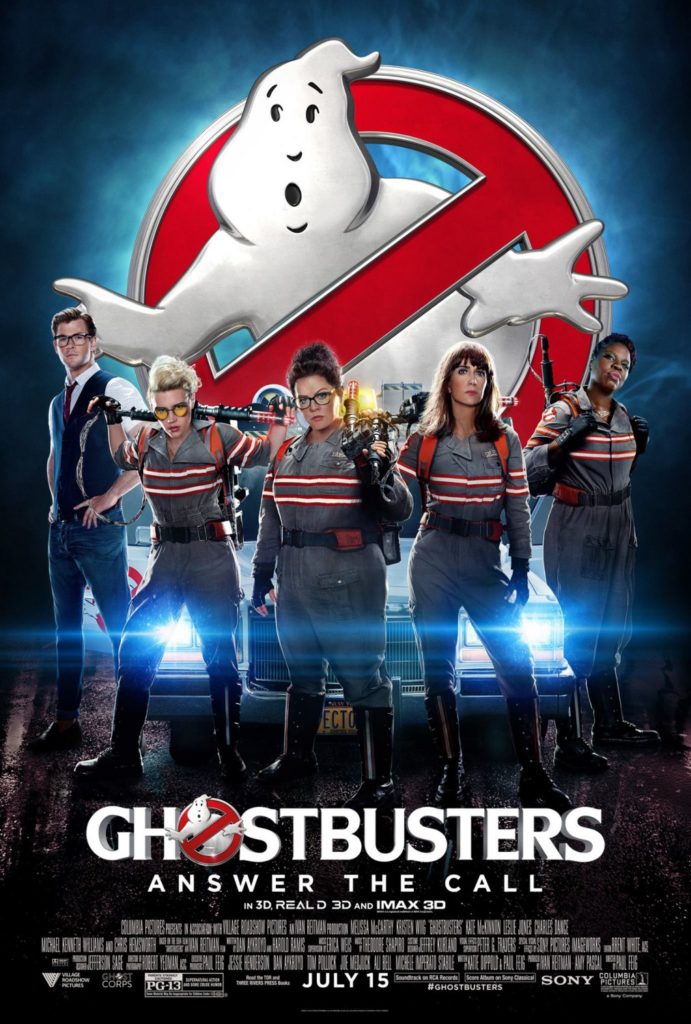 Ghostbusters is a reboot that fortunately it stands on its own. In a summer so packed with remakes/reboots and sequels, it’s a breath of fresh air.

Abby (Kristen Wiig) is a physics professor at Columbia University, successfully distancing herself from her past life of studying the paranormal. One day, she is approached by a man that runs a historic site. She asks how he thought she’d be able to help him, and he shows her a copy of a paranormal book she and her old friend Erin (Melissa McCarthy) wrote together. Furious that that book was republished without her permission, she tracks down her friend at a technical college where she still is doing research on ghosts and the like with the help of an engineering friend, Jillian (Kate McKinnon). Abby agrees to do the investigation at the site if Erin removes the book from publication, thus securing her job at the university.

With equipment in tow, the three arrive at the presumed haunted house and witness an entity. The video they take gets posted online and Abby immediately loses her tenure. Too excited about seeing the proof of her youth, she doesn’t care, and the three of them buy the top level of a Chinese restaurant to start a business of ghost investigating. They hire a male receptionist, Kevin (Chris Hemsworth) who is all looks and no brain.

Meanwhile, an MTA worker witnesses a ghost in the subway and contacts them to come and investigate. The gals come and test the proton laser that Jillian had been developing since their first encounter. They successfully capture it, but their proof is dismissed like the previous. The MTA worker, Patty (Leslie Jones), joins their team, lending her New York knowledge, as well as providing them with a hearse for their transportation.

Despite the success in the increase in ghost activity and able to catch them, the public is divided in skepticism, including a supernatural debunker, Dr. Heiss (Bill Murray). He comes to their facility and demands to see the ghosts with his own eyes. Unable to take being called a liar, Erin releases the recent ghost they caught and it kills the doctor in its escape. In the chaos, the ladies are taken to the mayor where the government admits they are aware of the increasing ghost activities, but with no proper equipment to deal with it. Publicly they declare the Ghostbusters as frauds, but in reality they support their efforts,

The Ghostbusters discover that an apartment custodian named Rowan is planting devices along ley lines which intersect at the Mercado Hotel in Times Square, a site with a history of paranormal activity, to summon a portal to the ghost dimension in the hotel basement. When they find him, rather than be captured, he electrocutes himself in the device and dies. Jillian deactivates the portal. The next morning, Rowan returns as a powerful ghost and possesses Erin and then Kevin.

While possessing Kevin, he opens the portal and releases hundreds of ghosts. The police and DHS attempt to stop Rowan and are outgunned, but the Ghostbusters fight through the army of ghosts to reach the portal. Releasing Kevin from his hold, Rowan transforms into an enormous Ghostbusters mascot and tears apart the city.

Thinking quickly, the team devise a plan to use Ecto-1’s nuclear reactor to reverse the process and close the portal and return the ghosts to their own dimension. The plan succeeds after a scare of almost losing Abby and Erin. Afterwards, the mayor’s office agrees to secretly fund the Ghostbusters’ research while publicly continuing to denounce them as frauds. With new funding, the Ghostbusters are able to move to a better facility—an old fire house.

Ghostbusters had been in talks for a third installment for many years. After the passing of Harold Ramis in 2014, plans for a direct sequel were dismissed and a reboot was formed. However, the remaining cast still had their own cameos. Bill Murray’s cameo as the doctor that later died was too long and brought your out of the moment. Dan Akryoid as a cabbie and Ernie Hudson as Patty’s uncle that owns the funeral home were much more subtle and were fun nods to the franchise. Annie Potts was was a hotel desk clerk and Sigourney Weaver as Jillian’s mentor at the very end. A third movie wouldn’t have worked in the long run, so I’m glad the original cast was able to make cameos and add some chuckles.

While the movie stood on its own, it still paid several homages to the original with the iconic logo, Ecto-1, proton blasters, forming a ragtag team, possession, giant thing wreaking havoc on the city. It didn’t rely on knowing the events of the previous films at all. I wasn’t bothered at all by the all female cast. In fact, I fully embraced it. The world needs more movies like these where a group of women are friends, working together for the same goal and not for the sake of a boyfriend or looking glamorous while doing so. Along with the shift in genders, I’d say the humor was the part that didn’t quite click. Humor has evolved a great deal in 30 years, and this movie lacked one-liners. Not that it wasn’t funny at it, it just wasn’t as witty as the original and relied more on visual queues and subtly.

Don’t believe the initial hate of the first trailer. This movie was a ton of fun. Not great, just like the originals weren’t, but a good time with great visuals (ghosts and Kevin), representation of women in an action film, and a tickle of your nostalgia.