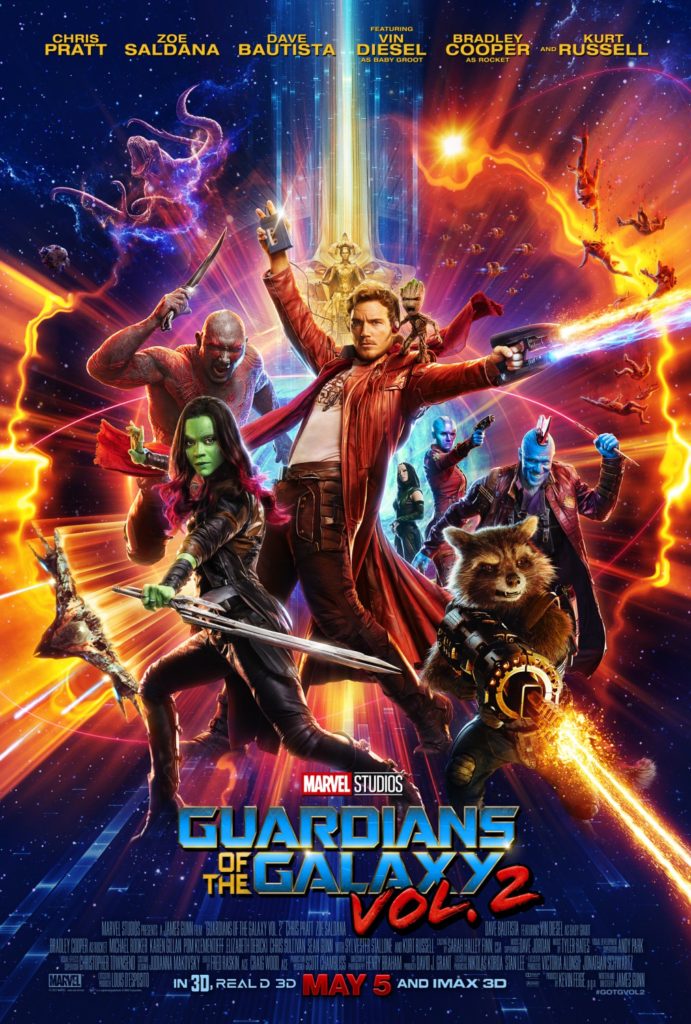 Guardians of the Galaxy Vol. 2 is the first big release to kick off the summer movie season and in the best of ways. Green-lit nearly before its theatrical premier at Comic Con in 2014, and its wild success in reception and box office number, this sequel was well-deserved.

After the events of the Infinity Stone, the ragtag crew becomes known throughout the galaxy. The queen of the Sovereign race hires the guardians to protect a battery from an invading creature in exchange for the release of Nebula, Gamora’s estranged sister whom they’d had in custody from her trying to steal a battery. Unfortunately they don’t make a clean getaway with their mission as Rocket decides to steal a battery for himself. The Sovereign go after them, Peter and Rocket arguing in the cockpit. As their ship is struck, the drones are destroyed by a mysterious ship and they crash land on a nearby planet. Their savior lands after them and introduces himself as Peter’s father, Ego. Peter is skeptical about how he just showed up now of all times, but Gamora convinces him to go with him to his planet. The team splits up, leaving Rocket and Groot to repair the ship and guard Nebula.

Her revenge unmet, the Sovereign hires Yondu to capture the Guardians. Yondu, recently outcast by the Ravager community for child-trafficking, agrees on grounds to regain personal redemption.  Once Yondu’s crew locates the ship on the planet, Rocket ambushes them until he miscalculates and is outnumbered. Nebula comes to his rescue. Yondu shows up with his arrow and incapacitates both of them and announces why he’s after them, but has no intention of turning over Peter. His second in command, Taserface, forms a mutiny along with Nebula and take Rocket, Groot, and Yondu back to the hold in the Ravager ship. One by one, Yondu’s loyalists are ejected from the ship into space while Taserface provokes the prisoners. Yondu and Rocket bond in prison and are able to confiscate the ship thanks to Groot and Kraglin, Yondu’s second in command.

Back on Ego’s plane, Ego explains that he is a Celestial, a god-like being that can create matter from their consciousness. Peter asks him about his mother, and Ego confesses his mother was the first women he ever loved in his quest of searching the universe. Ego had hired Yondu to collect Peter after the death of his mother, but Yondu never did, and Ego has been searching for him ever since.

Out in the courtyard, Ego shows Peter that the power that flows in himself, also flows within him. Peter practices by forming a ball and they play a game of catch like he’d always wanted as a boy.

Nebula enters Ego’s planet’s atmosphere with a ship she commandeered from Yondu’s to attack Gamora. Firing and giving chase, Nebula eventually loses control and crashes the ship in an empty cavern where the sisters find piles of skeletons and rotted corpses. Gamore rushes back to find Peter to tell him what they found and the uneasy feeling she’s had since they arrived.

While practicing their Celestial skills, Ego expands on the reason of his travels. For centuries he planted seeds on thousands of worlds so he can terraform them into new extensions of himself, however, they can only be activated by the combined power of two Celestials. In order for there to be two, he impregnated women of multiple worlds to create another Celestial. He hired Yondu to collect these children, but killed them all when they couldn’t perform matter forming. Against his will, Peter helps him activate the seeds, which begin to consume every world they are planted. Until Ego admits he killed Peter’s mother so she wouldn’t be a distraction to his mission, to which Peter breaks free of his control and fights back with his own power.

Thanks to Mantis, Ego’s innocent servant, the rest of the Guardians, plus Yondu, are brought up to speed and she helps them locate the brain of the planet. The reunited Guardians reach Ego’s brain at the planet’s core, and are greeted with arriving Sovereign drones. Rocket makes a bomb using the stolen batteries and instructs Groot to enter the small crevices to set it.

Peter continues to fight Ego with his newfound Celestial abilities to distract him to allow the other Guardians and Mantis to escape. The bomb explodes at the center, killing Ego and disintegrating the planet, the guardians escaping at the last moment. Yondu sacrifices himself to save Peter, who realized that the reason Yondu kept him was to spare him from the fate of Ego’s other progeny, and that Yondu was Peter’s true “daddy”. The Guardians hold a funeral for Yondu, which several Ravager ships attend, acknowledging Yondu’s sacrifice and accepting him again as a Ravager.

While not as strong as the original, Guardians of the Galaxy Vol. 2 is still packed with wit and fun, stunning visuals, and classic rock soundtrack. A perfect example of continuation of established nuances, style, and characters arcs. Also character redemption, which will be the saddest move death of 2017. What is it with the second films of Marvel franchisees with cool people dying?! Seriously, I cried.

By nature of a film marketed as a comedy, there are a lot of far-fetched moments, but you can’t help but laugh and go with it. The Taserface bit will never get old. David Hasselhoff is a meme and self-aware of it, and it’s amazing. Sylvester Stallone’s bit part? So minimal, but with him, Hasselhoff and Kurt Russell? Such a purposeful powerhouse of older actors in a single movie. Marvel is also getting incredible at that de-aging technology.

Guardians of the Galaxy Vol. 2 didn’t blatantly add anything to the overall arching road to Infinity Wars of Phase 3, but it’s still a solid sequel in its own self-contained universe. If you enjoyed the first, you’ll definitely want to check this one out.