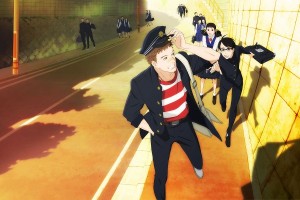 This year has been lacking in ‘new anime that interests me’. Using my method, I think there were only two of them from Spring season that I wanted to check out. One was Kids on the Slope.

Kids on the Slope (坂道のアポロン / Sakamichi no Aporon), is adapted from Yuki Kodama’s 9-volume serialized manga by the same name. A lot like Fullmetal Alchemist: Brotherhood, the manga and the anime finished within a few weeks of each other. Shinichirō Watanabe (Cowboy Bepop) was lined up to be the director, and Yoko Kanno (Escaflowne, Cowboy Bepop) was to compose the music for the series. Yeah. I was interested.

It’s the summer of 1966 and Kaoru Nishimi moves to Kyushu to live with relatives while his father is traveling for work. Kaoru is an extremely introverted honors student and does anything he can to avoid interacting with people. In an attempt to find some peace and quiet, he finds the supposed school bully, Sentaro. Instantly Sentaro befriends Kaoru by way of teasing and nicknames as well as introducing him to jazz. Turns out, Sentaro is not a bully at all – just seen as one because he’s so tall and built – but is a good guy with a heart of gold.

After school they meet at Sentaro’s childhood friend’s father record shop’s basement. There they invite Kaoru to play on the piano. Being unfamiliar with jazz, he stumbles and almost gives up. But after the high energy of Sen and ‘Brother’ Jun, he starts to catch on and their jamming sessions becomes frequent. 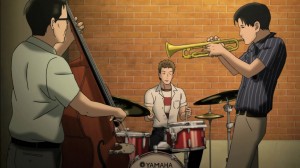 The series is very much a slice-of-life, which isn’t typically my cup of tea. There has to be something in it that needs to make me care – may it be mystical or comedic. In KotS case, it was the music aspect and the art that kept my interest. Every episode I marveled at the wonderful care the animators took to the instruments and the fingers and movements of the musicians. I’m used to anime doing whatever they can to make it so they don’t have to animate fingers playing the piano, or doing much else than moving back and forth. But this series, the fingers reflected what was being played. And aside from the instrument parts, the overall animation is very appealing. Most anime nowadays the colors are bright and modern, but being set in the 60s, the warm hues and normal Japanese colored characters was nice. Almost a real sort of feel to it. I was expecting it, but at the same time not – all I was initially thinking of getting out of it was a music anime with a basic storyline – romance came into the mix, along with other dramas. Then it became very much a stomp on your feels and soon the jazz was a lovely staple.

Sentaro’s childhood friend, Ritsuko is pretty girl and instantly Kaoru crushes on her. But when Sentaro finds Yurika, a beautiful upper classmate, she starts to act strange. At first I thought it was because she thought Kaoru liked Yurika too and felt bad for him, but no… it was because she was in love with Sentaro and got all jelly. To make things more complicated, Ritsuko sees Brother Jun and instantly falls in love (can’t blame her… but I’m biased for Junichi Suwabe sexy voice~). 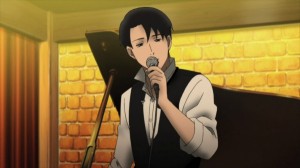 Sentaro is heartbroken when he finds out and doesn’t see Ritsuko as a love interest at all (which I never saw happening anyway, but oh well). She’s distraught and doesn’t know what to do about her feels. Then Kaoru takes the initiative to tell her how he feels about her and kisses her. She’s not happy – slaps him and avoids him for a while. Through his rejection, Kaoru tries to make Sentaro see that she likes him but he’s just not open to it and is hung up on Yurika leaving him for Jun even though they weren’t really together to begin with. Eventually with the passing of time of avoiding and then trying to make amends, Ritsuko begins to like Kaoru. Hurray!

But then tragedy strikes after graduation. Sentaro takes his foster sister with him on a scooter ride and gets in an accident. She suffers a brain trauma and Sentaro disappears. In Kaoru’s attempt to seem like he’s not effected by his best friend leaving, he forces himself on Ritsuko and she freaks out on him and becomes distant. Kaoru then leaves for college and gets a last glance at Ritsuko at the train station.

I was a bit disappointed with the ending. There’s an 8-year time skip and Kaoru is a doctor, and I don’t recall him ever expressing an interest in it previously, so it seemed mildly random. Yurika visits the hospital, now pregnant with Jun’s child, and shows Kaoru a photo of a friend’s wedding and the priest looking remarkably like Sentaro. Kaoru then goes to search for him and finds him in on an island with a church and orphans and they play jazz in the chapel. The series ends with Ritsuko finding them both. I guess I just wanted it to be conclusive with the relationship… but wasn’t. Ah well.
I enjoyed the series. It effectively shows how bad things turn when you assume things and try to force your feelings, romantic relationships and otherwise. Don’t covet the life of others and assume it’s perfect, cause it’s likely they are putting up a front to forget their pasts. You can’t push introverts – you need to let them come out of their shells on their own, otherwise they explode.

If it was longer than the 12 episodes I think I would have started to get bored with it. It’s a sweet and sad series and sometimes you can only take so much of it. So it’s a nice contained story that doesn’t go unnecessarily long like so many other series like it do.

It is now licensed by Sentai Filmworks, date of release is unknown, but you can watch it streaming (subtitled) on Crunchyroll! 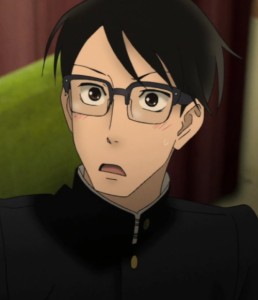