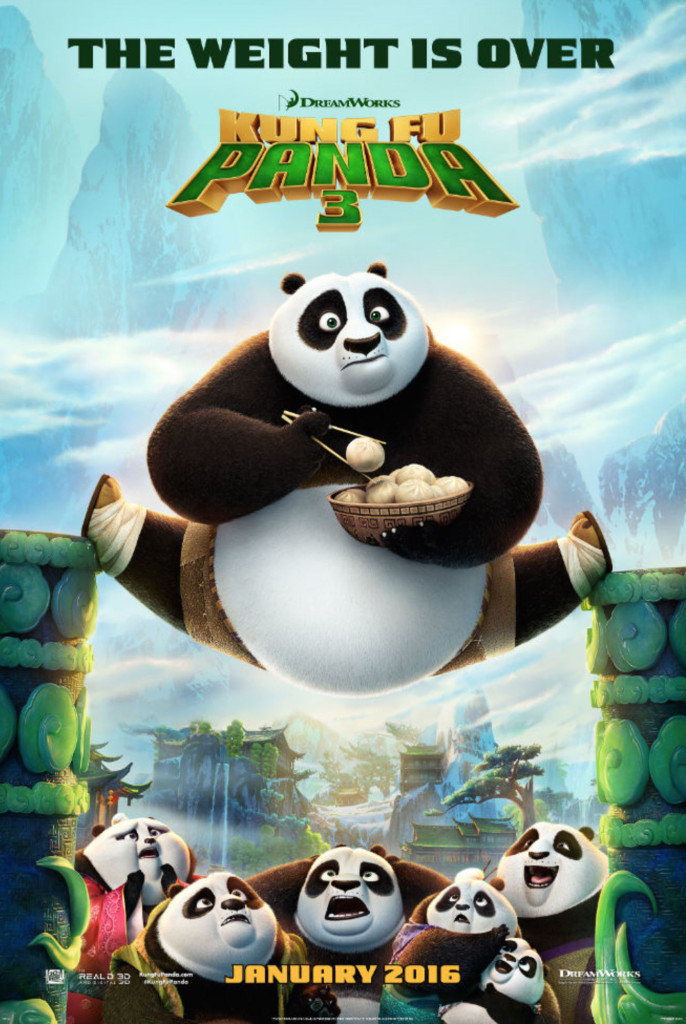 I have a goal this year: I am going to be super serious about reviewing the movies that I see. Technically Zach and I are supposed to split them. So far I’m just going to handle all the animated movies and figure out the rest (cause so far that’s all I’ve seen worth reviewing that isn’t Deadpool so far)

Kung Fu Panda 3 begins where the second film left off – Po has fit into his role of the Dragon Warrior and he along with the The Five protect China, though most of their days is spent heightening their skills or helping out at Po’s dad’s noodle shop. Shi Fu informs Po that he’ll be retiring and passing the role of teacher to him. To prove, or rather, not prove he is not capable of teaching, he tries to instruct the five in a training session and nothing goes well. Shi Fu smiles and tells him he just needs to be himself.

While at the noodle shop one day, another adult panda comes to the village, claiming he lost his son. Po, being a dumb panda (no really) says he lost his dad, too. After the villagers let out an exasperated sigh, it finally clicks with both of them who the other is. They then try to reconcile for lost time.

Soon the village is attacked by jade statues. Shi Fu leads the way to the library to research these techniques. The one responsible for the jade – once living animals – was Master Oogway’s soul brother, Kai. (The joke in the whole movie is that nobody remembers him and it’s great). The scrolls go on to talk about how Oogway learned the way of chi from pandas and Kai grew jealous. Controlled by his emotions, Oogway banished him to the spirit realm. Kai had been using the Chi of those that had passed on to set himself free from the spirit realm. For them to stand any chance against him, Po must learn the art of chi himself. Po’s real father offers to teach him, saying he will teach him the way of panda life and only then could the secrets of chi be unlocked.

Excited to learn long forgotten martial arts and to rebound with his father and be among his kind he had believed was deceased, Po wholeheartedly agrees to the journey (his jealous adopted father in tow). Once they get to the Panda Village, Po quickly learns that the panda life is incredibly simplistic and, well, lazy – exactly what he had to overcome to become the Dragon Warrior of sorts. Several days pass in the village and Po’s father admits he doesn’t know the secret of chi and just wanted his son home to protect him from the threat of Kai.

While Po has been away, Kai has attacked China with his Jade Warriors and has captured members of the Furious Five and follows the trail to the village. Tigress gets ahead of him in enough time to warn Po and to hurriedly step up into the role of the teacher and use his martial arts knowledge with his panda heritage.

The newly trained pandas manage to fend of the Jade Warriors, but Kai is too powerful! Po resorts to his Wuxi finger hold, only to be told that that only works on mortals. Thinking fast, Po uses the Wuxi on himself and they go to the spirit world. They battle, not so elegantly as Po attempts to gather his bearings).  On the mortal plane, friends and family join together in mind and heart and unlock their chi to give Po the power to overload Kai with chi and he is no more. Oogway is freed from the confines he was in and explains that he chose Po as the Dragon Warrior because of his panda decent. He give him his staff and Po returns to the mortal world where he reunites with everyone.

Kung Fu Panda 3 is a beautiful bookend to the trilogy and I really hope it stays that way. Still not as strong as the first installment in the franchise, but it touched on questions throughout and concluded Po’s journey nicely – his destiny and family life and building on the ongoing theme of being yourself and being the best you can. It looks like the television series is still in production, so I’m sure that could keep up with its assorted one-shot adventures together. I’m content leaving things as is. The impact this one left would surely be gone if they continued on.

As always, I love Asian culture and the beauty it brings to this film. While I’m not big on some of the animal designs, the clothes, artifacts and architecture and backgrounds are gorgeous! I admire the martial arts styles and stances utilized as well. It’s so beautiful to watch, you can see the improvements in technology from the first film. Give me the artbook!

I couldn’t help but see the correlation between the pandas and pandas in real life as they roll around and bash their heads against anything in their path. They aren’t very intelligent and likened to hillbillies. It fits so well, I was laughing hard. Pandas are a danger to themselves as they are carnivorous but they choose to eat bamboo!

Please let J.K. Simmons be in all the animated films, kthx. Kate Hudson as the sultry ribbon dancer that tries to seduce Po was also a fun addition to the cast. Bryan Cranston did a really great job as Po’s father as well. It’s all stunt casting as per usual, but I’d like to think they all work out in the end.

By now this film is probably phasing out of first run theaters because of Zootopia (which will be my next review), but if you like the previous films, you’ll definitely enjoy this and are nearly required to view it to get the conclusion to my favorite Dreamworks franchise.