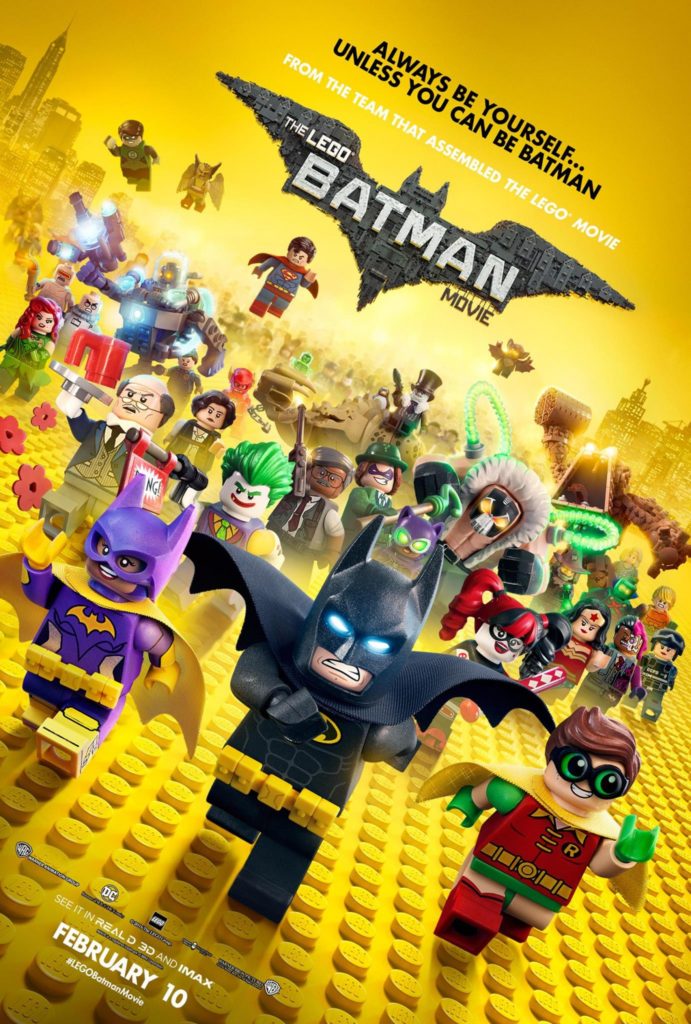 Lego Batman Movie is the much anticipated partial sequel to the acclaimed Lego Movie. With how well-received Will Arnett’s interpretation of Batman was in the film, and with how popular Batman is as a character in general, it was only fitting to give him his own film (as well as including additional Bat-Verse characters).

In Lego Gotham, Batman fights crime with Joker as his biggest threat and arch-rival just as he does in the movies and comics. Although, he refuses to admit that that’s the case, which hurts Joker’s feelings and thus sets his plan (and film plot) into motion.

Batman/Bruce Wayne attends a gala announcing the retirement of Commissioner Gordon and ascension of his daughter Barbara. Barbara explains her plans for the police force to be separate from Batman’s assistance, which doesn’t make batman happy. The Joker crashed the gala with his goons to surrender. Completely suspicious, Barbara locks them away in Arkham while Batman formulates a way to steal Superman’s Phantom Zone projector to get rid of all crime in Gotham forever.

Before departing the Batcave, Alfred reminds Bruce that he adopted a boy at the gala, Dick Grayson. After many moments of regret and begrudging, he realizes he can use Robin to help him get the projector from Superman while hiding behind faux father tactics. They successfully retrieve the device and return to Arkham and send him to the Phantom Zone. Barbara throws them both in prison for being so reckless and takes the device away for storage, only to be apprehended by Harley Quinn, who then steals the projector and frees the Joker and all the villains that have been imprisoned there throughout time.

Barbara agrees to let Batman go to stop the Joker only if he lets she and the police help. Reluctant, he allows it, and teams up with Robin and Alfred as well. They take down several enemies and have several close calls of losing each other, Batman can’t take the chance of losing his teammates like his parents, so he sends them away to face Joker alone. Having the upper hand, Joker wants Batman to admit that he’s his greatest enemy and that he cares about being the one to defeat him. Still unable to do so, Joker zaps him into the Phantom Zone. There, Batman sees how much harm his selfishness has caused and strikes a deal with the keeper of the zone to gather all the escaped villains and return with them.

Returning to Gotham, Batman saves Robin, Alfred, and Barbara and apologizes for his behavior. While deciding on their next course of action, Joker’s past goons offer their services to take him down. A quick rendezvous for supplies and costumes and transforming Barbara into Batgirl, they travel to the city where Joker plans to let off explosives to split the city apart. They clash with the Phantom Zone villains and send many of them back, but are unable to do so in time before the explosion goes off.

In order to save the city, Batman reflects on what he did in the Zone, and admits to Joker that he is his greatest enemy and is the reason continues to fight crime. Forgiving him, the Joker agrees to help Batman literally connect the crumbling city back together by joining together across the gaps with a clench of their abs and a comical “CLICK”.

The city celebrates and Batman prepares his journey back to the Phantom Zone. He reveals to Robin that he is Bruce Wayne and also his dad. The touching departure is halted when the Zone keeper rejects his return, saying he’d learned his lesson and only Bad Guys can reside in the Phantom Zone, anyway. Batman and Barbara allow the Joker and his old group of goons to get a head start recognition for their help.

Lego Batman Movie, on its surface, is a comedy. But upon closer inspection and viewing, a lot like Lego Movie, contains a lot of heart. While self-referential and laden with visual Lego gags, it has excellent messages on reflecting on yourself and making changes, trust, PTSD, and noticing what you can’t handle and asking for help. Yep, Batman learning how to accept help. There are many reasons he has multiple Robins and several supports outside the Batcave throughout movies and comics history, and Lego Batman Movie touched on that so wonderfully.

Alongside Will Arnett, Zach Galifiankis is The Joker, vocals more along the lines of a less viscous Mark Hamil, which makes for taking him too seriously a little difficult. Michael Cera plays an adorable young Dick Grayson which I was not expecting, and throughly enjoyed his voice work. Rosario Dawson as Barbara Gordon/Batgirl was wonderful and I love her. With the star-studded main cast, there were plenty of cameos, including the reprise cameo of Channing Tatum and and Jonah Hill as Superman and Green Lantern. Eddie Izard lent his voice to Lego Voldemort, which was odd considering Ralph Finnes was Alfred! Mariah Carrey, Chris Hardwick, Jemaine Clement, and Conan O’Brien.

Lego Batman Movie used the same visual technology as Lego Movie and perfected it. The humor in these films is what get me the most – how easy it is to be laughing and then suddenly you’re crying. Looking forward to sequels of both properties as well as Ninjago in the fall.

This was the first wide release film of 2017 that we got to, and I couldn’t be happier.