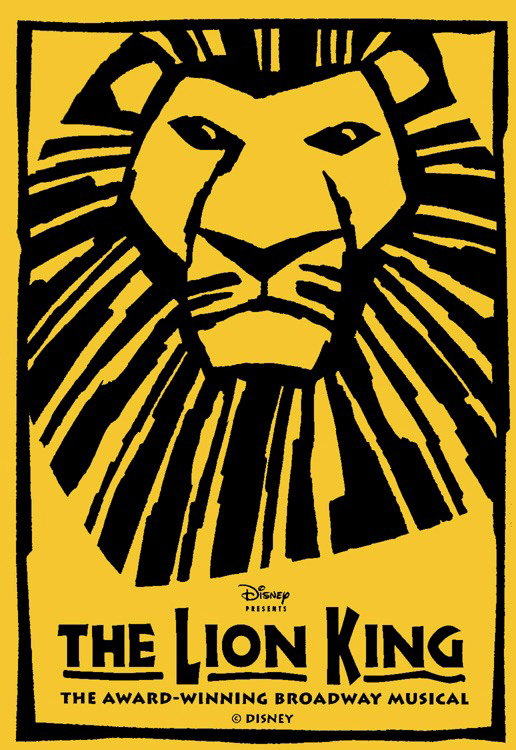 I don’t think I’ve expressed my love for Disney on this blog. I have failed, clearly. Let alone tell you all that The Lion King is my favorite film of all time! Ahhh! Okay, I’m going to rectify this, some.

I remember very distinctly when I was seven years old wanting to see The Lion King. My mother came home from Girls Camp early so we could all go as a family. I was in awe the entire way through. Even as a young girl I could appreciate the artistry of the animation, music and direction.

Then in 1997 a Broadway production premiered. For years it was my dream to see it. I was very close in 2005 as I was in New York, but tickets were expensive and family had no interest in going – so I stood outside the theater and tried to keep my sobbing silent. Then in 2011 it toured to Salt Lake City. I was basically elated. I snagged some cheap seats (if you consider anything less than $100 cheap), and ended up in the last row of the balcony.

I could see more than what it sounds, but I was a little disappointed that my “exclusive offer” I had wasn’t that fantastic. But once Rafiki came on stage and belted out the first lines of Circle of Life, nothing else mattered – I was transfixed the entire time.

Now that I’ve given you some backstory, I bring you to last week. I walked into the box office asking for the cheapest available. Turns out they had third and fourth row farthest left/limited seating. Um, yes, I’ll take those, please!

We get to the venue, Fair Park Music Hall, and I’m fidgety in my seat waiting for things to start. Even though stage right was hidden from us, I much enjoyed these seats more.

The dialogue/plot follows the movie exactly, say for a few additional songs/scenes, of which are fantastic. Shadowland (Nala’s solo song on her way to find help) and Endless Night (Simba crying out to his father) are adapted from Swahili from the Rhythm of the Pridelands CD released back in the day and they are gorgeous. He Lives In You is also taken from the album, as well as inserted into the sequel of Simba’s Pride, and is sung by Mufasa during the scene of young Simba and he stargazing. Completely new songs are Chowdown (sung by the hyenas as they attempt to eat young Simba and Nala) and The Madness of King Scar (sung by Scar and his hyenas as he laments the pressures of ruling the kingdom and what can be done to make him more of one). There is also a song/scene called Morning Report that was animated into the DVD release, yet both times I’ve seen the musical it is omitted and I’m not really sure why.

Both casts I’ve seen have done a phenomenal job. Salt Lake’s young Simba and Mufasa was better, but overall I found Dallas’ production to be stronger. Nearly all the lion cast and Rafiki are of African decent (a lot like the movie) and it makes for some really great authenticity.

While watching, you almost forget that they are people. The costumes are so colorful and elaborate, most human characteristics are gone. Zazu and Timon are both puppets operated by an actor. The hyenas are in fullbody suits and stilts to make their forearms longer. When Scar and Mufasa hunch a bit, their lion heads come over their faces to create the illusion of a menacing predatory lion. Being so close, you’d think the the animal costumes would look silly and more human, but they weren’t.

In the case of the lions, they gave them weapons when ready for battle like African tribesmen and I found that to be a cool representation. Another change I find fitting is Rafiki’s gender – in Africa, a shaman/sage like Rafiki is more likely to be a woman in their culture. It doesn’t change anything story wise, but I find it a cool way to even out the gender of the cast as well. Not to mention I find the character far more entertaining.

Other changes that stand out, are the addition of a scene of Timon nearly drowning in a river and Simba freezing in his post-traumatic stress state to save him. Obviously Timon lives, but it does give you more of a sense of the guilt and shame he feels (same with Endless Night). In the Madness of King Scar, he attempts to seduce Nala to be his queen so he could have heirs, and this is where the Lion King fandom came up with Vitani from the sequel being their child since she doesn’t bear much resemblance to Zira.

Whether you are in love with the animated film or not, I believe the musical would be stunning to anybody. If you are a fan, you’ll eat it all up. I haven’t been to a ton of musicals just because that’s not what I grew up with, but I’m in love with this one in particular. It strikes me with nostalgia, as well as a since of new age wonder. I highly recommend it.