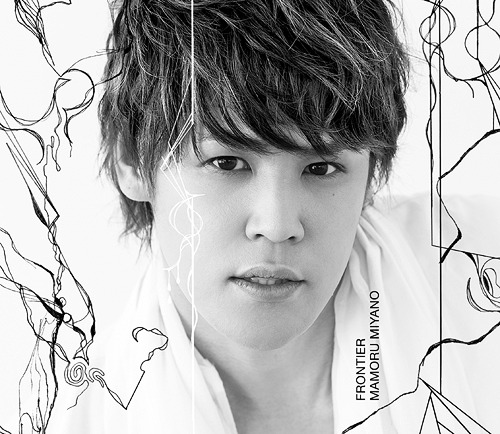 It has been two years since PASSAGE and here we are at Mamo’s milestone of his 5th album, FRONTIER! The album debuted at #3 on the Oricon charts!

Since the successful collaboration with EastWest Studios in Los Angeles, Miyano Mamoru returned to work on select tracks and the music video for the titular song. Many of the tracks definitely have a West Coast electronic vibe (mainly TRUST ME and DON’T STOP and the remix of “Magic”). Then there’s the staple ballads of “Can’t Ever Let You Go” and “Tada, Soba ni Ite”. And then there’s the This Sounds like It Can be in an Anime, “Fight For Love” and, slightly, “Evolve”. “Naked Tango” is a great tune for, well, tangoing, and being a bit of a different sound than the rest. “FRONTIER” is a great tone-down from recent singles and is a soft pop earworm.

For me, “Evolve”, “Tada, Soba ni Ite” and “FRONTIER” received the gold stars. “Evolve” has this great driving rhythm and neat synthetic orchestration and lovely English lyrics that are easy to pick up and even if you don’t look up the translations, you can feel the message. And on the opposite spectrum of grand orchestration, “Tada, Soba ni Ite” is 90% Mamo and piano, and anyone who knows me knows that’s my ultimate aesthetic. It had me tearing up with the first listen for how beautiful it was. My friend’s translation did not help the feels.

Included with the 8 new tracks, are “NEW ORDER”, “BREAK IT!” and “Shine”! from previous singles and all of which are anime themes and are A+. Crazy!

As an entire package, it’s a good album, though I’d say PASSAGE was stronger for me.

Please support Miyano Mamoru aka Mamo by purchasing the album. I usually go through CDJapan. As a person living in the US the shipping is fair, and frequent shopper points accumulate to help on future purchases!