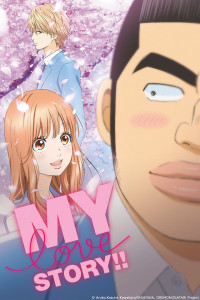 Every once in awhile I like to find something cute to watch – simple, light, and easy on plot (Probably why I ended up loving Free! and Silver Spoon so much, of recent). I’d heard of My Love Story/Ore Monogatari!! from a few people that have kept up with the manga for years, but never got around to it. Then this year during the spring season, it got an anime adaption. I didn’t jump on it then because I was already watching other shows that were airing, but made a point to keep it on my list for later. This review is still late in the making, even as I was late in starting to watch it.

Gouda Takeo doesn’t have luck with women due to his physique resembling a bit of a gorilla and is gullible to a fault. Any girl that does get close to him, however, ends up falling for his handsome best friend. One day he saves a girl from a molester on the train home from school. She think him for his kindness and insists she makes it up to him by baking him some cake. At first, Takeo believes Yamato’s eagerness to spend time with him is to get closer to his best friend, Suna, as that what has happened in the past. But, thanks to Suna, the misunderstanding is cleared up and Yamato in fact is falling in love with Takeo and series becomes their love story.

It’s a rom-com without the hard to get and breakup/reunion cycle. I honestly was scared that most of the series was going to be frustrating because Takeo wasn’t seeing that Yamato was interested in him, but it was only a few episodes and it settled into place. A lot of the humor comes from Suna, the straight man of the series whose expressions and phrases seem to mirror the viewer in several situations. Not exactly fourth wall breaking, but enough that you can emphasis with his plight of having to be surrounded by the pure lovebirds.

These lovebirds are incredibly dense, innocent, and completely lost in the world they made for themselves. It’s sweet and tender, you can’t help but gush over how cute they are despite them never doing more than kiss a few times and calling each other by first names. Takeo often says “I love her!” in his head when Yamato does something particularly endearing.

Not only is it an adorable love story, I also found the series to be a good friendship story. Suna attracts every girl’s attention, and he’s aware of why so many had stuck around Takeo in the past. When asked why he never agreed to date any of those girls, he explained he didn’t like anyone that would treat his friend’s so poorly. Suna is always there to give poor Takeo advice on schooling and in the budding relationship with Yamato. They’d been friends since childhood and remain so through high school and I love how Suna sticks up for Takeo even when he’s being an idiot. He’s an amazing wingman. I need more animes with these types of relationships.

The art is bright and happy. The music is sweet. Opening and endings being very memorable.

My Love Story!! is 24 episodes of two people dating and figuring out how to do so. There’s so much love, it requires two exclamation points!! They encourage each other in their futures. They love each other unconditionally. If you like sappy shoujo animes and can handle two nerds being dense, give this series a shot. I regret not watching it while it aired, cause I think I would have enjoyed having a weekly dose of self-indulgent cute.

You can watch the entire series on Crunchyroll. Sentai has the home video rights and will be releasing a dub sometime soon.