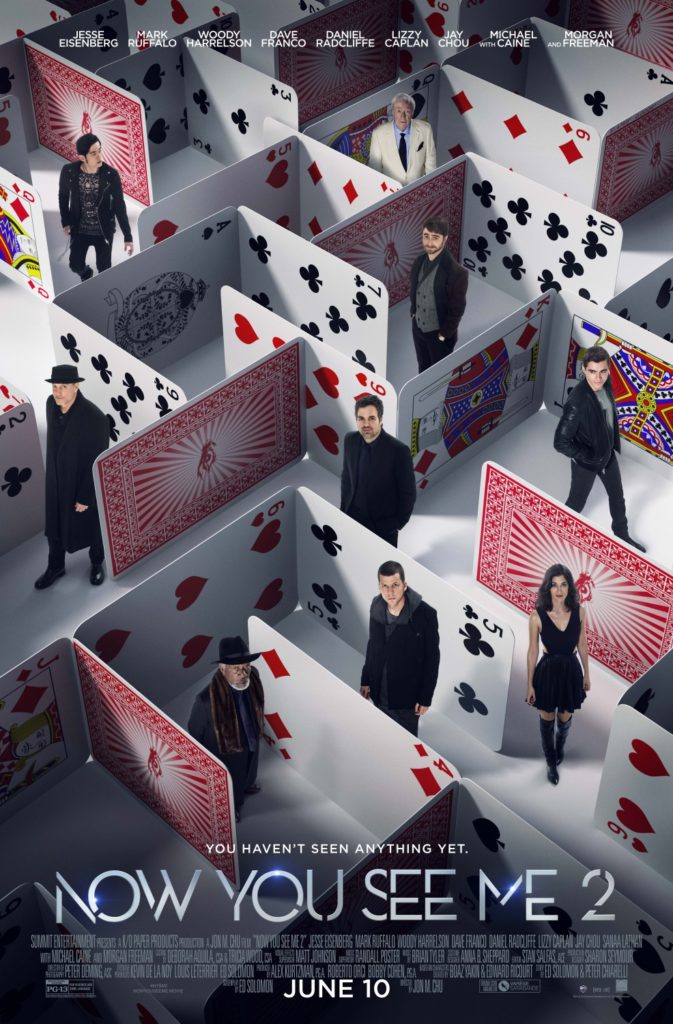 Now You See Me 2 takes place a year after The Four Horsemen have outsmarted the FBI from the first film, they have gone into hiding. Work is slow for them as they wait instructions from Rhodes via The Eye, and the waiting it what drives Henley away and there are only three horsemen left. Restless and wanting to take matters into his own hands, Danny seeks out The Eye on his own only to receive riddles and vague answers. He returns to his apartment one day to find a woman on his couch. He tries to get rid of her, but she too is a magician and outsmarts him. She is then introduced as the new Fourth Horsemen by Rhodes along with a new assignment: To hijack the launch party of Owen Case, a corrupt businessman, software that steals users data for his own benefit.

They begin their act and it is soon overtaken by someone else that exposes Wilder as being alive and Rhodes as a mole within the FBI. All havoc breaks lose! Rhodes gets hauled away by the police, but manages to slip away with his own magic and tries to regroup The Horseman only to find them vanished.

Th Horsemen wake up in Macau, having been kidnapped by Merrit’s twin brother Chase (also played by Woody Harrelson). Chase brings them to his boss Walter Mabry (Daniel Radcliffe). Mabry used to be business partners with Case until Case stole Mabry’s company. Humiliated, Mabry staged his own death and has been in hiding, developing tech in the shadows. Mabry threatens The Four Horsemen to steal his own tech back for him from a casino. Danny is the one that complies and the other three go along with it, begrudgingly. They go to a magic show where they meet Li and he hooks them up with the equipment to pull of their next heist.

Meanwhile, back in The States, now a fugitive, Rhodes breaks Thaddeus out of prison to enlist his help in finding who hacked into the presentation and kidnapped The Horsemen despite him being the one that put him there in the first place. The pair also go to the magic shop in Macau and there it’s revealed that Rhodes’ father commissioned the safe that he drowned in when Rhodes was a child in a failed magic trick. While Rhodes is distracted, Thaddeus disappears.

The Horseman infiltrate the casino easily and obtain the data chip and escape. Danny takes the chip and heads to where he believes The Eye will meet him. Instead he comes face to face with Mabry who reveals he is the one that has been speaking to Danny the entire time. Rhodes shows up in the nick of time and the two put on a show to evade giving the real data chip to Mabry. Rhode’s is taken by Mabry’s men while Danny escapes with the real chip, to a yacht where Tressler is waiting. Mabry is revealed to be Tressler’s illegitimate son and apparently had been acting on behalf of his father. Tressler than exposes Thaddeus as an associate of his. Before Rhodes can do much retaliating, he is placed in a replica of the safe that killed his father years ago. Unlike his father, Rhodes is able to escape and break the surface to be rescued by The Horseman as the yacht speeds off.

Thinking fast, Rhodes and the Horsemen return to the magic shop to get equipment to expose Tressler and Mabry to the public. Li and his grandmother confess to being members of The Eye. With their help, they devise a plan to lure out the father in son. On the internet, they announce they will be performing in London on New Years Eve at midnight.

After a series of separate performances of the four members, Tressler and Mabry detect their pattern and ambush them at their drop off. Mabry takes what he believes to be the data chip from them and commands his goons to throw them off the plane. Moments later, they are knocking on the window – They had fallen for their magic trick. Wall collapse, wind and rain machines shut off and the father and son are revealed to the world to be alive and are taken in for the crimes. Rhodes entrusts the real data chip with what was his newest partner of the FBI with the chip and she lets them escape, realizing they are not criminals.

The film ends with them following Li to an observatory in Greenwhich where Thaddeus confesses to being a high-up in The Eye and best friend to Rhodes’ father.

As per usual, the sequels are rarely better than the first and this one is no different. I still enjoyed myself.

The addition of Lizzy Caplan was amazing. She added such a fun charm and humor to film, such a contrast to the men in the film that are dull. Well, Merritt, excluding. Speaking of Merritt, I’m impressed by Woody Harrelson and how he played his twin. I know the camera work that goes into creating the double, but how he spoke and held himself and everything was fantastic! I like how Daneil Radcliffe has managed to keep getting different roles and how he’s not type-cast. Yet.

There were a few predictable things in this film, namely Mabry being Tressler’s son (or at least involved with him, somehow), Thaddeus being part of The Eye, and Danny being tricked by Mabry. What I wanted to happen and didn’t, was Rhodes father actually being alive and being the head of The Eye or something. That would have been rad! Instead it ended super ambiguous with a pan down of a staircase.

Now You See Me 2 still offers an array of magic tricks and visuals that still make you question how in the world they did that or if magic is even real! Still don’t care for Jesse Eissenberg as he plays the same jerk type character, so at least that is also a constant in this film.

If you enjoyed the first film, you’ll still like this one. It lacks a lot of the twists and turns the first one made, which makes it less exciting, but a nice addition to the universe.