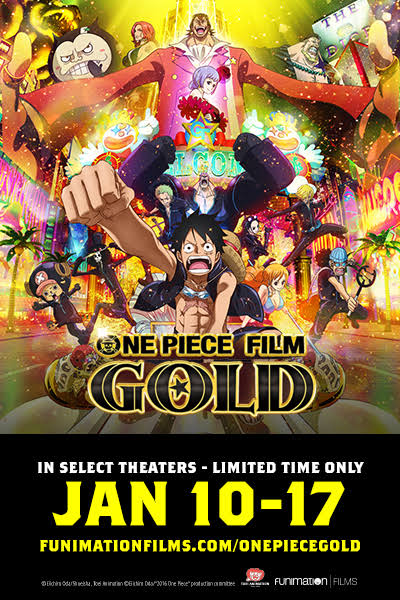 One Piece Film: Gold is the 13th film in the One Piece franchise, release in Japan of July last year and making its limited US & Canada theatrical debut early 2017. We had the pleasure of getting to see it at out preferred theater, Alamo Drafthouse, for its opening night with the Funimation crew, and it was a lot of fun!

Set at an undetermined place in the timeline, Gold has the Straw Hat Crew setting sail for a place called Gran Tesoro – a city inspired by Las Vegas and made of gold. After fending off rogue pirates at the port, the Straw Hats are given a VIP tour of the city and stay. They are then escorted to the main casino where they win and make a lot of money. Feeling lucky, they go up to the VIP lounge to try their hand at becoming billionaires in a game of dice. Unfortunately their luck runs out as their escort, cohort of the man in charge of the Gran Tesoro, has a Devil Fruit power that gives and takes luck at will. The wine and dine had been a trick to double their winnings at the casino. Unable to pay, the Straw Hats fight for their escape, only for Zoro to be taken hostage and encased in gold by Tesoro’s – you guessed it – gold devil fruit powers. Tesoro says he’ll release their friend if they bring him the money by midnight tomorrow, if not, he’ll be executed.

Upon leaving the casino, the crew is approached by Carina, a former shipmate of Nami’s now working for Tesoro. She too wishes to be be free from him and offers to help them repay their debt by stealing from Tesoro’s vault. While forming their plan of attack, they find out that Tesoro holds 20% of the worlds wealth and all the working force on the island are people that were conned into paying a debt. They vow to take all of the money in order to liberate all the inhabitants of the island.

They form an elaborate break-in plan, splitting the crew up into two teams – outside dismantling security and inside with disguises for distraction to retrieve the key to the vault the following night. As most heists go with Luffy involved, they get caught. Luffy and Franky fall through a trap door in the key room, while Nami, Carina, and the rest of the crew are taken to the Tesoro arena where Zoro is being prepped for execution. Carina laughs and reveals that she had been leading them there from the start and they are then bound and taken by Zoro in gold cuffs and the room Luffy and Franky are in, floods.

Soon that flooded water spouts from the piping instead of the gold dust that filters the air for Tesoro’s easy control of the citizens. Turns out, Carina hadn’t betrayed them, and finding the water chamber had been part of the plan all along. Devil fruit powers useless, Tesoro retreats while the straw hates break each other out fro m the melting gold and are about to make their their escape when the surrounding buildings explode. The water runs its course from the pipes and the debris and gold lava overpower the water and Tesoro is able to form a giant gold golem. The Straw Hats fight Tesoro’s lackeys while Luffy goes into Fourth Gear to fight Tesoro.

The battle catches the eye of a passing Marine fleet and it makes its way towards shore to investigate.

One by one, the lackeys are defeated and Luffy is able to overpower Tesoro and send him flying towards the Marine fleet to be arrested.

The film ends with Carina taking control of Gran Tesoro and the Straw Hats fleeing from the Marine fleet.

One Piece Film: Gold is a fun addition to the franchise. A stand-alone movie that feels like a long, high-budgeted episode. Beautiful and refined animation with CGI enhancements in detailing and movement. One Piece has always been great with its action scenes, and this movie was no exception. The English adaption in particular was a joy as it features several of my favorites and a mixture of Texas regulars and LA talent. Even though I’m still incredibly behind in both the anime and manga, knowledge isn’t completely needed to enjoy this installment. Comedic and full of feels. Recommended for any new or long-time fan.

You can buy the home video release in early May!