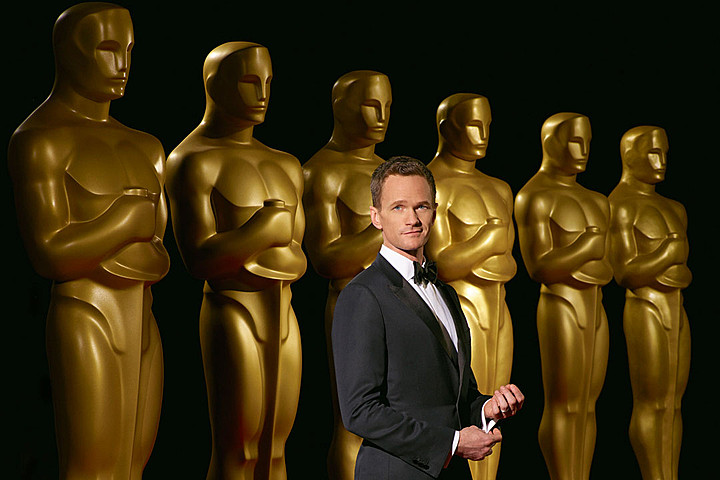 I dunno what it is, but the last few years the Oscars have failed to entertain me for the full 3-4 hour duration of the broadcast. I realize it has never been all that entertaining all throughout, but at least a decent host would be nice.

Neil Patrick Harris is fine, and maybe it would have  been better if he did more musical numbers as that’s what I appreciate him more for. His jokes were dry and overdone. There was a gimmick of his supposed Oscar predictions that were locked inside a box on stage left and attention kept being brought to it. We were lead to believe it held his winner predictions, but all that happened was a breakdown of basically the acts he put on the entire night with some unavoidable instances. Lamest running joke of the night. The racist jokes from all that presented wasn’t all that appreciated either.

Here’s the opening sequence. Much love to Anna Kendrick and Jack Black here as well.

With so many stars passing this last year I thought the In Memoriam bit would be a bit more grand. The portraits were really pretty and the musical number by Jennifer Hudson was as well. I dunno, just expected a bit more. Though a quote by Robin Williams was mentioned at the presenting of Best Supporting Actor.

Lots of speeches were given, some rushed, some more political than needed and some very much needed.

The best thing to ever happen this year, and probably of the last years of recent memory, was Sara & Tegan with Lonely Island singing Everything is AWESOME!! with Will Arnett in Val Kilmer’s Batman suit adding his theme song from the film, the handing out of lego oscars. Still very upset The Lego Movie did not receive an animated film nomination. It also, unfortunately, lost the award to “Glory” from Selma.

Speaking of, I’m please Big Hero 6 won. It was very well deserved and the love and care that went into it true shows. I’m disappointed Book of Life received no recognition either. Although it was nominated at the Golden Globes, of which How to Train Your Dragon won there.

Another note-worthy musical number is that of Lady Gaga’s Sound of Music Tribute. Um, so, I don’t really care for her music, but I probably would if she released music like this. Julie Andrews coming out at the end was also super cute.

The big Winners, you ask?

Best Actor: Eddie Redmayne – The Theory of Everything

Lost of love went to The Grand Budapest Hotel and it became the film out of the whole night I became interested in. And Birdman.

And that’s a wrap for this fairly boring presentation. Did any of you have a favorite moment?