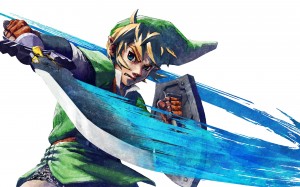 Since I wasn’t part of the site at the time and it was released a year ago tomorrow, Imma blog about how wonderful of a game Skyward Sword is.

As mentioned in my E3 post, I’m a fairly casual gamer. I have a few titles/series that I love and it usually takes me longer to complete a game as I play in intervals in between my normal life. But nothing gets me more excited than playing a new Zelda game!

I grew up watching my older brother play Link to the Past on SNES back in the day, but was too scared to play it myself, but if I ever get my hand on the DS version, I remember enough that I can beat it now. I played a bit of the original as well, but neither me or my bro could beat it, cause let’s face it – original NES was hard! I heard about the amazingness of Ocarina of Time and Majora’s mask from lots of people, but I was never able to get my hands on the games for the N64 when they came out originally. It wasn’t until the Gamecube released and came out with a disc that had both games on them that I played what most gamers consider amazing.

Maybe if I played them at the time of their release I would have found them more fantastic. Great games, sure, but I found myself enjoying Twilight Princess more. Ocarina of Time was great for classic sake and finally getting to play that story made me feel empowered in a way – the world was large, the gameplay was fun and engaging. Majora’s Mask… that game made me rage on so many levels. I really need to go back and play it again, cause all I remember is being frustrated often and having fun trying on all the masks and some favorite areas.

Twilight Princess holds a special place in my heart for the fact that it was THE Zelda game I was anticipating along with everyone else. Finally I could play with the rest of the world and know what people were talking about! I bought the game guide and immediately dove into the game and devoured it in around 60 hours (of which was the estimated time of completion). To this day, I’ve played TP 4 complete times and shaved my play time to around 23 hours.

Five years later, Skyward Sword was released on a new platform, and it was worth the wait! Many were skeptical with the revealed graphics being more cartoony, almost Wind Waker, and not more realistic and gritty like Twilight Princess (yeah, I was one of those people… it was a beautiful game, okay!?) But after playing it… I grew to love it – charming, fluffy and surprisingly expressive! Then there were the people that were turned off by a motions Zelda game since the Wii version of Twilight Princess did not convert well, as was the case with other early Wii games.

Fortunately for Skyward Sword, the Wii MotionPlus made that game FUN. Not to say the story wasn’t wonderful on its own, but swinging your Wiimote like a sword and drawing back like a bow, and steering your bug to grab objects from afar is a wonderful experience. So when I hear people not want to play SS because of the motion I frown and try to convince them. It certainly took some getting used to, especially for me since I didn’t/still don’t own a Wii, but once you get passed that, you can’t imagine the game play being any other way. Two items I wished could be improved on is the harp and tarp, however. Overall, I found the motions to work very smoothly and react to your motions accurate.

New additional functions like Beacons and Dousing was immensely helpful for someone like me that constantly gets easts and wests mixed up in games. Although, knowing which direction to go and where items were made the game less difficult. But when you consider how large the game is…

This was the first game to use orchestrated background music and oh man did I get teary eyed over this. Zelda has always had beautiful music and FINALLY having it be orchestrated instead of midi was amazing. I don’t think I muted my TV at all to listen to other music while playing. I’d kill for an orchestrated arrangement of Twilight Princess *9*

As always, the characters communicate in gasps and grunts. This is one thing I hope never changes – it would make future Zelda games seem out of place. Same goes for Link speaking – he’s left mute because he is supposed to be you the player. Although, Skyward Sword Gives you more options in your responding to the NPC and most times makes for hilarious outcomes. While the main storyline is not changed, there are several mini-quests that depending on your answers, there are different results.

The dungeons are challenging, but I found the bosses to be fairly easy. I remember dying more in other games. The designs of the dungeons were all very unique. Unlike other Zelda games, it lacked a proper Water Temple, much to the relief of Zelda gamers! But there was your Forest and Fire Temple/Dungeons. Campy Ghirahim was a little pill to beat and I found him more difficult than the main villain! But I found Demise’s domain to be the coolest playing field. Out of the dungeons, Ancient Cistern and Sandship were my favorite. While the Silent Realms freaked the ever living crap out of me, the concept was amazing and probably the coolest quest. The area that made me rage the most and makes me wish I could find a cheat to skip it all together when I replay it is freaking Lanayru Mines!

New races like the Mogmas are super adorable, but made me miss the Gorons. The Kikwis are super cute, too. New characters like fellow Skyloftians such as Groose and his gang and the academy’s professor are super cool and make you feel like you’re apart of a civilization and you care for them.

Being the official start of the Zelda timeline (thus far) it successfully conveys this in an astounding way. It lead me to ponder theories of how all the games connect and how changes in the land occurred and and and the lineage! The origin of the Master Sword is heart-wrenching. Speaking of which, this game had me sobbing at particular parts. I’m not going to spoil anything for you peeps, because that takes away the emotional attachment you’d have with this game.

I can’t recommend Skyward Sword enough. If you have a Wii, buy this game. If you don’t have a Wii get one to play this game. Or wait for the WiiU assuming it’s backwards compatible. The playing experience was wonderful and I enjoyed every, though sometimes frustrating, minute of it.

To close, have some Sky!Link. He’s such a cutie. 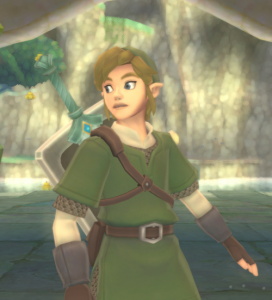 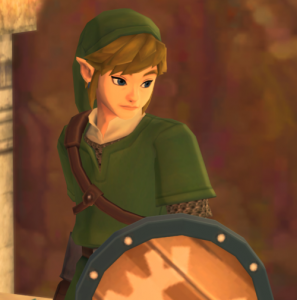 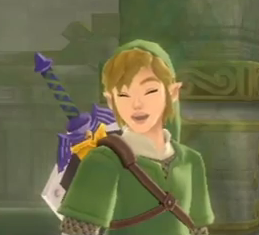 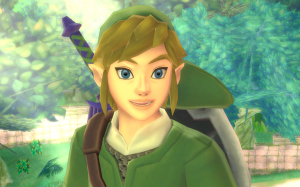