It’s rare for me to see a movie in the theater that it’s so painful I wanted to leave several times. For this particular movie, I hoped that something would happen and it’d get better. It didn’t.

Snow White and the Huntsman was dull, bland, forgetful, over-acted and non-redeemable by Chris Hemsworth’s presence. Granted, I, nor Zach, were expecting it to be a Fantastic Film, passable and decent at least, but not the boring thing we got.

Charlize Theron was an excellently wicked queen, but the relationship with her Awful Haircut brother was downright creepy. Her magic was never really explained either. There’s some films that never do, but this one just didn’t make sense – Why was she bathing in milk/plaster and why was it draining from her bath and into the streets of the city and the poor citizens are grabbing at it like gold? Why do soldiers and random objects shatter into iron shards? And how come some women seemingly die when she takes their youth while others are just shriveled?

Good news is is that Kristen Stewart hardly spoke. Bad news was that we still had to look at her and deal with her convenient Special Snowflake Plot Device. And the constant reminder that she far fairer than the queen! Gag. Correct me if I’m wrong, but didn’t the first five minutes that held the plot show us that Snow White was special and the fairest at a young age? Why did the queen waste her time keeping her locked in a tower for years than just kill her? Oh, cause we wouldn’t have a movie.

I think I would have bought into the whole Snow White being the purest and able to heal and free all people if she were played by someone else. I can’t take Kstew seriously. She just tries too hard at looking sexy and just looks like she’s modeling for Facebook pictures. And poorly at it. 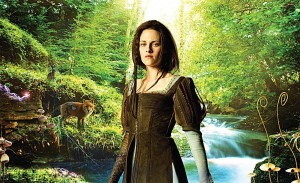 Chris Hemsworth was Scottish for some reason. There was a lot of potential for his character. He started out all broodish and dark and then just decides to help Snow White… and then is the one to kiss her to break the spell even though there was no romantic development at all! Yep, he was just the token pretty face to end up with the supposed pretty face.

Oh hey, Sam Claflin was in this.

The Dwarves, although were not real dwarves/little people (just looked like the pasted actors heads onto little little people), were probably the best part of the movie. Bob Hoskins <3! The Fairy Forest was also pretty.

The costuming and sets were pretty, but nothing ground-breaking stunning or original. This movie was made to fit into the dark and gritty fairy tale category and it tried. Oh man did it try.

I enjoyed Mirror, Mirror vast amounts more and that was made to be ridiculous and silly and I was far more entertained. Snow White and the Huntsman wanted to be serious and epic and it failed because there were so many problems. It was all so poorly executed that Zach and I groaned that there was still an hour left of it. And groaned again when there was still twenty minutes. The plot was lost after about ten minutes. Or maybe I just stopped caring after that point because I was so bored and wanted it to end. I’m baffled that this is getting a sequel. Oh wait, no I’m not – it’s because of the drama with the whole affair between the director and Kstew.

I do not recommend this movie. Don’t waste your time seeing it. Maybe Redbox it for kicks. Wait, even then, don’t do it.