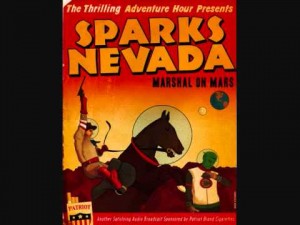 If you’re a long-time fan of the show, you’ll know that Zach is a huge fan of The Thrilling Adventure Hour podcast. For those recently joining us, now you know. And because he loves it, he loves to share it for others. And because we are dating, it was fairly unavoidable to be exposed to it.

Through the various segments I’ve listened to, my favorite happens to be Sparks Nevada: Marshal on Mars. It also happens to be its seventh year anniversary of the radio shows inception. And that’s just what I’d like to blog about today.

Now, I’ve never been much for westerns or had a thing for cowboys despite being surrounded by them. However, I can’t resist Sparks. With the show being a podcast and you get minimal pictures and they aren’t always exactly in costume, I only have Marc Evan Jackson’s cowboy drawl to paint a picture of the Earth-born marshal in my mind. And it’s a fiiiiine one.

My love of Sparks aside, the series follows Sparks and his adventures of defending Mars against nasty varmints, with his trusty martian companion, Croach the tracker who is under ‘onus’ (a pact) to him, at his side. With occasional assistance by the lovely Red Plains Rider and Cactoid Jim.

Episodes are generally episodic, but are more enjoyed listening in order. Currently Sparks has lost his marshal rank as well as his faithful partner via onus, and now travels with the Barkeep from the space saloon as he travels to regain his position and dignity and running into trouble along the way.

What I love most is how witty the writing is and how well the cast work together. The banter between Sparks and Croach. The chemistry between Spark and the Red Plains Rider and/or Rebecca Rose Rushmore. The hilarious reoccurring of passed jokes including certain characters.

Seriously, give it a listen. You won’t regret it!