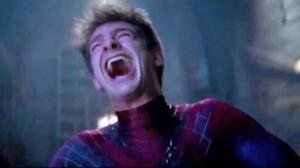 I did not like ASM2. It was watchable, but very groan-worthy. I wasn’t as bored with it as I was Man of Steel, but it was getting very close to that territory. What I hoped would be rectified – plotholes, the dropped plot revealed in the trailers, Spider-Man acting like Spider-Man/Peter Parker not being a hipster, general awfulness – took a turn for the worse in some new ways and ruined any kind of heart the first one had.

Andrew Garfield’s Spider-Man persona improved immensely, and honestly that’s probably the most positive thing I can say about this film. He made some actual jokes and quips to his foes and some cheesy one-liners. However, Peter Parker is still this unintelligent stuttering plagiarizing lying jerk.

While we do get some answers about his parents, the exposition to Peter is given in all of two sentences. And it didn’t really seem all that big of a deal for him to know in the first place. At least be told when he’s old enough to understand at least. The decently intense opening sequence of his parent’s struggle in the jet before they meet their demise lost a lot of its meaning when it was for the sake of a video upload. Really? No like pivotal research?

The first movie had a decent relationship with Gwen Stacey and Peter. This movie their relationship was off and on, for reasons that weren’t just him being Spider-Man and that kind of bothered. Their interaction I didn’t find as endearing as the first one, either. It was awkward and clunky and kind of painful to listen to/watch. However, Gwen did meet her demise in canonly fashion… about the only canon thing this train wreck had.

We get Harry Osborn in this movie like an afterthought. Like, “Oh, I guess they are supposed to be best friends!” They TELL us they are besties, but we never see it as such. For best friends, Peter sure had no problems mentioning he had a BFF away at some fancy private school. There’s a scene for all of ten minutes and then Harry decides that because his friend doesn’t want to help him get in contact with Spider-Man, he hates him. Eventually Peter does show up as Spidey to Harry, only to tell him he’s not going to let him have his blood, which could possibly kill him faster than save him.

Speaking of weird makes-no-sense hate of Spider-Man trains… We have Electro. He’s a socially awkward chap, nice guy, is saved by Spidey and begins to obsess over him. He acquires his powers from falling in a tank of eels hooked up to the city’s power. (Yeah… whatever). He staggers and tries to plead for the police’s help, saying he’s not sure what’s happening. Then he sees himself on the screens in Times Square and I guess has this epiphany of how awesome it is to stand out? Spider-Man shows up to see what the police are starring/shooting at and tries to calm Electro down. And then Electro gets pissed off because Spider-Man took his moment of glory and being noticed away? … ?

I get that everyone is entitled to their opinion and have their own tastes. And as a movie lover and reviewer I have my own, and I am fine if you enjoyed this movie for what it was. Even those that may think this new trilogy is better than Raimi’s – fine. What I don’t like are people defending this movie by telling those that have issues that they “are over-thinking it. It’s just a comic book movie – get over it!”

No. I don’t want to get over it. Being a comic book movie does not justify for lazy writing, inconsistencies, poor characterizations, plotholes, disregard to the source and the like. 10-15 years ago I maybe could have accepted that reason, although Teenage Mutant Ninja Turtles is the earliest successful/good comic-to-film I can think of and I will defend that to my grave (cast/accuracy/amazing visual liberties). I especially cannot be forgiving when there have been so many good “comic book movies” that are fantastic stories first and the comic book elements are second. Sure, superheroes and tight leather-clad vigilantes fighting more than war issues is far-fetched, but at least within the movie you are left with a sense of realism to the situations an attachment to the characters.

There are also geeks that get mad when canon is changed and the source is skewed. Depending on how it is handled, I’m usually one of these geeks, too. The original X-Men Triolgy followed loosely the canon, but I was forgiving as it was still a decent film (until the third one – kill that with fire.) First Class came out and I went kicking and screaming because there was NOTHING about the “First Class” team in the premise and trailers. I saw it and loved it quite a lot because it was well played. Many can argue that Marvel skews the continuities as well, but the movies are so awesome and you have such a great time watching them, you end up not caring.

ASM2 failed. It did not solve anything where the first one failed and only brought upon more mess, boredom, face-palming and groaning. The heart of the source is gone and the soul is nowhere to be seen. No fun at all.

Can Marvel just have Spider-Man back, now? Sony, you have used up your privileges. 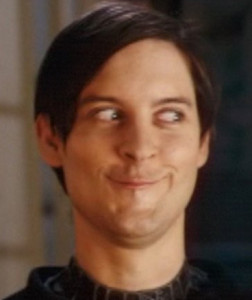