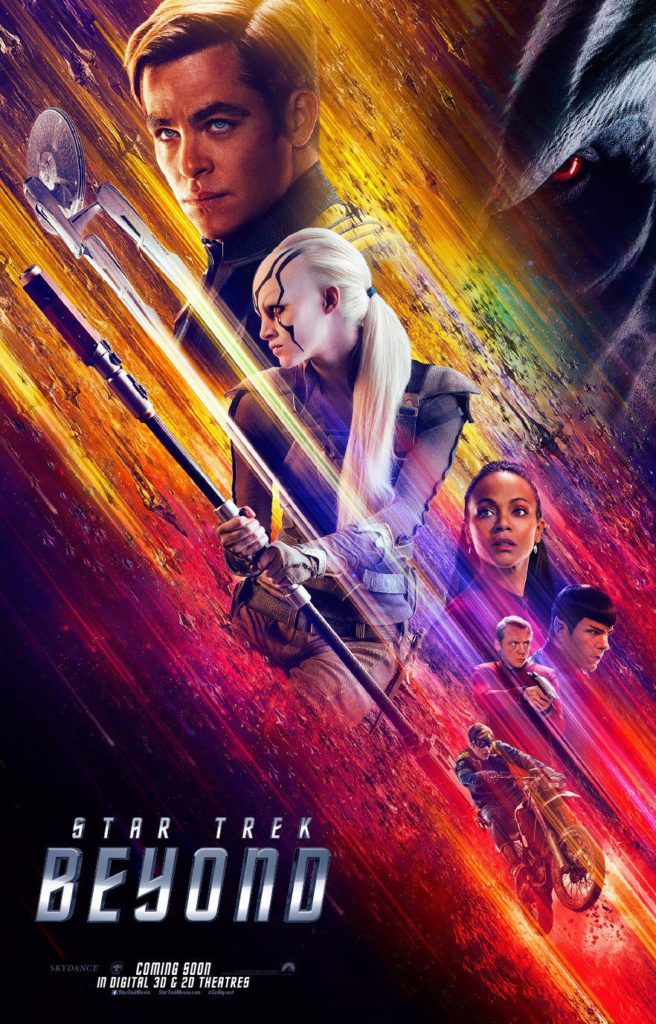 After the let down (movie itself and publicity stunts) of Star Trek into Darkness, I wasn’t ready to jump to the latest installment. However, Simon Pegg as the head writer made me feel better about Star Trek Beyond.

The USS Enterprise ports into Yorktown for crew leave and supplies after three years into their five year mission. Kirk recommends Spock to be the new Captain of the Enterprise to the Vice Admiral. Unbeknownst to Kirk, is that Spock learns that Future Spock has passed and he then feels a deep need to be with New Vulcan.

After receiving a distress signal, The Enterprise dispatched on a rescue mission to an uncharted nebula. They find Kalara, claiming her ship is stranded on Altamid, a planet within the nebula. The Enterprise is ambushed by an alien named Krall (Idris Elba) and his swarm of small ships. Krall and his crew board the ship, and unsuccessfully search for a relic called an Abronath that Kirk had obtained for a failed diplomatic mission just before docking at Yorktown. Capturing and jettisoning crew members left and right, Krall continues to destroy the Enterprise and the saucer section lands on Altamid.

The crew is separated. Uhura, Sulu, and the majority of the crew that survived end up in Krall’s imprisonment camp. McCoy and Spock land near one another, Spock wounded. Kirk finds Chekov and Kalara and they make their way to the Enterprise to try and use it’s communications to locate the crew. Kalara betrays them and lures Krall to the ship to retrieve the Abronath. to escape the soldiers, Kirk activates the thrusters, leaving Krall’s troops and Kalara behind. Scotty gets out of his escape pod and is surrounded by Krall’s men until he is saved by a rogue survivor named Jaylah (Sofia Boutella). She takes him to her home, which ends up being a hundred year old missing Starfleet vessel, The USS Franklin. Jaylah explains she once escaped Krall’s encampment, so Scotty asks her to bring him there so he can rescue his crew. On their way they find Kirk and Chekov, and then they begin to rig the old vessel as a base and repair it’s transportation beams and communications to rescue the captured crew.

At the encampment, Krall finds the crew member that Kirk entrusted the Abronath for way before Kalara came looking for it. The Abronath is the missing piece of a bioweapon created by the planet’s original inhabitants to disintegrate any humanoid life form. The device complete, Krall intends to attack Yorktown and the Federation headquarters. Kirk and the others free the crew as Krall launches into space with the bioweapon, leading his drone fleet to Yorktown.

After rescuing the crew, the follow after Krall in the Franklin. Scotty transports Spock and McCoy onto one of the drones and they dispatch the pilot. Soon they discover that VHF transmissions can disrupt Krall’s communications and destroy his fleet of bee-like behavior. Krall escapes and flees into the city.

Uhura and Kirk look through Franklin‘s logs and find that ‘Krall’ is actually Balthazar Edison, the former captain of the Franklin. He was pre-Federation human soldier, becoming disillusioned with the newly founded Federation, and rejecting the news ways. When he and his crew were stranded on Altamid by a wormhole, he believed the Federation deliberately abandoned them. Krall and three of his men extended their lives with the technology of the planet’s extinct natives, losing their own humanity, shifting their cells to change their physiognomy to the alien race. Krall plans to destroy the Federation to keep the natural chaos of the galaxy in tact. Kirk runsdown Krall into Yorktown‘s ventilation system, where he activates the bioweapon. Before it can be unleashed, Kirk ejects the weapon and Krall into space. Spock and McCoy save Kirk before he could be sucked into space.

Kirk opts to remain as captain, and Spock chooses to stay in Starfleet, despite early repercussions of returning to his own people, and resumes his relationship with Uhura. Jaylah is accepted into Starfleet Academy based on Kirk’s recommendation. They then resume their five year mission.

My favorite aspect of this film was how it wasn’t completely focused on the Kirk/Spock dynamic. With the movie-verse time of passage, the crew feels more like a family. Characters like Sulu and Chekov (the late Anton Yelchin will be missed) had a chance to show how much worth they have. I was happy to see that Jaylah wasn’t reduced to Kirk’s Girlfriend of the Week like I had feared. She was strong and independent and was an important piece to the film.

What didn’t jive with me in this movie was how clunky it felt in places and the villain’s motives. I loved Idris Elba (I cannot get enough of him being in everything this year!) but his story and reasoning for wanting to not just take out the Enterprise, but everyone else, felt very weak.

While it was an “Okay” movie, I let the flaws slide because I could feel the heart behind it. I didn’t grow up on the TV series like many did, but if I did, I’d hope it was a lot like this. Bravo to Simon Pegg and I hope his hand blesses later installments in the franchise.