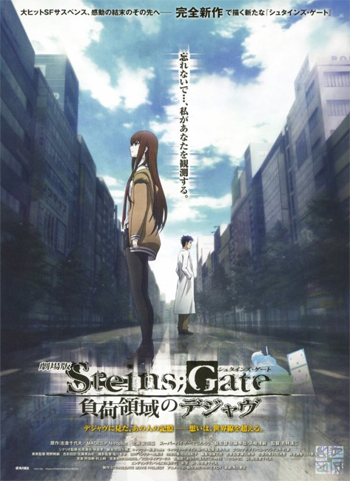 I was really excited to finally watch this movie. Due to my impatience, I downloaded subtitled and had it sitting on my laptop for about two weeks, thinking it was going to be a roller coaster of emotions like the series was and my feels weren’t prepared for it. We finally sat down to watch it on Friday and, well, it was disappointing. I still liked it to a point, and I’m glad I watched it, but I had such high hopes and it just… fell apart.

It takes place a year after the events of the series. The Future Lab Members are still hanging out, Moeka is working at the shop below the lab with Mr. Braun and Kurisu is shown boarding a plane from the states to come back home to Japan. Okabe’s “Reading Steiner” is becoming unstable and he keeps having flashes to the other world lines, some he lived and some not, and disappearing in and out of them entirely. The only one that sees/knows what’s going on is Kurisu, so it leaves the rest of the characters there as very supportive cast. Her second night of her return home to Japan, Kurisu has a creeper visit her hotel room and tells her to remember a cellphone, a microwave and SERN.

Kurisu, like what was shown in the OVA, also keeps having memory flashes of the other world lines and her times with Okabe leave her feeling very conflicted, being the tsundere she is. She confronts him about the memories and relates the instances as deja vu and possibly a version of Reading Steiner for those that are less gifted. He suddenly disappears before her eyes and she and the other members are left with a very faint memory of a certain someone.

A week passes by in this world line without Okabe and Kurisu finds a fork that he had left behind and remembers the words the stranger left her. For whatever reason of which does not make sense, and one of my biggest problems with this film is, Daru randomly decides to hack into SERN. But wait… they needed the IBM1500 to do that in the series… how could such an important plot point be glossed over like that?! And then she has the urge to build a Time Leap machine, hoping to find the person she has very faint memories of. Okay. Using the machine, she goes back to the night she arrived in Japan and she observes Okabe disappearing and reappearing from existence, with everyone’s memories of him changing accordingly.

She’s then contacted by the visitor from before, revealed to be Suzuha Amane,  who is much less grim and foreboding about an awful future, who came from the future using a time machine that Kurisu will build. They find Okabe and Suzuha explains to them both that all the memories of World Lines Okabe had visited is overloading his Reading Steiner, causing him to fluctuate between the current world line and the “R” world line, the only other world line where neither Mayuri nor Kurisu die. Suzuha states the only way to save him from vanishing completely is to use a time machine to travel to the past. Okabe flips right the heck out and fricken’ rightly so – he doesn’t want anyone to have to experience the pain of watching someone constantly die, and the prospect of failing over and over again and the stress of multiple memories – he learned his lesson and doesn’t want anyone else, let alone the woman he loves, go through it! He tells them he would rather disappear to allow Kurisu and Mayuri to live the remainder of their days in peace and urges her to forget about him, and leaves her with a kiss. That was probably the closest to the emotional tug to the series as it gets. But holy crap, dat Mamo.

She gets a single text the next day saying “Goodbye”. Unable to follow through with Okabe’s words, she runs to the lab for the chance he could still be there as her memories of him had not left. To parallel the series, just as she tries to utter the words of love, he disappears. After questioning Daru and Mayuri if they saw someone in the room a moment ago. Nothing. She collapses to her knees in tears. It’s then that she accepts she has to live on and try to forget, all the while it becomes easier as he parts further and further away from her memory.

After a few days, Suzuha shows up again and basically calls Kurisu out on it, that she needs to be true to herself. In order to fix Okabe, she would need to implant something powerful enough in him that would root him in the time line.  It takes some convincing, but she finally agrees to try and goes with Suzuha in her time machine to Okabe’s past where she tries to talk to him and instead he saves her from getting hit by a car and dies on impact (also another parallel to the series). She returns to the present and, of course, freaks out and sees why Okabe was so against her trying to change the past. Too afraid to try again, she goes back to the lab.

The next day, Mayuri and Daru are having vague memories of another person in the lab. Kurisu does her best impersonation of Okabe’s persona of HOUION KYOUMA and it awakens them all to their beloved member. Ambitions renewed, she finds Suzuha and uses her time machine to go back in Okabe’s past. They meet at a train station and he is sad about a friend going through a hard time (Mayuri), and Kurisu encourages him with the persona he would then develop to “kidnap” Mayuri and become a mad scientist and also kisses the teen Okabe, bringing him back to the Steins;Gate Line.

As I stated in the summary, not having the IBM and being able to make the Time Leap Machine makes no sense. It was very key to the series, and not having it made me very, very mad. Daru MAGICALLY decided to hack into SERN? For what point and purpose? How were they able to make the Time Leap Machine in such a short amount of time with all these complex formulas that clearly took them days to figure out? And then there’s the fact that Okabe blinking out of the Steins Gate World Line doesn’t make sense as that’s what the series did – FIXED IT! While the concept of deja vu was slightly touched on in the series, the fact that Kurisu could maintain most of her memories took away what made Okabe so special. When he was undoing all the D-Mails, everyone had memories of their other life, but once returned to normal, they didn’t. This doesn’t seem to be the case with Kurisu. I get that the movie was trying to be poetic as Okabe spent the series trying to save the two girls and Kurisu turned out to be the love interest and her trying to sacrifice herself for him is all well and good, but… that’s not what made the series great.

Steins;Gate was great because it had very grounded and established rules of time travel. It started out goofy and silly with a little bit of What, and then took a turn into a thriller of emotions. I felt the movie was relying solely on the emotions of the love relationship ONLY and not everything else that lead up to it. Obviously there’s still time travel, but I felt that the laws were ignored for TWUE WUV. Don’t get me wrong, I love my ships as much as the next person and my favorite bits were Kurisu being drunken and letting all her ambitions out on a very flustered Okabe, and him telling her to forget him. But I felt cheated in this movie because the reason they are so great together and the reason this series works so well is because SCIENCE!

Kurisu spent a lot of time being passive, and didn’t really DO anything until she was prodded and that bothered me in relation with Okabe who kept trying and trying until the impact of Mayuri’s death didn’t affect him morally. That was one heartbreaking thing about the movie was seeing Okabe fairly hollow. He was so resigned to the fact that he was disappearing, he flat out said he didn’t care it was happening. He saved his girls, what more did he want?

Would I say fans of the series should see this movie? It’s good if you’re going in for OTP feels without any regard of anything else. It was fun to see everyone again. We got a hint of Daru contacting his would-be wife to have Suzuha in the future. But other than that, it negates what the series established and it makes me want to punch things.

Here, have an Okabe, because this face is the best. 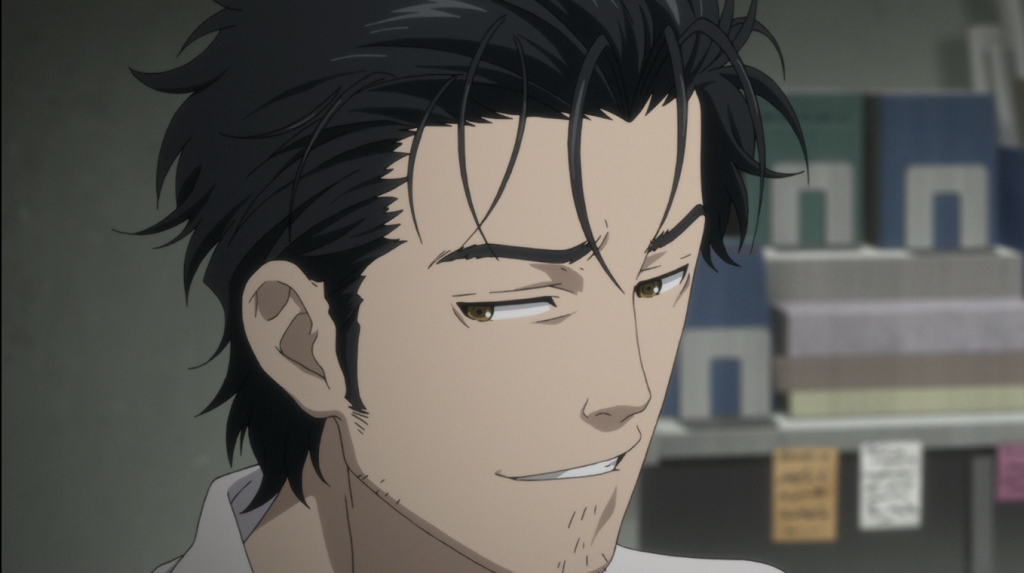