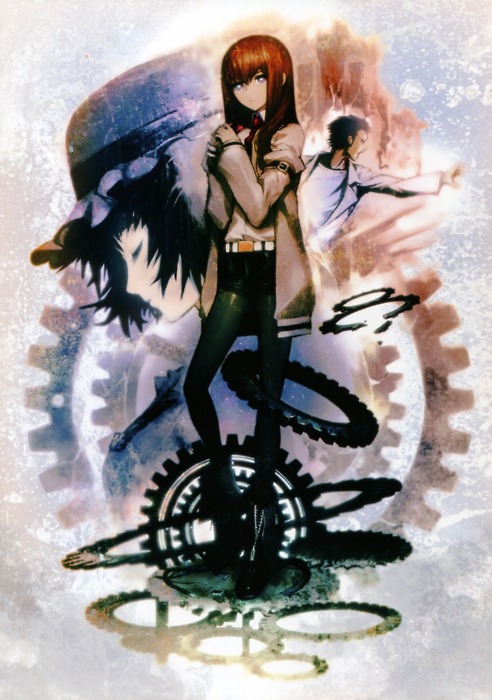 The microwave is a time machine? Yep. It sends texts into the past? Yep. How on earth can this anime be so amazing?

Aaaaaaand confession time. My usual methods didn’t quite catch my interest with the series. It would have been a series I’d wait and hear the buzz, but seeing Miyano Mamoru’s name as the lead… yeah Shallow Fangirl Powers activated. I don’t regret it. Never. Ever.

Okabe Rintarou aka Okarin aka Hououin Kyouma is a self-proclaimed Mad Scientist. He’s intelligent surely, but not exactly the level he thinks himself to be. His friends see through his facade but allow him to act as he pleases and carry on as his ‘lab members’ and test various creations/experiments. Or in Mayuri’s case, his hostage!

While on his way to a presentation on Time Travel at his university, Okabe runs into Makise Kurisu – a girl that exceeds his own intelligence and even has published works. She accuses him of needing to tell her something important. Finding her a spy from “The Organization” he runs away with a cackle only to experience an earthquake and hear a blood-curdling scream. He searches for the source of the scream and finds Makise laying in a pool of blood. Freaking out, he leaves the building and sees a satellite has crashed on the roof. Again freaking out, he reaches for his phone to text Daru about the girl he’d just found dead. Once he presses “Send” he’s then transported to a deserted Akihabara. The sound of car horns and Mayuri bring him back to his senses… of sorts. The crashed satellite is all over the news, but there is nothing of Makise’s death and Daru is talking about going to the lecture. Again? Okabe asks him if he got the text of Makise’s murder and it’s not in his inbox nor in Okabe’s outgoing box. On their way up to the lecture hall, Makise is leaning against a pillar and very much alive.

Confusing first episode, right? But in my experience, the first episodes are always a little rough and/or confusing or not very interesting. And my love for Mamo, I just wanted to know where the series was going to go!

For a show like this to work, I think you have to feel emotionally attached to the characters and I believe this achieves that. Especially in regards to the second half of the series. They are all social mifits in their own right – eccentric self-proclaimed mad scientist, a child prodigy rejected by her father, an innocent cosplayer, typical shut-on otaku, and a debatable transgender – a bunch of geeks dabbling in the impossible. You start to love their relationships with each other; The sidekick nature of Okabe and Daru, the protective nature Okabe has over Mayuri and her adoration for him, and the banter/brewing romance of Okabe and Makise. You can give me a great plot, but I won’t care if I don’t care about the characters inside it.

As for the dub… I don’t care what anyone says or tries to convince me otherwise, FUNimation did a FAN-FREAKING-TASTIC job at dubbing this. Obviously I haven’t seen Part Two yet and that’s when the series takes a big turn in tone and that will be the ultimate test to see if it stays great, BUT the cast has greatly surprised me. The care that went into the script and everything. It’s glorious. When FUNi announced more than a year ago that it had the rights I was :D! Then thought more about it and it became kind of a 😐 More often than not I’m a dub fan, but I loved the Japanese version of Steins;Gate so much, I didn’t want it to be treated like any old show and cast any voice actors in their rotation. It’s not to say I don’t love those voice actors already, I just wanted a fresh feel on this series and couldn’t picture anybody being these characters.

J. Michael Tatum is a perfect Okabe. No he is not better than Mamo (no one ever will be o_o Ever) but for an English adaption, he is perfect for the character. He captures the tones and humor and more in a sophisticated manner… or I’m just used to him being serious sophisticated characters all the time … idk. However, he has not perfected THE LAUGH

I wasn’t totally familiar with Trina Nishimura before hand. I knew some minor characters, but nothing to convince me. After a few episodes I was pleased.

Jackie Ross is a new girl, and because of that I was a little worried that Mayuri’s already high and annoying Japanese voice was going to be worse or sound wrong, but nope! She has done a marvelous job.

Tyson Rinehart is like Trina how he’d only done minor roles. I liked how he didn’t sound like the Japanese voice – a fat and nerdy geek – Obviously he’s still Daru, but the voice doesn’t make you think he’s big dumb guy.

I’ve only known Cherami Leigh from Soul Eater and her Suzuha is fantastic.

Everything is fantastic. No complaints on the voice cast.

Initially I was worried about the translation of the Japanese pop culture. Being a fan of anime I was able to catch a few and find them funny, but most casual anime viewers wouldn’t get them. In listening to the commentary, it’s true that if you have to Wiki a reference it takes away from the humor. So, it’s not necessarily accurate/canon to have Doctor Who references in an anime taking place in Japan, but Okabe is the type he’d probably be a fan anyway. In other words, the localization was thought out. Although, I’m sad the “waifu” was dropped 🙁 My favorite aspect of the script is that J. Michael Tatum himself was the head writer. It’s extremely rare that the main character writes the script. I applaud him.

I totally hope they say exactly this when it gets to it.

Steins;Gate has a slow start, but it’s all in the name of attaching yourself to the characters before stuff gets real. It’s a non-stop punch in the feels after episode 12. The first half is slower, but it’s hilarious, entertaining and has amazing build up. Everyone knows toying with time isn’t a good idea, and it’s fun to see them discover just that.

Stick around for my review of part two coming in December!

And today I discovered that it has held the #1 bestselling anime bluray/dvd slot on Amazon for four weeks. And is the #1 rated anime on Anime News Network. It’s getting a buzz now and it makes me incredibly happy! It’s getting popular! Go watch it. Now!