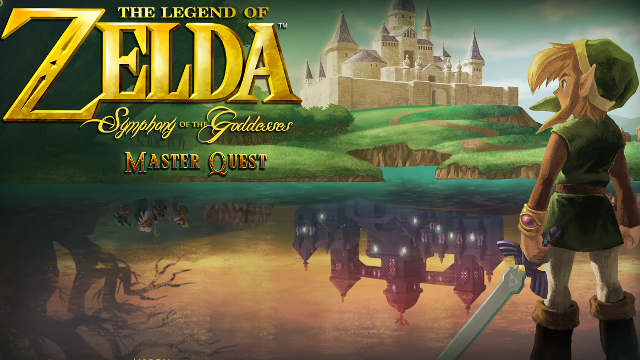 Whenever I go to Video Games Live and the play a Zelda arrangement, I can’t help but think about how pleased I’d be if they decided to play an entire concert dedicated to the music of Zelda – there’s 25 years worth of content they could chose from, it wouldn’t be hard at all. Fortunately, someone had the same idea and decided to start doing the same thing VGL does with traveling across the country and rehearsing with city/state symphonies.

I’ve been looking forward to seeing Symphony of the Goddesses all year (well, since they started the tour in 2012, really). At first I thought I’d need to drive to Austin or Houston as Dallas was added much later in the roster, but the Goddesses were smiling on me.

The concert was held at the Music Hall at Fair Park (not my favorite as the acoustics need work. At least the seat cushions have been replaced, but there is literally no leg room) and was performed by Dallas Pops. Our seats were balcony center, not horrible, though high enough for light fixtures to obscure our view of the top portion of what was shown on the screen. They started 30-minutes later due to the rain the state has had over the last week and several orchestra members had not arrived. It was fine, as there were several audience members still filing in as well and that’s always disruptive.

With the disarray, it seemed to have effected the conductor and the orchestra as the music was off-sync to what was shown on screen. Fortunately the creator gent of SotG came on stage and said they’d be doing it one more time with the addition of A Link Between Worlds segment beforehand that should have happened as well. Once everything was aligned correctly, the proper emotions overcame me and I was tearing up.

I’ve had the special sample CD that was included with Skyward Sword and I can’t tell you how many times I’ve listened to it. Because of that, the concert was minorly spoiled for me. Although, I found Dallas Pop’s performance of Gerudo Valley and The Wind Waker Movement to be above the recording that I have. Twilight Princess is my favorite Zelda title, so that was a guarantee to get me emotional, though not as much as A Link to the Past did. On top of arrangements from specific games, the opening overture did cover all games, but there was also a Battle compilation between a few of the games and I thought that was neat! I was surprised that Ocarina of Time didn’t have more spotlight, nor was there a huge, full-blown main theme number. Gerudo is technically Ocarina of Time, I suppose, and did have an nontraditional movement as hardly any of the Ocarina songs were within it. The Wind Waker had two large movements as well as Majora’s Mask. After a faux finale and encore, they ended with Skyward Sword which was absolute perfection. I’m curious what the rosters looked like for previous shows as each leg has gone with a different theme.

Dallas Pops put on a great performance covering the 25 years of Zelda and transforming the familiar midis into orchestrations. The soloists sounded amazing and I love how the conductor didn’t move on to the next piece until she acknowledged them. Also, I can’t say I’ve been to a concert with a lady conductor before, so that was a treat as well. The choir was a little quiet, but that may be due to where our seats were at/not that great sound within the venue. It’s not as flashy as a performance as Video Games Live, but that’s just fine as it really gave you the time to feel it.

It was a fantastic night being surrounded by thousands of nerds that love Zelda as much as I do. I got chills so many times throughout the night and it made me so happy for the cheer that went up for A Link to the Past.

If you see them touring near you, don’t hesitate. From what I can tell, they are only doing three legs and last year will be the end of the tour. I highly recommend it!