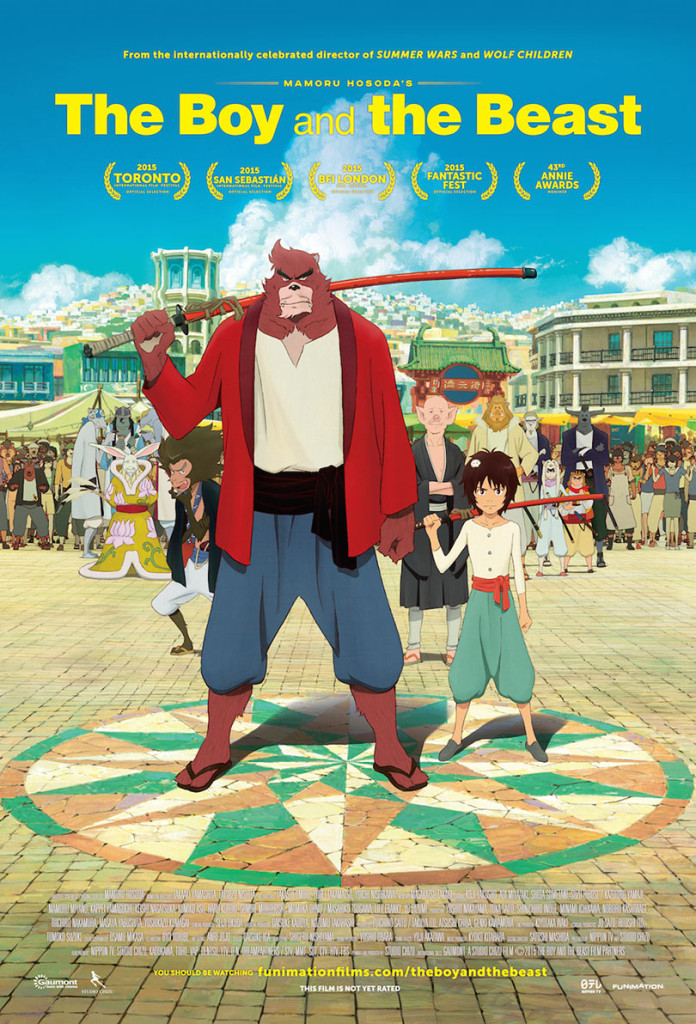 Funimation has brought Mamoru Hosada’s latest film to the states for a limited engagement and Zach and I had the opportunity to see it.

The Boy and the Beast (Bakemono no Ko) is the story of Ren, a boy whose mother recently passed away and is in the midst of being shuffled to another family member. With his parents having been divorced prior to his mother’s death, he doesn’t know the whereabouts of his father, nor does he want to stay with his mother’s family. Ren runs away and wanders the streets of Shibuya where he comes in contact with a beast who offers him an apprenticeship. Too stunned by the appearance of the beast and the one next to him, the two move in. To avoid the police finding him and forcing him to return to a place that no longer feels like home, Ren follows the beast through a series of passages and emerges into the beast god land of Jutengai.

The beast introduces himself as Kumatetsu, a bear/tiger warrior who seeks the perfect apprentice to aid in his goal to become Jutengai’s next lord. Kumatetsu’s gruff, self-centered attitude make getting along with him difficult, but with nowhere to return, Ren agrees to be his apprentice and is given the name Kyuta. Unfortunately, Kumatetsu’s teaching skills are lackluster so young Kyuta resorts to mimicking his new master’s movements like a duckling and pretty soon they are teaching each other. Kyuta spends many years in Jutengai making friends with the beasts and developing a father/son relationship with Kumatetsu.

Once a young man, Kyuta finds himself unlocking the passage pattern back to Shibuya and he is forced to decide between the two worlds and entwining fates.

The Boy and the Beast is a beautiful Coming of Age story with many elements of Bonds running Thicker than Blood and Believing in yourself. Stunning animation and accompanying a moving score. Colorful characters and a ton of heart to boot, Mamoru Hosada has done it again! Honestly I’m enjoying his films more than Studio Ghibli these days. While also weird with new worlds and mythology, they aren’t as… abstract? One thing that I really liked was seeing a place I’d visited on the screen!

We saw the Dubbed version and were thoroughly pleased. Luci Christian has been one of my favorites for years, so it was great to hear her as young Kyuta on the big screen. John Swasey hams up Kumatetsu to perfection. Ian Sinclair as Kumatetsu’s ‘sidekick’, Tatara, was a hoot (honestly whenever Ian is involved in a project, my enjoyment levels grow a lot just for how much snark and life he brings to a role). It was really great seeing some newer talent like Bryn Apprill, Morgan Berry, and Austin Tindle get to have a role on the big screen like this! All around the dub performances were amazing and enjoyable. I, however, wish to see in Japanese still for my bias of Miyano Mamoru. Alas.

If you like Wolf Children or Summer Wars or any Ghibli Film or any good movie, really, you’ll love The Boy and the Beast.

Check out listings HERE to see where it is available near you. Available in English dub or Japanese Audio with English Subtitles.