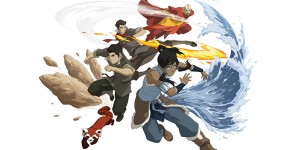 WARNING I will be talking about the entirety of The Legend of Korra. There will be Spoilers. I do not want to be responsible for fan-rage due to spoilers. Please do not read on if you are sensitive to such things.

The Legend of Korra (season one) has ended. I have mixed feeling about. On one hand I like how the finale was handled, but at the same time it felt somewhat anti-climactic. Don’t get me wrong, I still really liked it, but as I sit back and thank about the 12-episode series it all just seemed too easy?

Given it is an intended mini-series of 2 seasons (26 episodes in total) I see why somethings seemed rushed and underdeveloped. But would have liked other things to have been less rushed and shoved in your face.

The series focuses on Korra, a teenage girl from the Southern Water Tribe and the current incarnation of the Avatar. She has already mastered the arts of waterbending, earthbending, and firebending but has yet to master airbending, which she must learn from Tenzin—the youngest child of Aang and Katara.

It is set in a Republic City, a metropolis inhabited by benders and non-benders of all nations and founded by Aang and Zuko after the 100-year war in the original series. The city’s police force practices the art of metalbending—a subset of earthbending—and is led by the daughter of Toph Beifong.

Korra meets Mako and Bolin of a pro-bending group called the Fireferrets and they become friends.

The conflict of the first season centers upon a group of anti-benders, called the Equalists, who use chi-blocking and electrified hand weapons to subdue their enemies. Their leader, Amon, has the ability to take bending away.

Hmm. Ya know, since I hope by this point those that are reading this already know what happens. So I’m going to just spew thoughts at you.

What I’ve really enjoyed about the series has been its pacing. I love Last Airbender a great deal, but there were some episodes that just seemed to be there to draw the series out, explore the world, gratuitous character-centric episode that didn’t really seem necessary. Korra’s faster pacing was likely due to paying homage to the fans of Airbender and they didn’t have to explain the world all over again, just enough of what happened after Airbender and how Republic City was born and the relationship of the Benders and Non-Benders. And because of the small episode count, but whatever.

The conflict was introduced in episode three. Already you’re emotionally invested in what is going on. Amon is rallying the non-Benders against the Benders, saying he was attacked by Firebenders and that benders are evil. The very next episode, Bolin is kidnapped and Korra and Mako have to save him.

While Airbender’s episodes ended with some message learned about love and friendship and what not, Korra tended to end with cliffhanger endings, DOOM on the horizon and punched in the face with feelings.

The dynamics between the antagonists and protagonists is fantastic. Every episode I loved the builtup tension as you discover who the badguys are.

My favorite aspect of the series is the flashbacks to the characters from Airbender in their older states of life. It’s like a little treat to the faithful fans as well as serving you small hints of the truth of the antagonists. Seeing Aang, Sokka and Toph as adults and being important figure heads in society is really cool.

My shipping/pairing preferences aside, I do not like Mako. He didn’t do anything to earn my love for a character and only continued to make me dislike him. I do not appreciate how he treated Asami. I know they are teenagers, but cheating on his girlfriend and pretty much lying to her that he was, was really low. After watching the finale again, I suppose their last exchange was a bit of a resolution, but I still had a sour taste in my mouth. I suppose he occasionally acts like he cares about his brother, too.

As mentioned before, I love Bolin. I tend to like the characters that are happy-go-lucky goofballs that have a slightly to very traumatic past. He’s so good-natured and such a good friend to everyone. It’s a shame his character development served no purpose after episode five.

My heart also goes out to Asami. She got so much fanhate early on and I never wanted to succumb to it because I had hopes that she would stick around and be important. And guess what, she did and was.

Lin gets the coolest character award. From the first episode, she’s portrayed as a strict no-nonsense woman, but I still really liked her. Then she kept coming back and displayed soooo much awesome.

I’ll just mention as a whole that I love the women/girls in Avatar. They are all very independent and don’t wait on the men to help or rescue them. I really respect the writing that goes into the girls of the series.

As for the finale. I’m conflicted. While watching it, I was really excited and into it and begging it to not end. I laughed and cried and raged. Then sat back and kinda thought it was somewhat anti-climactic. But at the same time, it almost could end where it was; the bad guys got away and then seemingly exploded (holy cow, that scene! I was so shocked… very brave move, Bryke), Korra got her bending taken away and restored as well as her airbending, Hiroshi was stopped, Korra and Mako hook up, etc.

It felt a bit rushed because the most important situations became resolved at the end of season one, instead of expanding onto season two. I was crying when Aang appeared before Korra and gave her her bending back – it was so beautifully done! Then I’m like “Wait, that was kinda easy… all this time she was freaked out and she got it back like that.” Granted she was crying and she was the lowest she ever could be. Thinking deeper, she was able to connect with Aang because she felt so lost and weak and needed guidance. Then a crueler side of me wanted her to be an Airbender for a while and gradually unlock the chi to her other bending and that be what she has to work for in season two.

Then I’ve gotten to think that instead of having three “books” like Airbender, since she’s already a master of earth, water, and fire, it only needs to be called Air. I know it’s not supposed to be a journey series like Airbender, but I love it so much that I wish it to be longer.

Overall, my biggest beef was that the relationships were so forced early on in the series. Personal preference, but I don’t like these kinds of epic tales and then have a pairing shoved in my face after very small and subtle things happened for the span of four episodes previously. I like subtle build ups, so then you see things and appreciate it a lot more.  It wasn’t a main focus of the series, but it was focused enough that I think the time could have been better spent on something around the plot or developing the characters as individuals and not their relationship appeal.

I’m confident that whatever is in store for season two will be awesome. Are Amon and Tarrlock gone? Who knows. Will Korra and Mako be end game? I don’t want them to, but probably. Will Bolin learn metalbending from Lin and have character development? I hope this most of all. 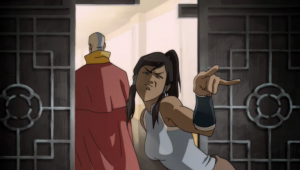