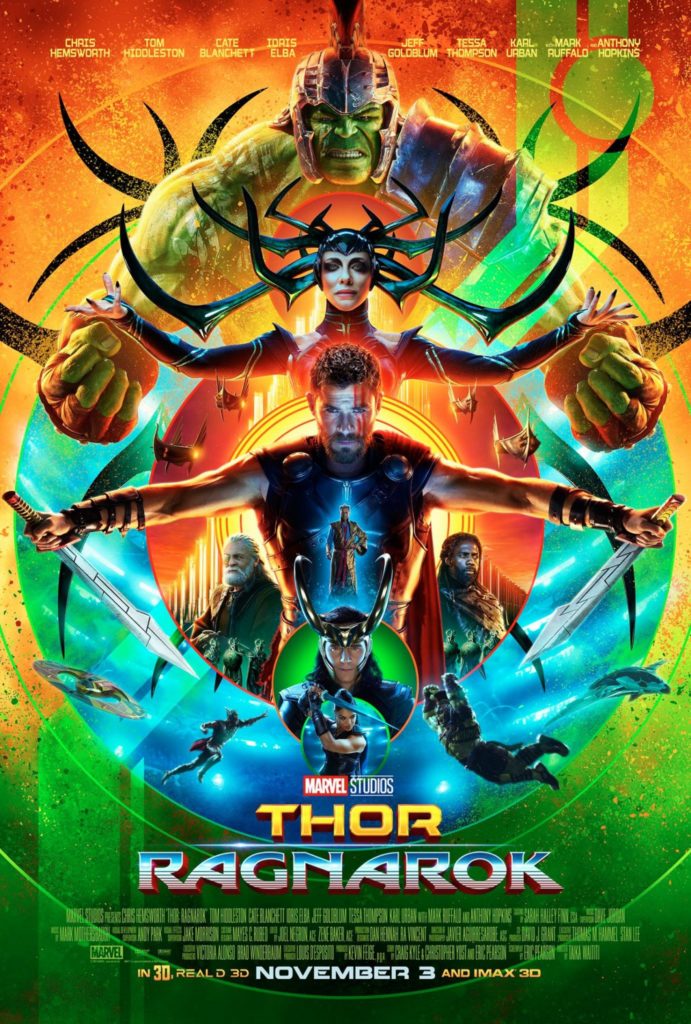 The third and final Marvel event of 2017 is here and it’s no wonder Thor: Ragnarok it’s the year’s most anticipated film of the fall season.

Director Taika Waititi shifts the overarching dark tones from Thor: Dark World into something fanciful and campy. While the stakes were indeed high like we saw from Thor’s visions in Avengers: Age of Ultron, when it came to it, you were too busy laughing (or questioning your attraction to Cate Blanchett as Hela) to feel the weight. Marvel does its fair share of intermingling Drama and Action, but it’s those dashes of humor that help carry it up out of the grim dark. Guardians of the Galaxy was the first in the Marvel lineup to be branded as a comedy and it worked well towards audiences warming up to the world and characters. With each installment in the Universe, there’s a purposeful change in the genre.

But when we’re this close to Infinity Wars and so many characters that we have been with since the first Thor film are being killed off as an aside, events and character development being downplayed, I take issue.

The rest of my review will obviously contain spoilers, so proceed with caution.

I loved this movie. I laughed a lot. Probably the most I’ve laughed in the theater all year. Despite the overall good time I had, I couldn’t help feeling duped. And maybe that was the goal all along? First off; Odin. I can’t say I’m surprised he was going to die at some point during the franchise, but the fact that the explanation of Loki banishing him to Earth and then dying the moment they get there to don the Exposition Hat was lazy. For such an important character to kick the bucket and neither Thor or Loki seem all that grieved, although Hera showed up promptly after, so maybe it was a matter of time, but it didn’t give me, the audience, a reason to be sad about it. Then there are Thor’s warrior friends, Hogun, Volstag, and Fandral who die fighting Hela, which was heroic and noble, but Thor wasn’t present. Will he ever know of his friend’s sacrifice? With how calloused his reaction was toward Banner’s fears of becoming Hulk forever, it’s hard to believe he’d care.

Speaking of Thor not caring, it’s been well-known that Natalie Portman wanted to stop being Jane. Thor: Ragnarok took care of this problem by Thor casually telling a no-name character that they “broke up, it wasn’t working out”. Wrote her out. Just like that. For a character that was so important in Thor: Dark World, being a vessel for one of the Infinity Stones, you’d think she’d have a more substantial send off. Jaimie Alexander had filming obligations elsewhere, thus wasn’t in Ragnarok, but there was no mention of her character Sif whatsoever. I do hope they won’t write her off like they did Jane.

Thor’s character development really confused me in this film. Chris Hemsworth has proven he’s got some comedy chops, and I adore him, but Thor’s lack of compassion for Bruce, his disconnect from Jane, quick forgiveness of Loki, and general acting like a buffoon in several situations, I pause.

Now that the bad is out of the way, onto the good.

To be honest, Loki always being the villain is something I’ve grown bored of. I much prefer him being secondary. As much as Thor forgiving Loki bothers me, I love that he has no problem not completely trusting him and fires back with his own tricks. This kind of banter makes Loki reoccurring but more of a gag. For now they more or less have an agreement. We’ll see how long it lasts and if he’ll ultimately betray them (shock) to Thanos.

Jeff Goldblum was a great addition to the Marvel Universe. I think his existence distracted a lot of audiences from my issues above, but I loved how he just needed to be himself in space and it wasn’t at all out of place. Please let him and The Collector be on screen together.

Valkyrie (Tessa Thompson) was an intriguing character, a jaded Asgardian that works as a slave trader to make ends meet. A drunkard and a fighter. She fits well with the Marvel ladies and I really want her and Lady Sif to know each other.

Bruce. Oh Bruce, I feel so bad for you. Trapped on another planet for three years and stuck as the Hulk sounds so terrifying, I’m sorry Thor is too busy with his plans to sympathize with your worries. His fate was left ambiguous as he Hulked at the end and threw the credits, we really don’t know if Bruce Banner/Mark Ruffalo is out of the picture for good. I sure hope not.

If the trailers didn’t show Hela destroying Mjolnir it would have made more an impact in the film overall. Thor is God of Thunder, so I loved that the hammer proved to be only a tool and also a crutch. Thor proved he was a worthy king once and gathered his people to find a new realm to dwell. He’ll run into the Guardians, soon enough.

The theatrical poster is one of the most aesthetically neon grungy pleasing thing I have ever seen. The synthetic score and retro futuristic setting of Sakaar meshed so well together.

If you’ve been a fan of Marvel film thus far, you’ll love this one, too. Only in it for the Thor installments? You’ll also love it.