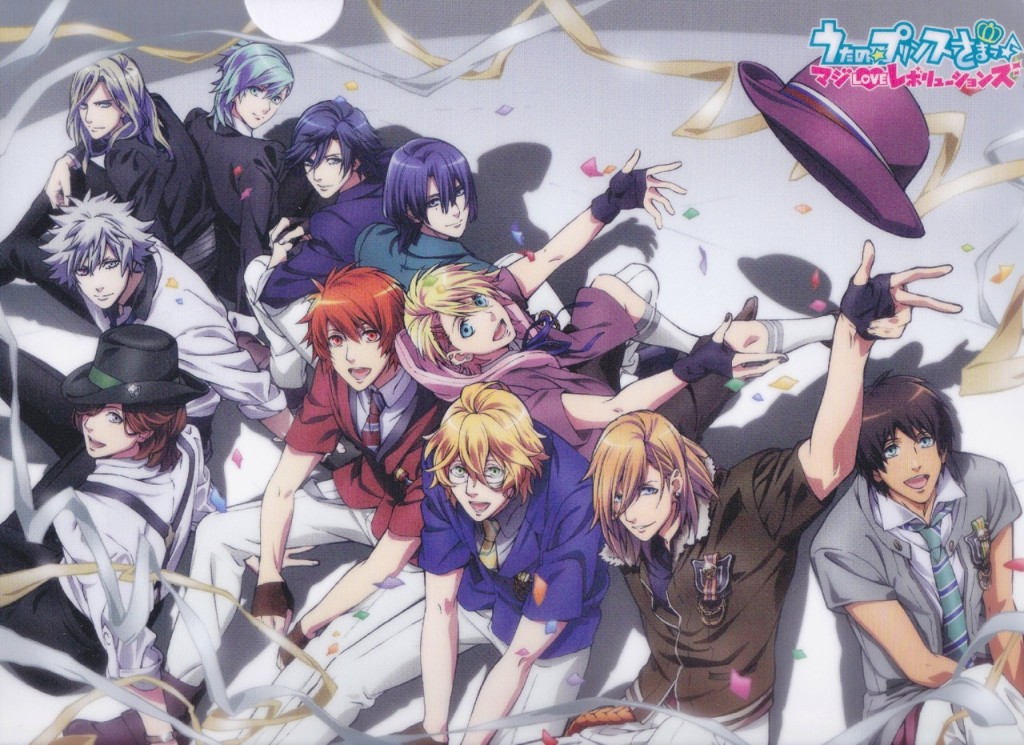 NOTE!: I am moving my column to Wednesdays \o/ I doubt anyone will notice any differences.

Yes I’m stubborn and insist on calling this dumb anime 3000% because I like consistency! I use “dumb” in an endearing way, by the way. Though when I say this season was the “dumbest” of all, I mean it is less dumbly endearing.

3000% follows after 2000% not long after winning the UtaPri Award and are content in their debut days and seem to keep busy in their idol careers alongside QUARTET NIGHT and are gaining popularity. But life in the idol world and working under Shining Satome is never quiet and easy. An international sporting event called SSS is on the lookout for an opening number. Shining informs QUARTET NIGHT that they will be the ones to enter the competition. STARISH is unhappy about this decision and argues with Shining that they are also worthy to compete for the opportunity, so Shining launches a new project he calls Cross Units to test them.

The episodes then accordingly focus on one Cross Unit at a time and lead up to the song at the end of the episode that Haruka writes the music for and the pair/trio have to write the words. Haruka has her work cut out for her as she’s expected to write solo songs for QUARTET NIGHT as well. She strives to make each song special and make it pertain to each person whether they are in solo or paired and it’s impressive in and of itself.  There isn’t much plot involved this season beyond that.

Then the finale totally came out of nowhere and HEAVENS from 2000% returns with four additional members to rival STARISH and claim the victory they lost and it ends on a cliffhanger of no resolution as to who will perform at the SSS. So, apparently the plot for 4000% will be a continuation of 3000% with backstory and new songs for HEAVENS.

To be honest, this season was a let down in a few aspects:

1. Art quality. 2000% had a few moments, but it never made me wince. Somehow this season was loitered with really bad off-model shots. My biggest complaint is the use of the ugly CGI that seems to be really popular these days used in the closing. What made the first seasons so charming was the slightly off sync traditionally animated dancing. Granted, it wasn’t the whole performance, but it was enough to be noticeable and make me scratch my head because the reason this franchise keeps going is because of how much money it is making!

2. Content Quality. The format wasn’t much different than the previous, but I felt the episodes were rushed towards the end to throw out the song and the it would end abruptly with the closing song. The characters didn’t really grow this season, either. It was fun to see them be paired with character they hadn’t been for the Cross Units and hear their harmonies, but the stories were pretty weak with problems presented with clear solutions but are typically drawn out for entertainment sake.

3. Music. The BGM wasn’t as up to par as I’m used to. Idol song-wise, I’d say this is probably the weakest season. There was some really strong songs that captured the characters marvelously (Reiji and Tokiya/Masato’s, respectively), but others fell flat for me. QUARTET NIGHTS’ grand number wasn’t as impressive as the characters wow-ing was trying to convince me of.

If you enjoy the UtaPri franchise, anime or game, I still think it’s worth watching for the moments that make UtaPri fun and enjoyable: Good songs, cute character designs, beautiful boys and their voices, light on plot/fun to turn off the brain, and silly fluff.

I really wish I could link to the opening/closings but they are being purged off Youtube like the plague!