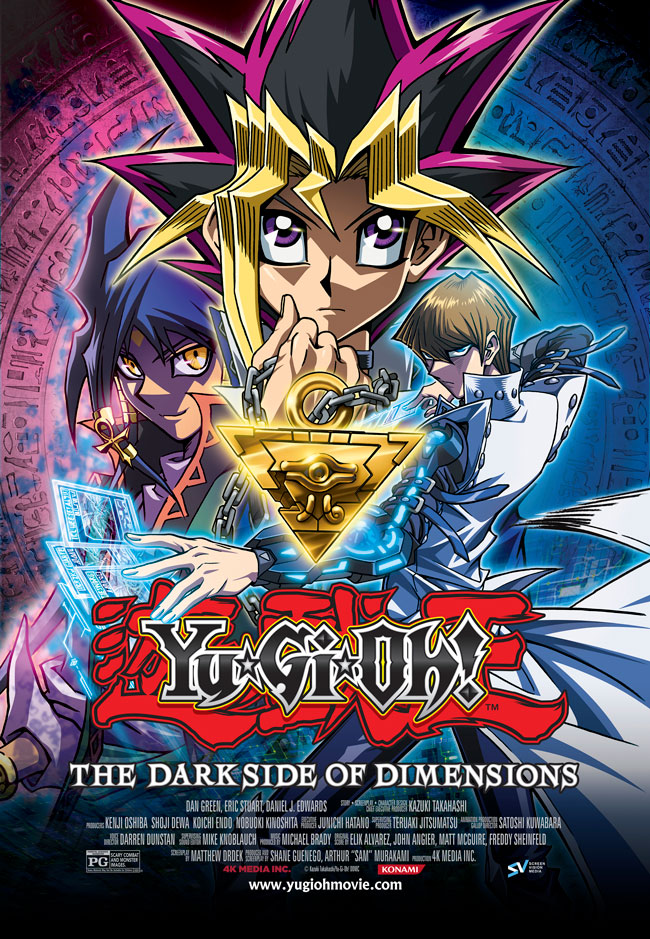 Yu-Gi-Oh! The Dark Side of Dimensions is the fourth theatrical release of the Yu-Gi-Oh! franchise. In celebration of the manga’s 20th anniversary, creator Kazuki Takahashi wrote and produced the story to be set directly after the events in the manga/Duel Monster’s anime. Those that may be wary of Filler Movies needn’t fear, as this one has the original creator fully behind it. It was released here in the states nearly a year after its Japan premier and fans were given the option to view it dubbed (with most of the original cast) or subbed in selected theaters.

A year has passed since Yugi and Atem had their duel and the pharaoh’s spirit has gone to the netherworld to rest. Determined to duel against the pharaoh and settle his own personal score, Kaiba funds an excavation team through his company to find the puzzle that was lost in the ruins after Yugi’s duel. They are interrupted by Diva, a mysterious boy that recently transferred to Domino City. The pair duel in a Dimension Area, a field constructed by a quantum cube that Diva possesses. In the middle of their duel, the machine that was analyzing the puzzle pieces beeps and Kaiba abandons the duel to retrieve the pieces with his brother. Mokuba taunts Diva and Diva steals two pieces from the puzzle.

Diva tries to befriend Yugi at school, full-well knowing he once was the vessel of the pharaoh, and plans to resurrect him, but for very different reasons than Kaiba. He also wishes to take revenge on Bakura, who he believes to have murdered his mentor, Shadi – keeper of the millennium items and (in this movie) teacher and gatekeeper of The Plana. Diva wants to restore the puzzle as it’ll link with the quantum cube and open up a new world free of corruption. In order to do that, he has to be rid of anyone in his way. He shows Bakura what happened when he was a child with Shadi, being taught about the millennium items and how they were to protect them for the pharaohs coming. Bakura’s comes that day and tries to take the Millennium Ring and is killed by the evil spirit residing inside instead. Vessel dead, the spirit goes to Bakura where it remains until the end of the anime series. Horrified, Bakura apologizes, but Diva won’t have it and transports him to a dark dimension. Seeing what he did to Bakura, Joey tries to fight back, but then is also transported.

With Joey and Bakura missing, Tristan alerts Yugi and they run around the city in search. While out, Yuri runs into Sera, Diva’s sister, and she gives him a piece from the puzzle. Soon after that he finds Kaiba, who saw Sera give him the piece, and informs him he’s kidnapped Diva and will be forcing them into a duel in order to rightfully win the pieces to restore the pharaoh. Yugi agrees to duel in order to rescue his missing friends.

Yugi defeats Diva and Bakura is set free and the piece is handed over to Yugi. Kaiba demands he put the pieces into his machine for it to continue building the puzzle and call Atem. Yugi tells him that Atem is gone, moved on to the netherworld where he belongs.While thy debate, Diva is consumed by the spirit of the millennium ring and forces them both into a joint duel to win the completed puzzle. Kaiba sacrifices himself, giving the remainder of his life points to Yugi and begs him to summon Atem. From the depths of his heart he hears Atem’s voice and for a moment they are one once more and they defeat Diva, who disappears along with his sister, returning to the Plana with that brief return of the pharaoh.

The film ends with Kaiba using his technology of virtual reality and the quantum cube he kept from Diva to transport his consciousness to the netherworld to duel the pharaoh.

These days it’s not surprising when an anime movie gets a theatrical release in the states. Especially when the dub series gained such a huge finally. Still, I’m ecstatic that we were able to see Dark Side of Dimensions. I’m a long time fan. I’m really glad this movie wasn’t as convoluted as Pyramid of Light or unforgettable as Bonds Beyond Time (unless we’re talking Yu-gi-oh the Abridged!)

As a long time fine, I appreciated the sequel aspect and how it still managed to cleanly give resolution even after. The friendship themes and hope for a better future were still highly evident along with staple humor and goading between characters.

The animation was amazing. Call me strange, but I’ve always loved the animation in Yu-Gi-Oh despite the strange choices in character design. The dramatic hand brandishing and card holding, though? Amazing. And the eyes? Sure it was like a high budget episode, but it was a delight to watch.

There was some concern on whether this movie would be edited like a lot of the episodes would be. It was addressed early on that that would not be the case and all footage would remain and keep a PG rating. The exception to the rule was keeping their English Dub cut names for consistency, and Diva/Aigami kept his name. On thing I found interesting though was that the English dub got its own score soundtrack and it’s fantastic and I really hope it gets a release.

If you’re a fan of the series, I highly recommend this one. Seeing as I took casual fans with me to see it, a casual/new fan would enjoy it, too!

You can see Yu-Gi-Oh! The Dark Side of Dimensions in theaters for a limited time! Look forward to a summer/fall home video release.