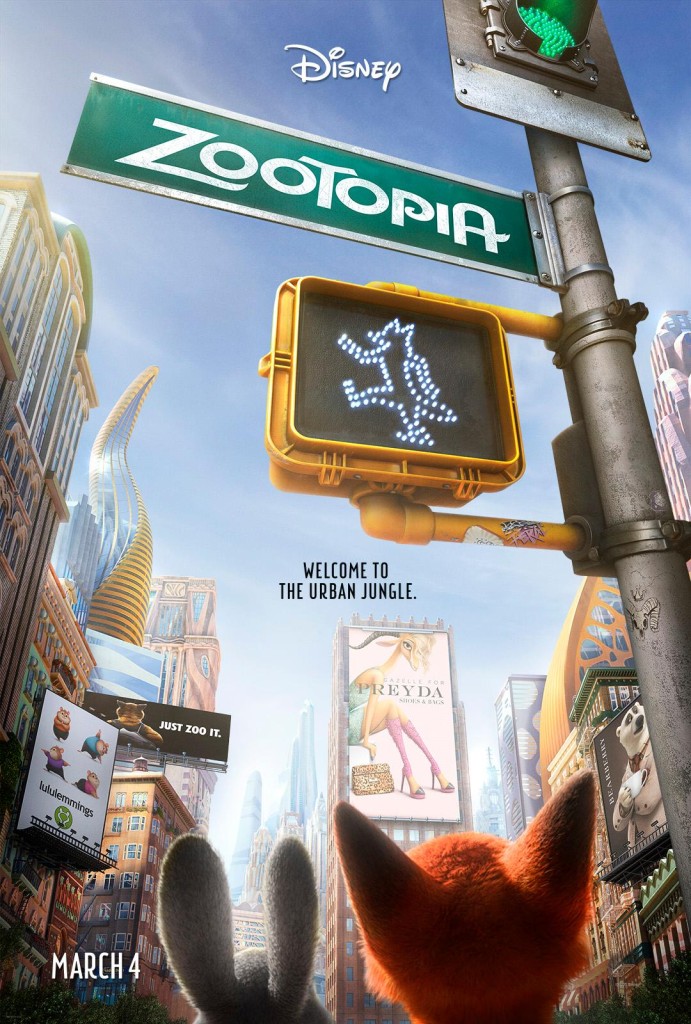 In Zootopia, predators and prey live together in harmony. The days of wild animals is over. Well, until you account that nature still blesses the predators with reputations for being big, fierce, and strong. While they aren’t eating each other, the food chain isn’t exactly equal.

Judy Hopps is a bunny from the countryside who dreams to write wrongs and bring justice to all animals and become a cop. The problem is, is that bunnies, or any small prey-like animal, have never become cops as it’s simply an occupation that requires skills of a predator animal. Judy insists she will leave her farming ancestors and be the first cop bunny!

She enrolls into Police Academy and after many trials and failures, she eventually picks herself up to succeed and graduate. She receives her post and travels to the big city, Zootopia – a giant metropolitan where all mammals big and small and from every climate can call home. Judy arrives at the ZPD and of course is met with mockery for a cute bunny enrolling into the force. Her superior assigns her as a meter maid. Confused and frustrated, she goes about her day and attempts to make the best of it. By the end, she has angry patrons. The next day she stops stops a weasel purse snatched and is berated upon her return to the station by Officer Boggs for abandoning her post and taking matters into her hands.

An otter woman interrupts the reprimand and inquires about her missing husband who has been reported several days ago with no results. Judy accepts the task, ensuring the poor woman she’ll find her husband. Boggs allows her 48 hours to crack the case, if not, she is to hand in her badge for insubordination.

The following morning she resumes her post and keeps an eye out for a fox she noticed was being shady during her previous days. She cons the con fox, Nick,  into helping her find the lost otter. He proves resourceful and through a series of leads they eventually find themselves in a case even bigger: Several animals have gone missing recently. Not only that, but all are predators. Somehow the predators are returning to their ‘savage’ state.

Together they solve the case, but they come to find out someone else was pulling the strings all along.

And that’s where I will stop cause it’s an injustice to this film to spoil it (unless you’re Zach and you want to tell your theories to your neighbor in the theater!)

Like what we said in the podcast, we both loved this movie. It’s one I’ve been looking forward to since it was announced at D23 and it did not disappoint. The film touches on subjects that apply to our day and age very well. Disney has always been good about teaching lessons through their animation, but wow, this one was heavy and it’s something adults really need to hear. Sure, the overall theme is “You can be who you want to be”, but it teaches about how wrong and cruel biases, stereotypes, racism, and you can argue sexism. The directors have stated that the animals are not meant to represent certain races, but as a viewer, you can’t help but interpret them to races we know as humans. Every animal has its own characteristic, as we as humans know from observing animals in the wild. Like, how bunnies are generally cute, or wolves howl at any provocation, or slow sloths, or grumpy bisons. And while some of these are true, they are all members of society with their own dreams and ambitions. Then there are people like Judy who want to break the chain and want to do something because they want to and not let societal expectations get in their way.

It also teaches remorse for doing someone wrong and apologizing and forgiveness. By the end of the movie, there is so much positivity and hope in Zootopia, I really wish something like this could happen in our world today so we could live in harmony.

As always, the animation was gorgeous. I loved the care put into each species in their movements and textures. Excellent voice casting. Humor for kids and adults alike. Great score. Basically everything about this movie was excellent and is definitely going to be in my top five for 2016.