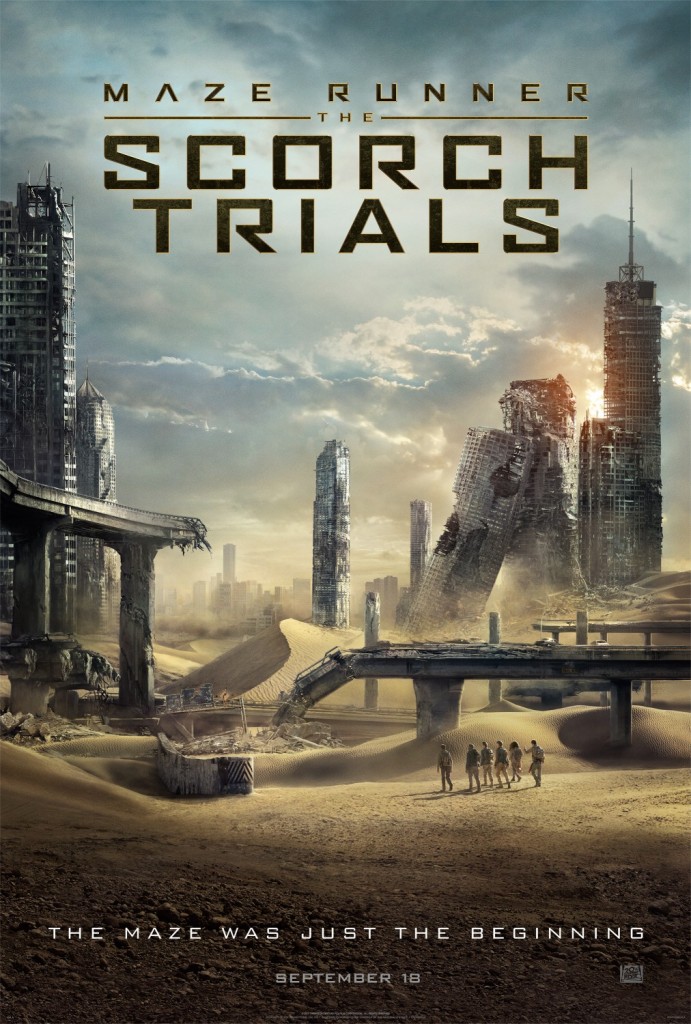 The Scorch Trials starts where The Maze Runner left off. Thomas and the remaining Gladers are held in a facility of their rescuers with other kids that remain from mazes throughout the world. After befriending the odd outcast, Aris, at their new ‘home’, come to find out these people they thought were for good are part of WCKD, harvesting fluid from the maze survivors to find a cure for The Flare (a zombie making disease, basically?), and the act is so inhumane, their deeds cannot be trusted. With the help of Aris, the Gladers make their great escape to the outside world aka The Scorch.

They outrun (yes, more running, though not as much as the first) the WCKD pursuers and Flared victims across the desolate remains of the world and form alliances along the way – The Right Arm – to confront WCKD and free all in the facility.

The film ends with Theresa turning against her fellow Gladers, claiming WCKD is for the better good, quoting Thomas’ own words from before he entered the maze, Minho is captured and the encampment of The Right Arm is set aflame. Thomas vows to rescue Minho and take down WCKD.

In looking up the wiki to double check my plot points, oh boy there are a lot of differences between the book and the movies! Lots of side plots are eliminated for simplicity sake, I imagine…

Anyway. In our brief review on the podcast, Zach and I admitted to both really liking the film. The overall quality of the film went up by a lot, and I attribute that to the success of the first film. The first film only took place in one location, thus a large budget wasn’t necessarily needed, so obviously they needed a bigger budget to do more with locations and special effects now that we get to see the state of the world. The actors felt more in their roles as well with a little more experience under their belts. Not to mention the surprise appearance of Alan Tudyk!

It’s not that I’m heartless and don’t like romance (oh boy, cause I do), but I sure appreciate that the Maze Runner series doesn’t present the romance aspect of it as super crucial, cause obviously not being a zombie and saving the world would take precedence. It’s obvious Thomas and Theresa are going to be a thing and it’ll be a matter of trust and acceptance later, but I’m grateful for the direction things go. I also really like Thomas as a character. A little reckless, sure, but he asks questions and he’s a very active protagonist and gets things done.

If you’re a fan of YA Dystopia, definitely check out The Maze Runner/The Scorch Trials. It’s not particularly new as dystopia as it is still very much a thing, but it’s an enjoyable view with some unique elements to it. Seeing as the movies are very different than the books, tread cautiously on that?