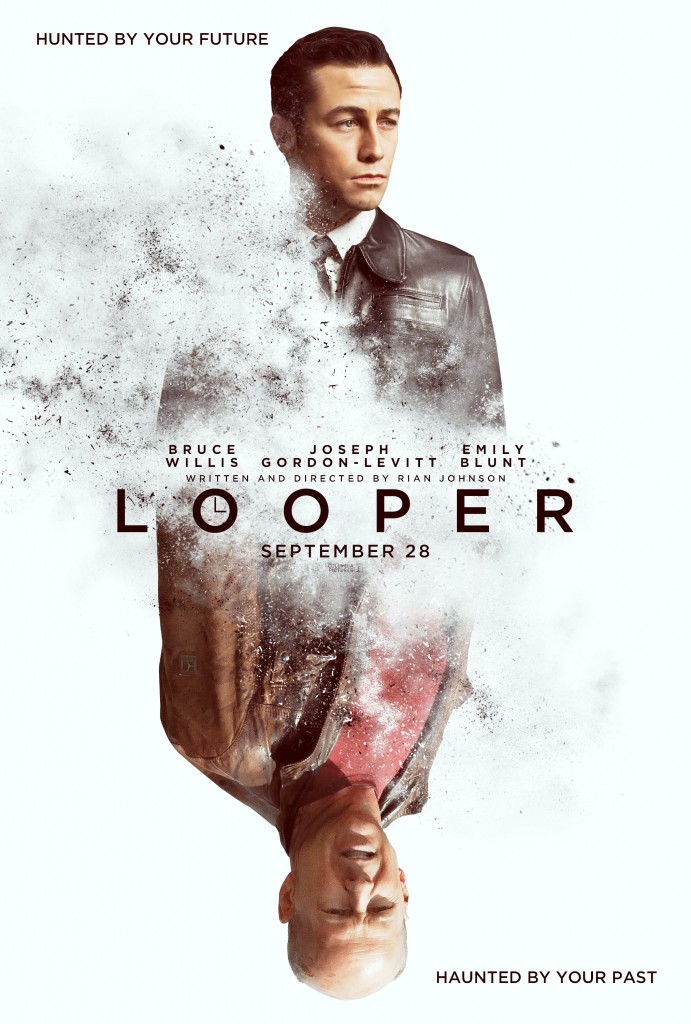 Looper is definitely a breath of fresh air after the last couple years of remakes, sequels, and movies based off TV series or books with it’s completely original story. The story takes place in the near future. Time Travel hasn’t been invented yet, but 30 years in the future from there it will have been. Gangsters find it easier to dispose of bodies through time travel than through normal means. There are hitmen called “Loopers” that are tasked with killing the people the mob wants gone until finally they are presented with killing themselves and retired to live the live for the next thirty years.

In Joe’s time (our future/present of the movie/past for some), the economy is pretty much crap (we’re apparently on the silver and gold standard again?) and a small percentage of the population has been born with TK (Telekinesis). It’s a cool ability but doesn’t amount to much more than a parlor trick for most people.

Joe’s noticed that people’s loops have been closed more and more frequently (the term when a Looper kills his future self) when he notices that his next target is himself. He hesitates and Old Joe gets away. When that happens, the mob starts to go after both Joe and Old Joe. If Joe can catch him, he thinks his life will go back to normal. Meanwhile, Old Joe is determined to change his past as during his capture his wife is killed and he blames the man supposedly closing Loopers loops, the Rainmaker. In Old Joe’s time, he’d been like a one man army and been taking over the territory of most of the mob throughout the world. Old Joe finds out some info and thinks it’s a birth date of a child 30 years ago.

I really can’t go much farther than that without some MAJOR spoilers, but this will eventually make sense once you’ve seen the movie. I will say that this movie almost feels like two different types of movies (an action movie and something else) , but brings it all back together at the end. There are some AMAZING performances from Joseph-Gordon Levitt and Pierce Gagnon, who plays Cid. Joseph-Gordon Levitt may be one of the most under-appreciated actors of our time as he’s able to imitate and become just like Bruce Willis, complete with mannerisms, voice and facial expressions. Pierce Gagnon is able to perform some remarkable emotional feats, going from super intelligent to crying to intimidating to scared kid. I think these are two Oscar worthy performances if I’ve ever seen them. It’s too bad that it’s unlikely to get the recognition since it’s a Sci-Fi movie.

The movie itself is great, with some interesting plot twists and great scenes with time travel mechanics. However, that’s really my only complaint about the movie is the time travel mechanics that it uses in the beginning and the middle of the movie is not what they go by by the end. In fact, it’s possible it could have been what Doc always worried about from Back to the Future and caused the universe to explode in on itself. They showed time travel working in one way then negated it in the end, which by the end of the movie just left me shaking my head, wondering how things could have worked. But this is good as it got the me thinking and the rest of the movie is great. There apparently is even in theater commentary you can bring in to the theater with you that might answer some of those questions.

Looper is hard to say how it will be looked upon in the years to come. It’s possible it could be a cult hit, or a major movie that is worth the rating. I think they might have restricted the potential audience a little too much with the R rating that might have hurt it’s overall appeal but the movie will be in people’s mind for years to come.