Welcome to our episode for June 29, 2012! Krista is back from her surgery and sharing in all the nerdiness. We have some signs of the Apocalypse this week from an Avatar themed nightclub to Channing Tatum somehow being a star. If you are a Legend of Korra fan, make sure you check out Krista’s post on the series here.

A little while ago SyFy has great success with a movie that pitted rivals Debbie Gibson and Tiffany together (and even had an epic girl fight). Apparently they are trying to get lightning to strike twice with having Danny Bonaduce and Barry Williams fight over a giant 30 foot Bigfoot they are trying to catch. Not only that, but they add Alice Cooper getting kicked by said Bigfoot like a rag doll. Amazingly, the movie is called Bigfoot. Imagine that.

Looper looks more and more interesting (even with having extra scenes to make China look more cool. In China.) and we finally have a new trailer that explains some more things.

One of the creepiest things ever is a wall of talking Teddy Ruxpins (which I wonder how they got so many) that take the sad pulse of the internet by saying random posts. I have no idea why someone thought this was a good idea.

I wasn’t sure what to think about Robot & Frank when I first heard about it. It sounded like it would be rather dull with an odd gimick. However after seeing this new trailer, I actually think that it sounds rather interesting.

Also we have a trailer for a new movie called Prototype that’s about a man that develops a new one of a kind robot and then implants his brain in it. It looks rather interesting.

An Avatar-themed Nightclub in South Africa called Avastar. WHY DOES THIS EXIST!?

National Geographic Channel is making a new reality TV series based on Midtown Comics in New York City. It does look to be much better than like Pawn Stars or other recent realty shows (Duck Dynasty *shudder*). Krista’s been to this store and can testify of its awesome.

In a funny fan video, we have Cobra Commander meeting with his Financial Advisor. It’s safe to say that things aren’t going very well for Cobra.

Valve has a pretty great sense of humor as we seen from all the Portal references we’ve covered already. I haven’t played Team Fortress 2 (though it is available free from Steam) but this video was too funny to pass up. One of the characters is Pyro who just seems to kill everyone. However this video shows what things look like to him. He’s just trying to spread some joy around!

We have a new trailer for the Japanese Rurouni Kenshin movie coming out later this summer and all that Krista and I can say is WE WANT THIS MOVIE MOVIE IN OUR LIVES! Seriously though it just looks completely awesome and probably accurate to the anime series but awesome looking. They really didn’t skimp out on this one from the looks of it. Personally I hope that it gets licensed and dubbed state-side.

Here is a great fan animation tribute to all the Evil Dead Movies that is short but awesome.

If you know Deadpool at all, you’ll know that he’s freaking crazy and also breaks the fourth wall constantly. Well someone has made a fantastic short fan film of Deadpool that is amazing.

If you’ve ever seen Evangelion you’ll know that Gendo Ikari is not a nice man. And also never happy. Well apparently according to Schick Japan, his only problem was he was irritated by his chin strap beard. Once it’s off, he’s happy! Get this man a razor and never let the stubble come back! 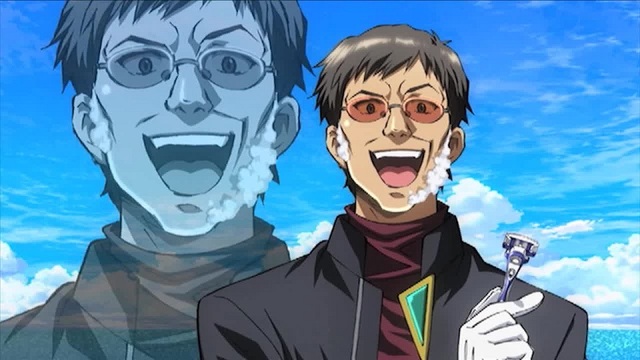 It looks like the real website has since made him a little less happy. But you can go here at Kotaku to see more of their Evangelion shave products.

Okay, Someone Made an Avatar-Themed Nightclub

Southwest will try out live TV on 5 planes

Curry fights tears as she says goodbye to ‘Today’

Host lightens up `Late Late Show’ as lights go out

Oprah Winfrey to guest on ‘Keeping Up With the Kardashians’

There’s Going to Be a Firefly Reunion… Panel at SDCC

Aperture Science Is Having a Turret Sale

It’s the Rurouniest Time of the Year

Oh, So That Was Gendo Ikari’s Problem All Along