We’re on the road for this episode as we’re recording live (at least for us) from St. George, UT. Krista, Melissa and I cover our experience at Tuacahn seeing Aladdin, then we cover the change to the British version of Avengers, Joseph-Gordon Levitt on SNL, A Psycho prequel, and possibly one of the weirdest animes slightly based off real life events.

First up, we have a mixed trailer which includes the new series by Russel T. Davies (formerly of Doctor Who) which sounds weird and fun: Wizards vs Aliens.

More and more I wish I could see Joseph-Gordon Levitt return to his comedy roots (He was still too brooding it 500 Days of Summer) because he is always hilarious and puts everything into his SNL hosting. Here is the commercial for his episode.

Now I may be a little biased since their video games have been so funny, but LEGO is doing another Star Wars Special episode and in my opinion looks much better then the one that we talked about a few weeks ago from the Robot Chicken people.

Next up we have a trailer for the sequel to Dead Island, called Dead Island Riptide and while not as sad or infamous as the first one is, this one still is pretty high up on the sad meter*. (*sad meter patent pending)

This video is silent on purpose, and isn’t the original video (because the original poster got cold feet or something. Normally I wouldn’t post something that wasn’t the original source, but there is no other choice.) Someone decided that they wanted to make a fan-made Star Wars anime, and it is VERY well done. It looks like a lot of the anime from the 1980s but I think that the franchise could really use something like this. But Lucas is too focused on ruining his own brand.

Someone decided that their daughter made the perfect child Avatar, and added effects, so now we Baby Korra. It’s short. It’s sweet. But still cool.

The Nerdist YouTube channel is one of the best channels on internet, at least in my humble opinion. (They also host lots of podcasts including Thrilling Adventure Hour, my favorite podcast ever.) Here they have a new music video with Ben Folds Five with the Fraggles. Continue being awesome Nerdist and the Muppets.

Lastly, not a video, but here is an image of the new Sega/Nintendo game. 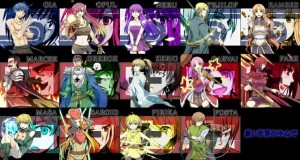 It Is Truly the End of Times, as Sony Decides It’s Going to Reboot Manimal

Wizards Vs. Aliens Looks Just as Breathtakingly Original as Its Title Suggests

‘The Office’: Stephen Colbert will stir up Treble, er, trouble

Regis Philbin back on daytime TV for ‘Rachael Ray’

Lego Darth Maul May Be Dealing with Some Issues

And Here’s the Comics News Marvel Is Spoiling Today